The army’s most senior woman who served in Iraq and the Balkans has revealed she once had to sign a declaration confirming she would leave the armed forces if she ever got pregnant.

Sharon Nesmith, originally from Northumberland, joined the army in 1992 and earlier this year was announced deputy chief of the general staff – but she said her journey wasn’t always easy as she made her way up the ranks as attitudes towards women were changing.

Speaking to The Times, the mother-of-two who is married to a tree surgeon revealed the sexism she faced during her three decades in the armed forces – and how she is making sure other serving women are not met with the same obstacles.

Sharon Nesmith, 52, is the highest-ranked woman in the British Armed Forces – but has revealed she was once asked to sign a document declaring she would quit if she got pregnant 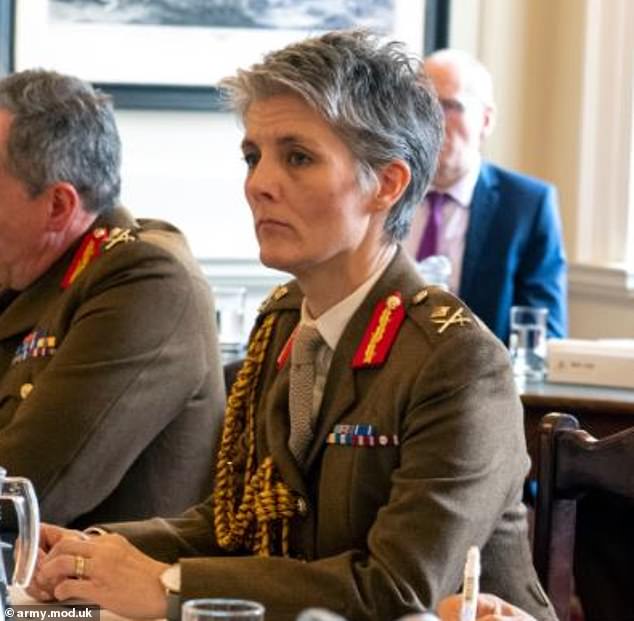 The 52-year-old juggles her high-powered job with motherhood as she and her husband Walker, a tree surgeon in his 60s, raise their two teenage sons together.

In 2015, Sharon told the Telegraph her husband tended to do the school run and also took on the lion’s share of chores around the house. At the time, the family was living in service accommodation near Northwood, the location of the UK’s Nato headquarters, with a black Labrador called Lottie.

In her new role, which she formally assumed two months ago, Sharon has to travel frequently and spoke to the newspaper from Fort Urwin, the US military base in the Mojave Desert, California. She was stationed there for just 24 hours before being whisked off to the other side of the world in New Zealand. 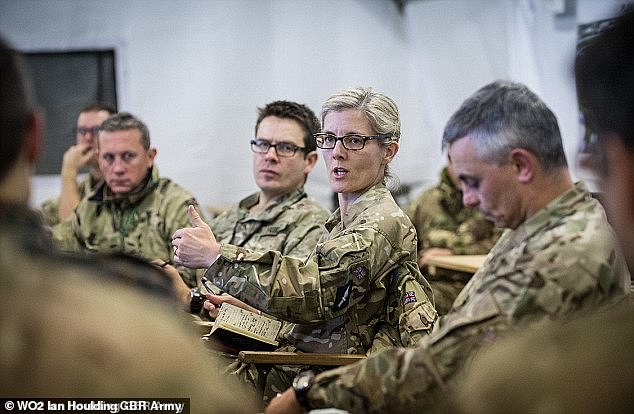 During her 30 years in the British Armed Forces, Sharon has continued to break down barriers and assume roles never before held by women

Despite facing obstacles due to her gender when she first joined the army 30 years ago, Sharon has continued to break barriers throughout her career – including becoming the first female brigadier and the first woman to be made a two-star general.

When she was announced as deputy chief of the general staff of the British Army, she was also the first female British Army officer to hold the position.

After her appointment, Sharon said: ‘I am deeply honoured to be appointed as the Deputy Chief of the General Staff at such a pivotal time for the British Army.

‘I am excited to be playing my part in leading the Army’s mobilisation to meet today’s threats, and the delivery of our Future Soldier’s bold modernisation agenda.’

Sharon, who was raised in Northumberland, first joined the Royal Corps of Signals in 1992 and was stationed in Iraq, Germany and the Balkans during her early years.

WOMEN IN THE ARMY

All roles in the military have been open to women since 2018.

Women already serving in the Army are able to transfer into infantry roles, including the Special Forces.

Women are also able to apply to join the Royal Marines.

Men and women are on the same pay scale and are paid according to rank. The Army promotes people based on their performance, capability and potential. Every soldier receives an annual report and the best people are selected for promotion.

Men and women get the same high standard of training. All role related fitness standards are the same, and unrelated to gender. This makes sure that everyone is fit enough to do the job.

Looking back on her time in the army, she admitted there had been some occasions where she had experienced sexism and would have liked to call it out in hindsight – although she could not recall a specific incident when asked. She also revealed she was once asked to sign a form confirming she would quit if she fell pregnant.

Since 2015, women have been able to apply for all roles within the British Armed Forces, after the Women in Close Combat review was published a year earlier. The review recommended an end to the ban on women in frontline infantry and armoured corps roles.

Speaking to the Telegraph in the same year, after her promotion to brigadier, Sharon said: ‘The perception is that [the British Army] is not necessarily as fair. But I’m not sure you can have a big bang approach to these things. It is a culture and an ethos about how we work.’

While she insisted she has always felt like part of the team and that the army has come a long way in terms of gender equality, Sharon admitted there are still some ‘pockets’ of issues that must be rooted out – including allegations of sexual harassment and assault.

As the nature of warfare changes, Sharon admitted she is not quite up to scratch with the newest technologies – and joked her sons were much better at much of it than she is.

‘I had a go with the virtual reality headset and it was embarrassing,’ she said, adding her boys could navigate it ‘in their sleep’.

Sharon added that, while she wasn’t particularly gifted with technology, she was ‘not the future’ of the British Armed Forces.

In the time she is able to spend with her family and friends, it is no surprise that Sharon likes to keep fit and has run marathons in the past, which has partly been motivated by her desire to keep up in her job.

Speaking to the Telegraph in 2015 she revealed she often went fell running near her family home in the Lake District to combat the fear of people saying: ‘She’s not quite fit enough’.

As for her leadership skills, Sharon said she used ‘a healthy dose of emotional intelligence’ when managing other soldiers and tried not to take things too seriously.

As a mother herself, she also stressed the importance of making sure service personnel were able to make their family lives their priorities.

Speaking about her husband and sons, she said she was ‘lucky’ they were so supportive.

‘The fact that that my family life is equally as important, if not more so, than my career, that perspective is slightly different [to men] in a really good way,’ she said.

And although she will be spending a little more time away from her family since assuming her new role, Sharon ensures she has home comforts with her so she doesn’t miss them all too much – including Sam Smith and Ed Sheeran music and a bath mat from home, which she takes everywhere with her.