He said his record as governor of California showed that tackling carbon emissions can go hand in hand with creating jobs and wealth.

With world leaders preparing to head to Scotland for a major climate summit, he told the BBC: ‘They are liars, they are stupid.

‘Or they don’t know how to do it, because we figured how to do it and it’s all about having the balls to do it.’

The actor has championed environmental causes since leaving office 10 years ago and has clashed frequently with fellow Republicans – including former President Trump – on the climate crisis. 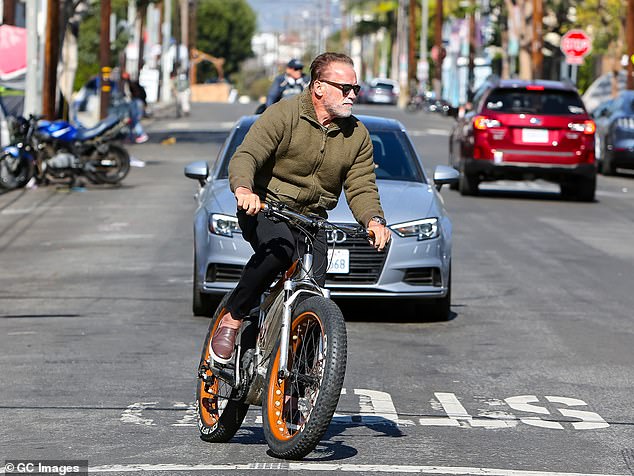 His intervention came a day after after House Republicans announced they were sending their first conservative-only delegation to the annual United Nations climate summit.

Although many of the Republican Party’s loudest voices rail against efforts to tackle climate change as anti-business, they said part of their mission was to show that conservatives cared about the environment and wanted to be part of finding a solution to climate change.

But the Terminator star also sounded a note of caution on the COP26 summit, saying there was only so much that leaders could do.

He said: ‘It’s very important that we have a positive attitude, that we can see it and we all work together because not one person can deal with it themselves. It’s a huge undertaking.’

And he urged shoppers to think about the carbon footprint of products in stores.

‘Every time you buy something from overseas, that is evil for the environment – this is like the worst thing you can do.’

Schwarzenegger pushed renewable energy initiatives during his time as governor and championed the Global Warning Solutions Act to cut emissions to 1990 levels by 2020.

World leaders are due to arrive in Glasgow on Sunday for the annual United Nations Conference of the Parties.

It is the 26th time it has been held, making this event COP26.

The aim is to agree measures to reduce greenhouse gas emissions to keep the global temperature from rising more than 1.5 degrees Celsius.

Some 20,000 people will attend talks, including government representatives, scientists and policy experts.

The Republican delegation will include Rep. Dan Crenshaw.

‘There’s a false choice peddled by the left: choose between reducing emissions or affordable, reliable energy that powers our economy,’ he said.

‘We’re going to COP26 to advocate for those solutions.’