Arnott’s has opened its ‘biscuit vault’ and released the secret recipe for the iconic Monte Carlo biscuit. For the first time in history, Australians will be able to bake the classic cream and jam biscuits in their own kitchen – and they take just 24 minutes to make.

‘There is so much love and care that goes into making each and every biscuit that comes out of the Arnott’s ovens in our bakeries across the country,’ Arnott’s culinary chef Vanessa Horton said.

To encourage Australians to stay at home, put on their aprons and bake together, Arnott’s will be sharing some of its secret biscuit recipes to the public every week. The ‘Arnott’s Big Recipe Release’ will see Australia’s largest (and oldest) baker unveil the recipe – complete with instructions, until social distancing regulations are lifted.

‘We know how important our biscuits are to Australians, both locally and living abroad, in helping them come together with family and friends and feeling connected,’ Ms Horton said.

How to make Monte Carlo biscuits 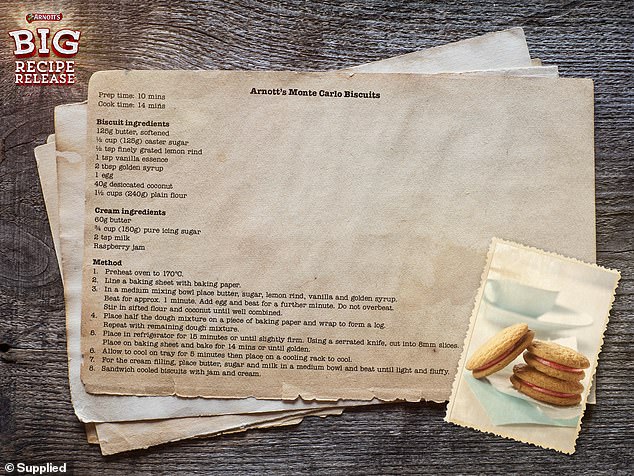 For the first time ever in history, Australians will be able to bake the classic cream biscuits in their own kitchen – and they take just 10 minutes to prepare

‘That’s why I’ve personally adapted and tested each of the ‘secret’ recipes we’re revealing to the public, so they can find new ways to come together and share a biscuit, in this time of need.’

The decision to release the top secret recipe comes in response to the social distancing regulations fuelling a 300 per cent spike in baking-related searches.

The report found the average Aussie household has stockpiled enough flour to last 65 days, and the volume of sugar purchases have increased by 65 per cent.