Around 190,000 people missed vital heart ultrasounds in England during lockdown

Around 190,000 people in England missed out on crucial heart ultrasounds during the Covid-19 lockdown, a charity has warned.

The drastic decline in the vital tests will ‘ultimately lead to deaths’, the British Heart Foundation (BHF) said.

Echocardiograms, also known as echo tests, are ultrasound scans that look at the structure of the heart to see if it is working properly.

They help doctors spot or follow the progression of heart conditions, such as heart failure, heart disease and damage from a heart attack.

Only 87,902 echo tests were carried out across England in April and May, compared to 274,235 completed in the same months last year.

It comes amid warnings of the NHS post-Covid backlog, in which millions of patients are waiting for care that was delayed because of the pandemic.

Health bosses fear the number of people waiting for NHS treatment will double to a staggering 10million by Christmas.

How vital heart ultrasounds have dropped during lockdown. In February, the number was at the expected level. Only 87,902 echo tests were carried out across England in April and May, compared to 274,235 completed in the same months last year (a difference of almost 190,000)

The BHF said there has been a temporary pause on cardiology care, apart from the most urgent of cases, since Britain’s lockdown began in March.

Some 41 per cent of of heart and circulatory disease patients have had a planned test, surgery or procedure cancelled, such as a heart imaging test, surveying from the BHF has found.

And GP referrals — when a person is referred for an echo test based on symptoms they have presented to their GP with — have fallen, which the charity says would partially be driven by people’s fears of catching the coronavirus or putting pressure on the NHS.

Delaying a diagnostic test or treatment could have a knock-on effect for someone’s health, said Dr Sonya Babu-Narayan, associate medical director at the BHF and consultant cardiologist.

She said: ‘Echocardiograms and other tests are used to diagnose and monitor a range of heart and circulatory conditions and are often among the first steps in someone’s treatment journey.

HOW MUCH DID ECHO TESTS DROP IN EACH REGION?

How much echo tests dropped in each region across April and May from February 2020:

‘Delaying them could have a devastating knock-on effect on the rest of their care, preventing them from accessing the specialist treatments they may desperately need in time.

‘Ultimately, this could lead to patients becoming sicker as they await care and, ultimately, more deaths.’

The latest figures from NHS Digital show the number of echo tests dropped drastically from February, when there were 134,134.

Things started to pick back up again in May, reaching 52,076 tests, but are still not back to normality at just a third of the expect number compared to 2019.

Tests dropped by 67 per cent in April and May compared with February, the figures show.

By the end of May this year, there were 92,967 people on the waiting list for an echo test across the whole of England.

Some 62 per cent (57,242) of those had been on the waiting list for six or more weeks, a sharp increase from the four per cent in February.

Less than one per cent of patients should wait six weeks or longer for a diagnostic test, the NHS Operating Framework says. 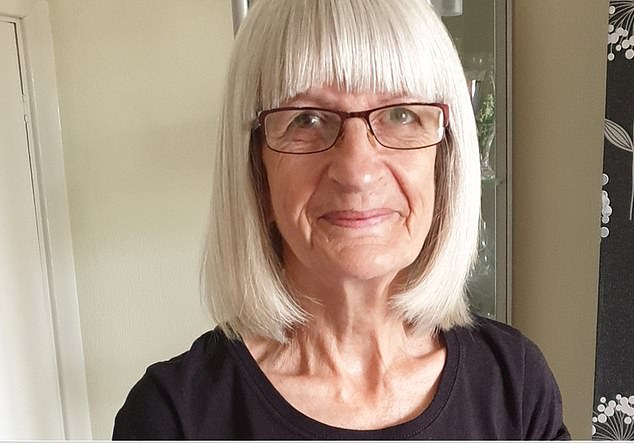 Diane Phillimore, 62, from Calne in Wiltshire, has been waiting for an echo test appointment since March, when her original one was cancelled in light of the Covid-19 crisis. She said: ‘I feel like I’ve been left in limbo’

The delays add to the backlog caused by a hold-up to cancer screenings, other key diagnostic tests like MRIs, and routine operations.

Five-thousands heart attack sufferers in England missed out on life-saving hospital treatment due to the Covid-19 pandemic, a study has claimed.

A University of Oxford team used data regularly collected by NHS Digital from hospital trusts in England to get up-to-date information about admissions.

They found admissions for any ‘acute coronary syndrome’ — a sudden reduction of blood to the heart — dropped from a monthly average of 13,075 to 10,118 in March.

They plummeted to 8,739 in April before slightly increasing to 9,756 in May, findings in the Lancet revealed.

Overall between January and May, there had been around 8,000 fewer admissions for acute coronary syndromes than would be expected.

Some 5,000 of these were for heart attacks specifically, which is medically known as a myocardial infarction.

The researchers looked at a certain window, March 23 to March 30, and found hospital admissions for heart attacks fell 35 per cent.

Up to a quarter of people who suffered the most severe heart attack — a complete blockage of an artery — did not seek help, figures suggest.

Admissions are now picking back up again because the coronavirus is fizzling out, according to researchers at the University of Oxford.

But patient confidence is nowhere near pre-Covid levels as Brits still fear catching the coronavirus if they go to hospital.

Experts warned the risk of death from delaying heart attack treatment is higher than picking up Covid-19 at hospital.

Dr Babu-Narayan said: ‘The NHS is now facing a cliff edge as it contends with resuming services and tackling a significant and growing backlog of treatment, all while continuing to fight Covid-19.

‘These challenges are great, but they are not insurmountable. Restoring and maintaining care for patients living with long-term conditions, such as heart and circulatory diseases, must now become a priority.’

Diane Phillimore, 62, from Calne in Wiltshire, has been waiting for an echo test appointment since March, when her original one was cancelled in light of the Covid-19 crisis.

She was diagnosed in July last year with aortic stenosis – a narrowing of one of the four heart valves called the aortic valve. It can cause symptoms of chest pain, dizziness and shortness of breath.

Monitoring of this condition is crucial to look for progressive disease and treat it appropriately.

The walls of the heart can thicken because the organ has to work harder to pump blood through the narrow valve opening. Over time, the extra tissue takes up more space which allows less room for an adequate amount of blood to be supplied to the body.

This may lead to life-threatening damage to the heart or heart failure.

Ms Phillimore was originally referred for an echo in December to reveal how far the disease has progressed and if she will require heart valve surgery in future.

She’s now been waiting seven months for an appointment and is trying not to worry.

Ms Phillimore, who has lost her partner, mother-in-law and brother-in-law to heart and circulatory diseases in the last four years, said: ‘I’m not really an anxious person but I have been worried about the delay to my echo appointment.

‘I feel like I’ve been left in limbo. I do understand that there is a huge backlog of heart patients like me waiting for tests and procedures due to Covid- 19, but I would like to know what my situation is.

‘If I do need surgery, I’d like to have as long as possible to prepare myself mentally for it.

‘Since the pandemic began, it has felt like heart patients have been neglected.

‘For many, lockdown is over, and life is returning to normal. But for people like me who have a heart condition that needs monitoring, it has left us worried and uncertain about what happens next.’

The BHF says heart patients have been hit doubly hard by the Covid-19 pandemic, revealing yesterday that admissions for heart attack patients had also dropped.