Arsenal are leading the race to sign Napoli striker Victor Osimhen this summer, according to reports in Italy – but it could set the Gunners back £84million.

Osimhen has netted 17 goals for the Naples outfit this season and has his admirers in the Premier League after some strong displays for both Lille and in Serie A over the last few years.

Arsenal will be in need of new firepower next season as they chase Champions League football, with both Alexandre Lacazette and Eddie Nketiah – the club’s only recognised strikers – on course to leave on free transfers at the end of the campaign if they cannot agree new deals. 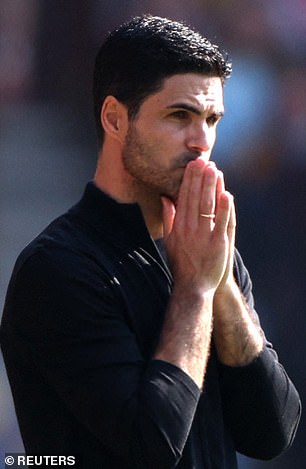 Arsenal are the leading candidates to sign Napoli’s Victor Osimhen, according to reports

And the Gunners are already making moves to revamp their frontline ahead of next season – now ahead of the pack in the race to sign Osimhen, as reported by Gazetta dello Sport.

Arsenal have been looking at Osimhen ‘for many months’, it claims, after letting Pierre-Emerick Aubameyang go to Barcelona for free and being left with just two senior forwards.

The north London outfit had been assessing talent from Serie A in January – keen on a move for Fiorentina’s Serbian striker Dusan Vlahovic before being beaten to his signature by Juventus, and have now turned their attentions to Osimhen, it says. 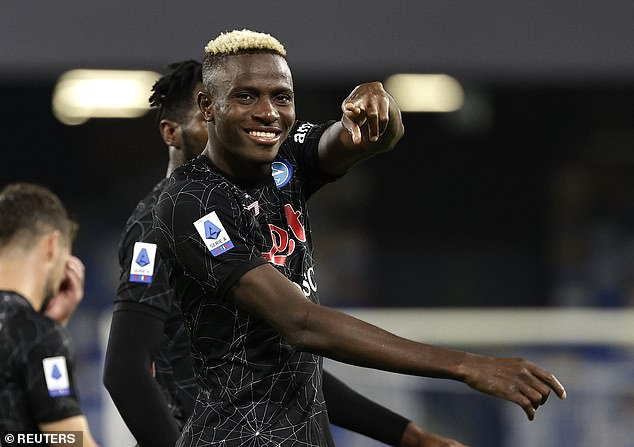 In fact, Osimhen is even more alluring for Arsenal than Vlahovic given his ‘physicality and athleticism’, attributes that the club are looking for in a new striker.

However, Arsenal may baulk at Napoli’s price tag for Osimhen, with the club reportedly set to hold out for a huge 100million euros (£84m)

The player himself is ‘aware’ of interest from England, it goes on, and Arsenal won’t be the only Premier League side looking at the Nigerian.

Manchester United are ‘thinking about’ a move for the player, the report claims, while Newcastle – backed by their Saudi millions – are also monitoring the situation and would be able to meet Napoli’s huge demands.