Arsenal boss Unai Emery urges his players to clear away any negativity in top four race after back-to-back losses: ‘Our focus is on the present’

Unai Emery has urged his players to block out any negativity following the back-to-back defeats that have put a serious dent in their top four ambitions.

Emery’s Arsenal side head to Leicester on Sunday after successive and ill-timed losses at home to Crystal Palace and at Wolves.

Having had their hopes firmly in their own hands, the prospects of claiming a Champions League spot via their league position are now out of their control with three games to go.

Sunday’s clash between Manchester United and Chelsea guarantees one, or possibly both, of Arsenal’s top four rivals will drop points, potentially opening the door for the Gunners again.

Emery said: ‘We lost the last match [against Wolves]. We lost the one before that [against Crystal Palace] but our focus is on the present and Sunday because if we think negative with the next matches we can’t think positive with the matches before against Napoli and Watford that we won.

‘Each match is a new history, a new test and confirm if we can or not but being positive, working and recovering the confidence in our players, our work and looking forward to playing the next match.’

The major worry for Arsenal heading into the run-in was their away form. Those concerns have proved well-founded. 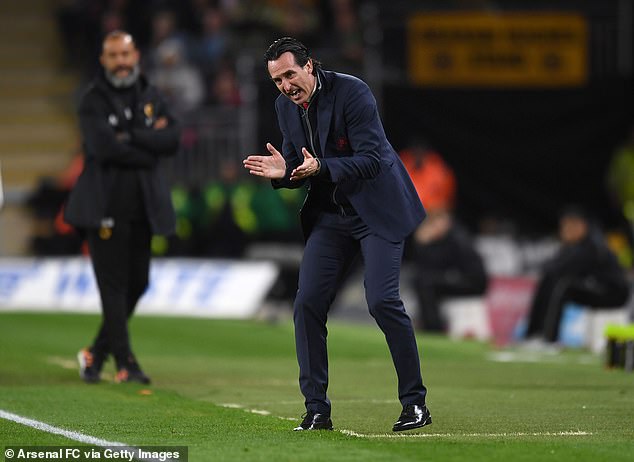 Arsenal, who only have just the ninth best league record on the road this season, had five of their last seven games away from home.

So far they have lost two of the three they have played, at Everton and Wolves, scraping a win against 10-man Watford in between.

Emery’s side have two more away trips left, Sunday’s to Leicester and then a last day date at Burnley.

But he refused to be drawn on Arsenal’s travel troubles. 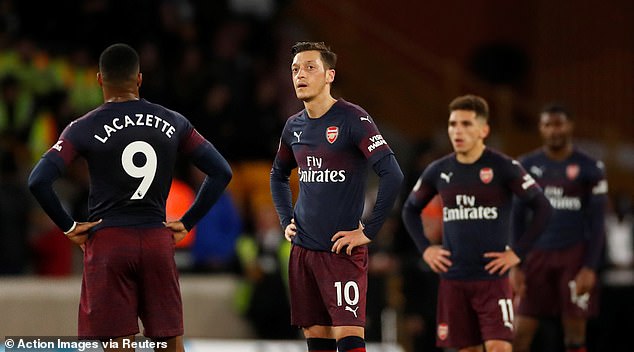 ‘Only the next match and prepare to work, give them the information, not a lot, not less, enough information to be ready to play.’

Emery could have striker Pierre-Emerick Aubameyang available again for their visit to the King Power Stadium after he missed the Wolves defeat due to a sinus procedure.

Arsenal’s head coach said: ‘He trained today and if tomorrow he can train we can think he is ready for Sunday. It is a possibility [he can start].’