Philip Day, 55, burnt down a secondary school after claiming he he was on a divine ‘mission from God’ to protect children

An arsonist who terrorised an innocent teacher, burnt down a secondary school and set fire to a £1.6million home after claiming he was on a divine ‘mission from God’ to ‘protect children’ has been jailed for 15 years.

Philip Day, 55, forced the unnamed teacher into hiding by sending him threatening messages and then burnt down the Cheshire school he worked at, which he falsely claimed was ‘a playground for paedophiles’.

He then went on to torch an innocent man’s £1.6million Tudor home during an eight-year campaign to ‘protect children.’

Quoting the Bible and claiming ‘God’ was ‘justifying his actions’ Day stalked the teacher in the false belief he had raped a pupil and falsely named him as a paedophile in videos and messages on Facebook.

The teacher received a chilling message whilst on holiday with his family from Day saying: ‘If I was you I would asked for police protection.

‘You have two options, hand yourself in to the police or hide. Your life as you know it is about to change.’ 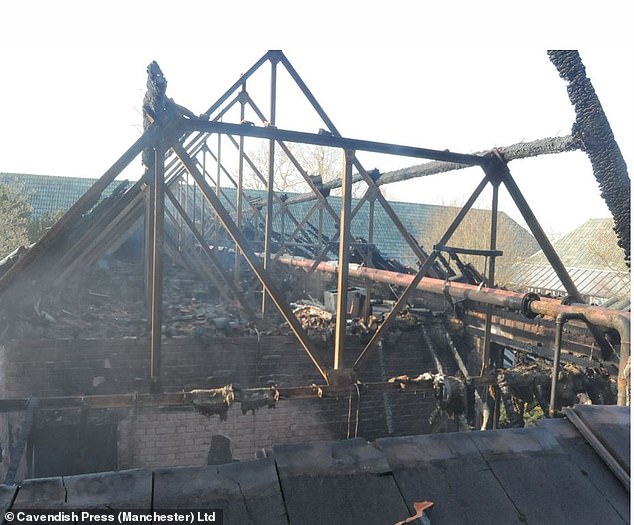 Day also forced an unnamed teacher into hiding by sending him threatening messages and then burnt down the school he worked at, the University of Chester Academy at Northwich. Above: the damage to the school’s roof after Day’s arson attack

Staff at the University of Chester Academy at Northwich, Cheshire (UCAN) were forced to place the school in lockdown after Day repeatedly turned up the gates or at open days demanding to speak to the headmistress about his wild allegations.

He also made social media videos smearing other innocent teachers as sex offenders and warning parents not to send their children to the school.

In messages on Facebook, Day accused staff of being ‘nothing short of evil’ adding: ‘I will make sure the truth is heard because the truth will set us free’.

Another post quoting verse 13:4 from the book of Romans in the Bible said: ‘If you do wrong be afraid for rulers do not bear the sword for no reason.

‘They are God’s servants, agents of wrath to bring punishment on the wrongdoer.’

Police and child protection experts repeatedly investigated Day’s claims of sexual abuse but found no evidence of wrongdoing at the school and no complaint was ever made by a pupil about sex abuse. 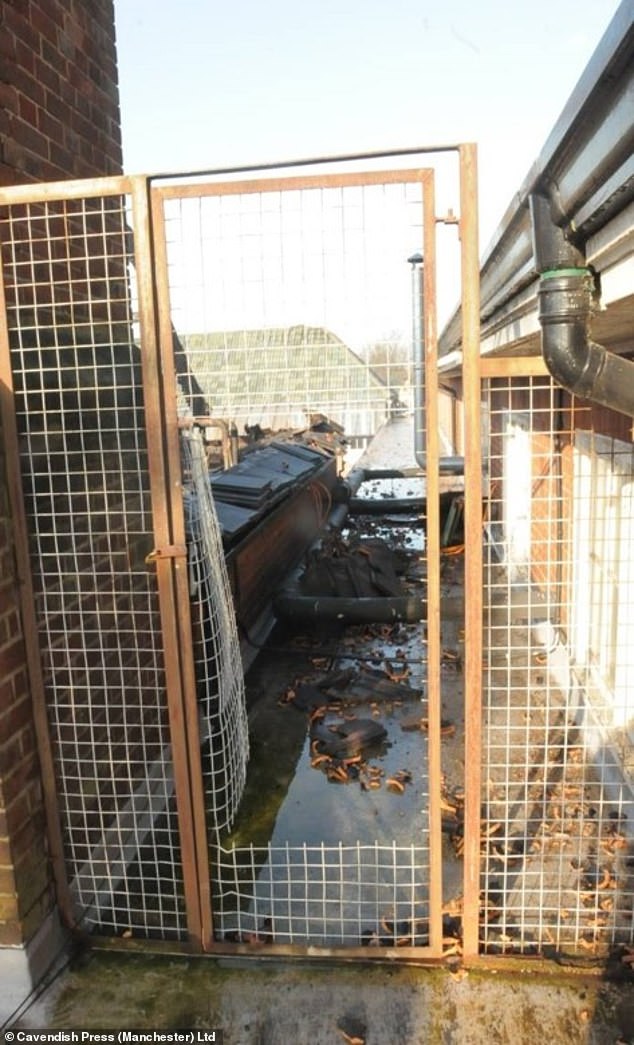 Staff at the University of Chester Academy at Northwich, Cheshire (UCAN) were forced to place the school in lockdown after Day repeatedly turned up the gates

The innocent teacher was so terrified he moved his family out of the area saying he was ‘paranoid’ Day would ‘come for him and harm him or his family.’

Officers quizzed Day for harassment in February last year but he was freed without charge.

Three days later he used petrol from jerrycans to burn down the school, causing £2.4m worth of damage.

When he was arrested it emerged the married father of two was having an affair with a single mother who was herself making unfounded claims her innocent former husband had abused their children.

During their affair Day used his wife’s car to drive 200 miles to burn down a 700-year old property in Saffron Walden, Essex on New Years Eve 2017 after his mistress told him her ex-husband was living there.

Luckily the house was empty at the time as the victim was away on a skiing trip with his new girlfriend but the pair broke up due to fears for her safety. 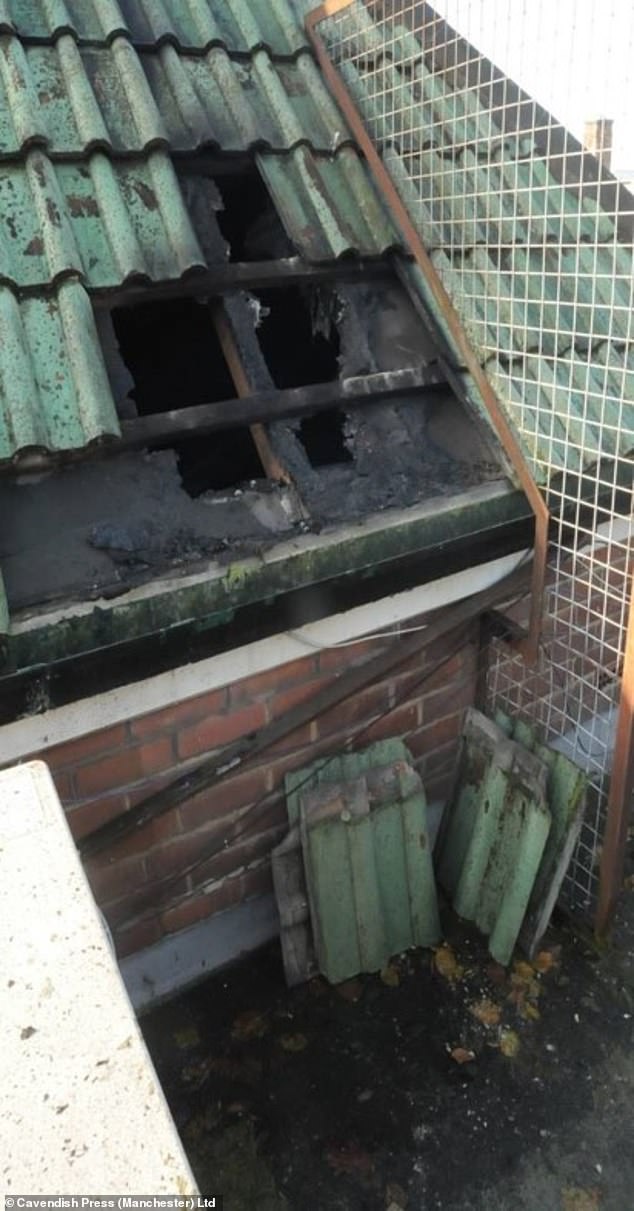 used petrol from jerrycans to burn down the school, causing £2.4m worth of damage

At Chester Crown Court, Day, from Runcorn, was found guilty of stalking and two charges of arson following a 31 day trial. He denied wrongdoing.

The campaign began in 2011 after Day became convinced a pupil at UCAN had been drugged and raped by a teacher on a school trip and he alerted staff and police.

Officers investigated in 2011 and found no evidence of any abuse.

In 2016 after repeated requests from Day, detectives informally spoke to a former student who claimed to have flashbacks of ‘people lying above her, ‘red eyes’, and the ‘rhythm’ of a ‘male body part’ but she refused to give a statement.

However Day obtained a covert recording of the meeting and began harassing the teacher and claiming the school, the police and the local safeguarding officer were involved in a cover up.

He posted ten videos on Facebook, claiming the school was a ‘playground for paedophiles’ naming members of staff that he thought were involved and even naming the pupil.

He also turned up at two open events at the school for prospective pupils and their parents.

On one occasion he was aggressive and caused fear and alarm to staff, parents and children, aged as young as eight.

In 2017 he was acquitted of making threats to kill the teacher but afterwards recorded a ‘prophetic’ selfie video on the court steps saying: ‘This is just the beginning.’

He then began posting messages and videos about one of the teachers vowing to ‘get to the truth’ and on the first day of term and was seen waiting outside UCAN in a van with the warning: ‘I’ll wait here each day until he is suspended.’

Day falsely claimed the teacher had ‘connections within the police and Freemasons to keep him from being prosecuted’. 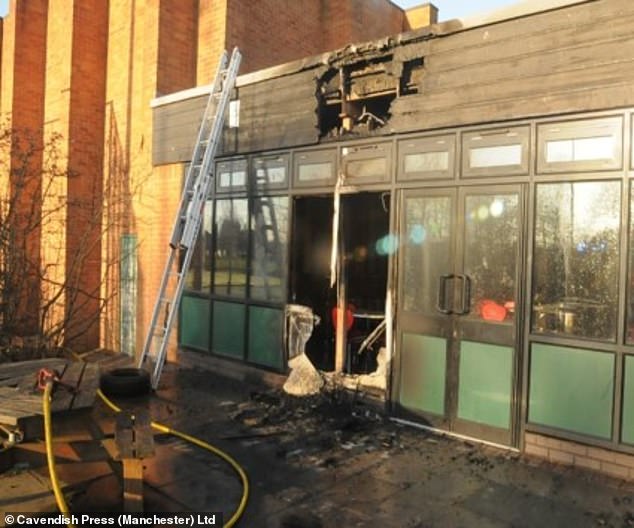 Day also posted ten videos on Facebook, claiming the school was a ‘playground for paedophiles’. Above: the damage to UCAN school

A civil injunction was eventually issued against Day removing his campaign from Facebook, and banning him from attending UCAN.

But the innocent teacher told the court: ‘I saw the videos and then, for my own sanity, stopped watching them.

‘I couldn’t keep on watching someone saying these things. I felt like I was on the run from my own life.

‘Comments were being put underneath it and I felt like I was going mad, because I saw posts criticising what he was doing and I’d look again and they weren’t there.

‘I felt absolutely awful, anxious, scared. I have never been threatened, never been in a fight, so having my life threatened was something that was a major concern.’ 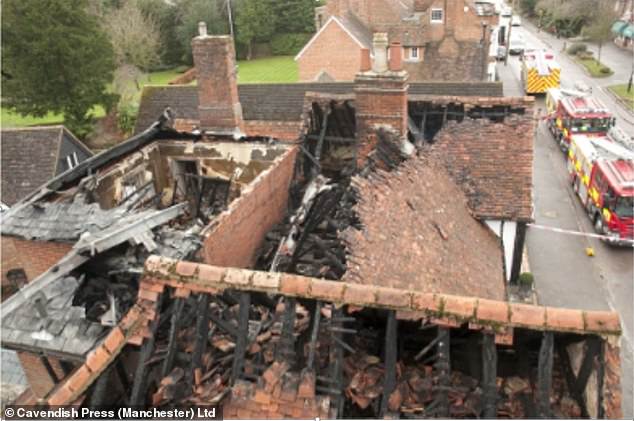 The married father of two was having an affair with a single mother who was herself making unfounded claims her innocent former husband had abused their children. Day used his wife’s car to drive to burn down a Tudor property in Saffron Walden, Essex on New Years Eve 2017 after the woman told him her ex-husband lived there

‘It seemed like everything just kept on escalating. All I could think about was “what is he going to do next?”

‘I couldn’t concentrate on anything. I just broke down crying. Genuinely, my life just drained out of me.’

Headmistress Cath Green, who took over as UCAN principal in 2014, said: ‘Mr Day said he would come back to the school every day until he had the opportunity to confront me with the evidence he felt he wanted me to see.

‘He had asked for a meeting and I had been advised by the police to tell him all information and concerns he had should go to the police.

‘I was concerned for the children and staff. I had a duty of care. I was anxious for myself because I had been mentioned. I was worried. I was quite saddened.

‘We had moved out of special measures and our results were the best in the school’s history. 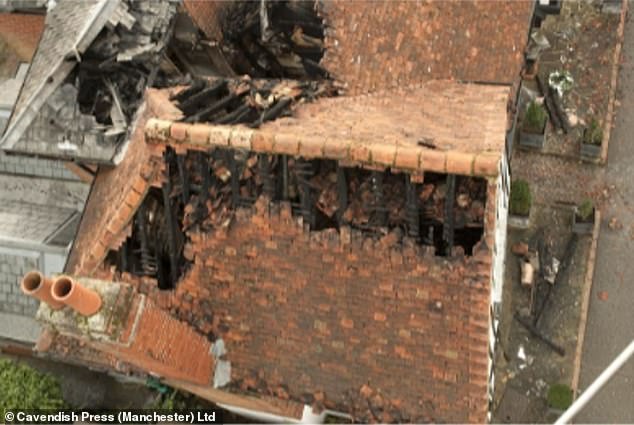 The 700-year-old home, which was worth £1.6million, was fortunately empty at the time

‘It was hard for everyone who worked really hard – we should have been celebrating but felt that we couldn’t.

‘Meetings became daily, with the police, my senior staff, the trust, student assemblies. The campaign was relentless.’

Mrs Green said she and the wrongly accused teacher both had to be escorted to safe rooms when Mr Day turned up at an open evening, prompting a ‘lockdown’.

She said she ‘broke down crying’, fearing she couldn’t keep the school community safe.

On February 22 last year Day was interviewed by police officers about his harassment of the teacher and Mrs Green but three days later he set the roof of the building alight in 17 different locations.

Tests showed he systematically removed roof tiles and pierced the felt before pouring petrol inside and lighting it. 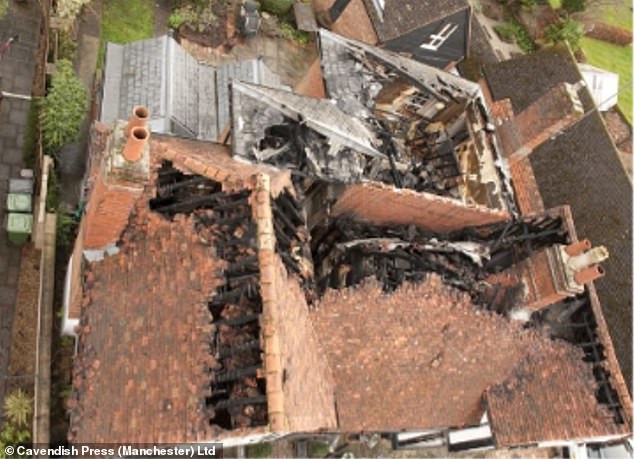 He was seen by locals calmly strolling around the school grounds carrying a jerrycan as the roof was on fire.

They noted down his number plate on his Volvo car as he drove away.

Prosecutor Mark Connor said: ‘Philip Day was a driven individual, quoting from the Bible and using God as justification for his actions.

‘However, his campaign was misdirected, his methods unjustifiable and the prosecution says unlawful.

‘His tactics were designed to intimidate, alarm and cause distress, and he was driven by a what he considered to be a divine but irrational belief that he was justified in his actions.

‘He claimed that the school was a ‘playground for paedophiles’ yet, despite a thorough and extensive investigation by both the school and the police, no evidence was found to back this up.

‘His campaign attracted support from some, but certainly not all, and anyone who disagreed with his approach was intimidated and shut down.

‘The effect of his allegations on the people he accused was devastating.

‘His claims of corruption and a large scale conspiracy between the police, the school and local authority to protect paedophiles is complete fantasy.’

Det Con Paul Cundy, from Cheshire Police said outside court: ‘He decided to take the law into his own hands, causing millions of pounds worth of damage to a local school with no regard for the consequences.

‘His actions over an eight-year period were despicable,’ he added.