For more than half her long life, Sister Wendy Beckett lived in a small, chilly caravan in a copse in the grounds of Quidenham, an enclosed Carmelite monastery in Norfolk.

Her daily routine was one of contemplation, solitude and total silence. She rose at 1am — the optimum time, she insisted, for prayer — worked for a couple of hours, perhaps translating medieval manuscripts, took in Morning Office and Mass, wrote spiritual meditations on contemporary art and prayed for seven hours before turning in at 6pm, sharp.

She had no telephone, no TV or radio and her only human contact was the arrival of a nun from the convent bringing a basket containing a flask of coffee, salad, biscuits, soft cheese and, perhaps, some Baileys, which Sister Wendy liked to swig straight from the bottle.

For more than half her long life, Sister Wendy Beckett lived in a small, chilly caravan in a copse in the grounds of Quidenham, an enclosed Carmelite monastery in Norfolk 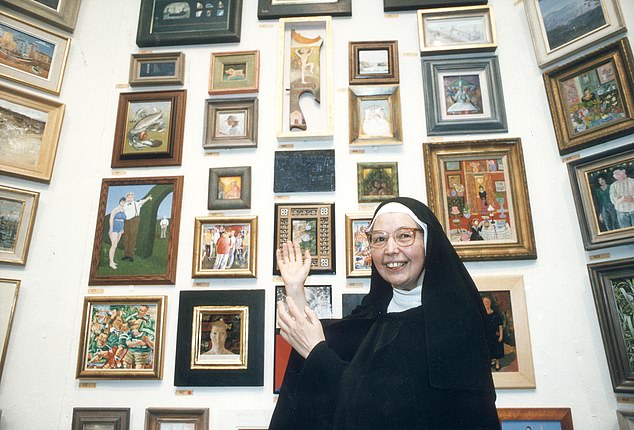 Sister Wendy, pictured, was relatively unknown until she met Delia Smith, who is a connoisseur of fine religious writing and pointed her towards a broadcasting career

‘I’m not an adventurous person,’ she once said. ‘I am a dull, sit-at-home kind of person which my life is beautifully adapted towards. I prefer not to talk. I don’t speak all day apart for a few words to the sister who does the post.’

And that’s how Sister Wendy, who has died aged 88, lived for several decades. Until her passion for art and a chance friendship with Delia Smith — who as well as a cook and fervent Norwich FC fan, is a connoisseur of fine religious writing — led to the publication of some of her works, a move into TV and the launch of a very different Sister Wendy.

Her world-famous alter ego was a cult figure with a high voice, huge glasses and very large teeth who presented series such as Sister Wendy’s Odyssey (1992), Sister Wendy’s Grand Tour (1994) and Sister Wendy’s Story of Painting (1996) which often drew a 25 per cent share of the British viewing audience and saw her hailed by critics as the best talking head on art since Kenneth Clark.

Because as well as being exceptionally clever and perceptive, she was a natural broadcaster — needing neither script nor autocue, she became known as ‘One-Take-Wendy’ — and made art fun, inspirational and, for a nun who has sworn a vow of chastity, surprisingly accessible.

Take her comments on Botticelli’s Venus: ‘You can’t imagine her doing the washing up.’

Or her assessment of Stanley Spencer’s Self-portrait With Patricia Preece. ‘I love all those glistening strands of his hair, and her pubic hair is so soft and fluffy’. 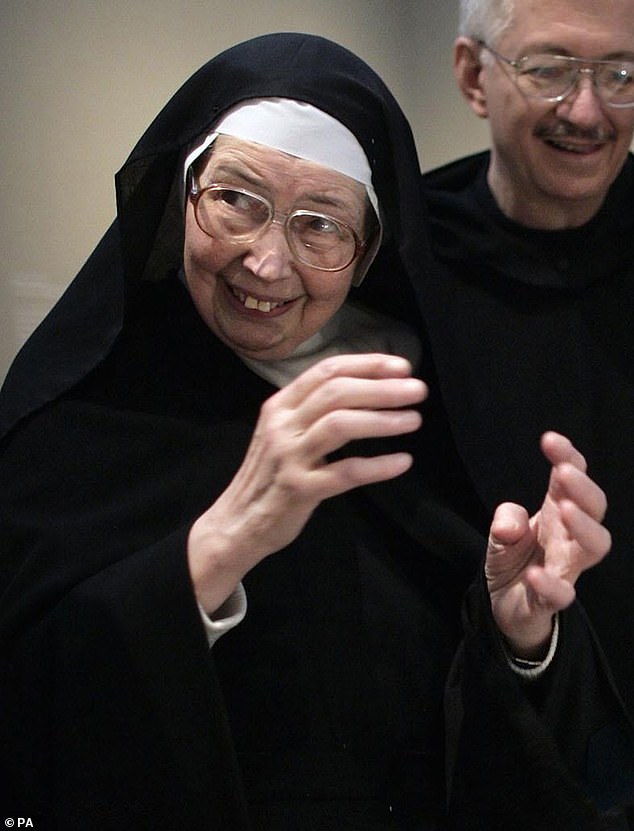 Wendy Beckett was born in Johannesburg on February 25, 1930, the daughter of Aubrey Beckett, a banker-turned-doctor and his wife Dorothy

Not, perhaps, something you’d expect most Carmelite nuns to say, but Sister Wendy just beamed beatifically with her gentle toothy grin — she once said her teeth were so big, she couldn’t actually close her mouth — and we all loved her.

Even more so, when veteran feminist Germaine Greer rubbished the idea of a nun discussing sexuality in art and Beckett replied, quick as a flash, that it wasn’t necessary to experience things to understand them.

‘Look at Jane Austen,’ she replied. ‘She was a virgin!’

Wendy Beckett was born in Johannesburg on February 25, 1930, the daughter of Aubrey Beckett, a banker-turned-doctor and his wife Dorothy.

The 12th-century saint and martyr, Thomas a Becket, was an ancestor and Samuel Beckett the playwright and author a distant cousin. She spent her early childhood in South Africa, before the family moved to Edinburgh to further Aubrey’s medical training.

Wendy was a solitary, sickly child with a weak heart, a plain face — ‘I was an extremely unattractive child’ she said — and a name created for the character in Peter Pan that she hated because it sounded too ‘trivial’. She was anything but.

Wendy was reading the Scotsman newspaper cover to cover from the age of four; she loved school and, later, sang the lead role in all the end of term operettas. 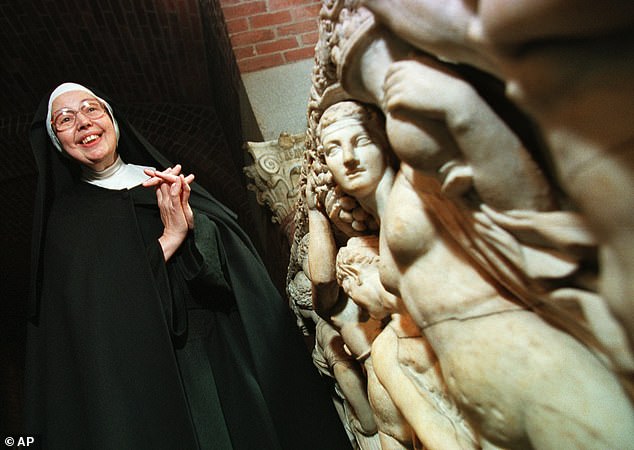 Her connection with God started when she was barely three and eating her Sunday sausages to the strains of a military band in the Meadows area of Edinburgh.

‘I realised then that God was there and life was going to be wonderful,’ she said.

Her parents were not overtly religious, but the nuns at school inspired her. ‘It was clear to me that this was what people did who wanted to belong completely to God,’ she said.

Her faith never wavered and, aged 16, and with her parents blessing (‘It’s just as well you look good in black,’ said her mum ), joined the Sisters of Notre Dame in East Sussex. She took the name Sister Michael and didn’t see her family again for three years.

‘After six months, I was given the habit — oh glorious day!’ she said.

After four years, she was sent to read English at St Anne’s College, Oxford, where — perhaps aided by the fact she studied in a nuns’ hostel with a vow of silence that forbade her to talk to her fellow students — she came top of her year, won a congratulatory first and was wooed unsuccessfully by J.R.R. Tolkien, the author and Oxford don, who wanted her to pursue a career in academia.

But nothing could divert her from her chosen course.

So she returned to her Sisters where she hoped to lead a solitary life of contemplation, but was asked to teach, first in Liverpool and later in South Africa.

This was her first big test. Because while she adored being a nun and had no problem with the vow of chastity (she never wanted to marry or have children), teaching did not suit her. She found it stressful and oppressive: ‘I was doing something I didn’t like, but I was happy because I was doing what God wanted,’ she said.

It was only in 1970, when she started suffering stress-induced epileptic fits that she was allowed to return to England as a Reverend Mother to live a contemplative life of prayer in the teeny second-hand caravan she bought for £50 and parked in the grounds of the Carmelite monastery.

There, on top of her meditation and hours of prayers, she started translating Medieval Latin to make a contribution towards the monastery’s overheads.

She completed five full volumes before suffering a heart attack. When she recovered she was given permission to write spiritual meditations on contemporary art — her great passion.

Some were circulated among a small circle of acquaintances and came to the attention of Delia Smith, a Catholic who became a great friend. Delia took her to art galleries and was so impressed by Wendy’s writing that, in the late Eighties, persuaded the Catholic Herald to publish them.

It was during a gallery visit that Wendy was overheard discussing art by a film crew who asked to record her and showed their video to a BBC producer. That was the beginning and Sister Wendy’s Odyssey was an instant hit.

She was refreshing and unafraid to speak her mind, whether about Leonardo’s ‘preference for boys’, or denouncing modern British artist Damien Hirst as ‘really pathetic’ and his Turner Prize-winning dead sheep and sharks, as ‘not worth a second look’.

However tight the filming schedule, she always had the entitlement to attend Morning Mass built into her BBC contract, but juggling her two lives must have been tricky.

Not least, because she embraced a surprising amount of non-sacred behaviour in her showbusiness life that could not have been more removed from a pious hermit.

Such as smoked salmon sandwiches at the Ritz, hearty meals at the Savoy Grill and wine in lieu of water whenever she was flagging.

She also adored horse racing (studying the form in the Racing Post but never placing a bet) and became a passionate Star Trek fan after coming across it on a hotel bedroom television, loving its ‘serious moral message’.

She certainly seemed to love the attention — both on and off the screen — and everywhere she went was accosted by fans who insisted she’d changed their lives.

But she yearned for her caravan solitude. ‘I never wanted to do it in the first place. If I’d known how much time it would take, I would never have started it,’ she once said of her media career.

She always insisted her fellow nuns felt sorry for her, having to trail around the world with a camera crew. Certainly her Sisters might have blanched at some of her comments.

Particularly when it came to gay marriage — she would often question the Catholic Church’s code on sexual ethics as a distraction from the important issues of inclusivity and Godliness.

But nothing fazed her. Not fame, not unkind comments about her teeth, nor modern society’s obsessions with sex.

Sexual organs, she insisted, were ‘just part of the apparatus God made for us’ and nothing to get embarrassed about.

She carried on broadcasting until 2001 — her last series was made for U.S. viewers — but then retreated full time to the calm of her caravan, before it fell to bits and she moved into the monastery.

She was not remotely afraid of death. ‘I don’t want to slip across,’ she said. ‘I want to be conscious. I want to say: “This is death and I give it to you, God.” ’