The trial lasted seven months and was the most shocking of the century — perhaps of any century.

An Italian painter with close links to Pope Innocent X stood accused of raping a 17-year-old virgin after grooming her for months and promising to marry her as long as she remained silent.

This was 1612 in Rome. The girl was Artemisia Gentileschi, who went on to become the greatest female artist of the baroque age, blazing a trail for future woman artists and even being invited by Charles I to paint for him in London.

Born in 1593, she was the daughter of Orazio Gentileschi, a figurative artist and close friend of, among others, Caravaggio.

Susanna And The Elders was Artemisia Gentileschi’s first signed painting, dated 1610. She was 17 and it was the year before she was raped by Agostino Tassi

The accused, more than twice her age, was Agostino Tassi, a landscape artist of little lasting legacy, serial liar, pervert and social climber who had raped his sister-in-law and was suspected of murdering his missing wife.

The case, which was heard by the Pope’s own court, the Curia, was brought by Orazio, who claimed that Tassi had ‘deflowered’ his only daughter and he wanted the full sordid details of her rape to reverberate around the Vatican and into high society.

Chilling portrait of crime to come

Susanna and the Elders

This is Artemisia’s first signed painting, dated 1610, when she was 17, the year before she was raped by Agostino Tassi.

Two seedy men, who appear threatening and lascivious, lurk behind her as she recoils from them, raising her arm to preserve her modesty. It depicts the biblical story from the Book of Daniel in which two elders from Susanna’s community secretly observe her taking a bath.

But it speaks equally of her own predicament in being harassed by Tassi, aided and abetted by an older, sinister character called Cosimo Quorli, who worked for the Pope. It is assumed that the naked body is her own, reflected in a mirror.

Other artists have also painted this scene, in which Susanna is presented as either unaware of the elders’ presence or even welcoming them in a flirtatious fashion. But Gentileschi shows Susanna visibly distressed at being watched by the men.

The subject matter may reflect the sexual harassment she suffered from Tassi and possibly Catholic elders while she was a teenager.

But he might have had second thoughts if he had known at the time that part of the trial would involve his daughter being tortured ‘to remove all infamy or doubt about her person or words’, as the judge put it — to which Artemisia replied: ‘My lord, I am ready to confirm my statement under torture and whatever must be done.’

In 1611, Orazio and Tassi had been working together on frescoes for the papal summer palace. Tassi was not, as has sometimes been claimed, Artemisia’s tutor but became a frequent visitor to the Gentileschi home, often arriving on the pretext of picking up art supplies, sometimes turning up when the teenager was still in bed.

One afternoon, Tassi entered the house through a door left open by workmen and, Artemisia recounted, ‘having found me painting, said to me: “Don’t paint so much, don’t paint so much”.’ Tassi grabbed the girl’s brushes and palette and hurled them across the room, then bundled her into her bedroom and locked the door.

‘He threw me on to the edge of the bed, pushing me with a hand on my breast, and he put a knee between my thighs to prevent me from closing them. Lifting my clothes, he placed a hand with a handkerchief on my mouth to keep me from screaming.’

We know this from Artemisia’s 400-page testimony, held in the State Archives in Rome but which, for the first time, will be on public display as part of the National Gallery’s block-buster exhibition of Artemisia’s work, which opens on Saturday. And to coincide with the exhibition, a biography of Artemisia by the art historian Jonathan Jones has been published.

‘I scratched his face and pulled his hair and, before he penetrated me again, I grasped his penis so tight that I even removed a piece of flesh,’ she said.

At which point, the judge asked if she had bled. 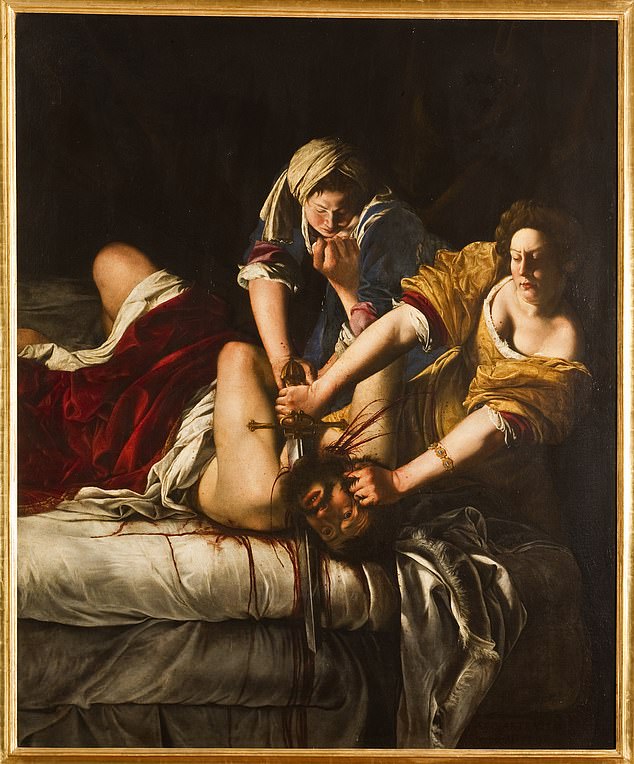 Judith Beheading Holofernes was painted after the rape and before Tassi’s trial, the violence serving as some sort of revenge for the day when Tassi pinned her down and stole her virginity

‘At the time the said Agostino attacked me, I was having my period and therefore I am not able to say certainly to your lordship whether my vagina bled because of what Agostino did, because I did not know much about how these things happen; but it is true that it seemed to me that the blood was redder than usual.’

Artemisia said she took a knife from a drawer and threatened Tassi with it. ‘I want to kill you because you have shamed me,’ she shouted.

Artesmisia would have been familiar with Caravaggio’s painting of the same Old Testament scene. But hers, which normally hangs in Florence’s Uffizi gallery, is even more graphic. It takes the two women all their strength to pin down the man as Judith busies herself in severing Holofernes’s head, blood dripping down the sheets and spattering her dress. She painted this after the rape and before Tassi’s trial, the violence serving as some sort of revenge for the day when Tassi pinned her down and stole her virginity.

‘Here I am,’ Tassi replied, opening his coat. Artemisia threw the knife but missed her target.

Part of the trial included an excruciating physical examination, conducted by two midwives, to establish if her hymen had been broken, indicating that she was no longer a virgin.

Tassi paid a number of witnesses to speak favourably of him and sought to portray Artemisia as a ‘whore’ who was unstable and untrustworthy. He even went so far as to claim that Orazio had encouraged him to take an interest in his daughter’s welfare because he was so anxious about her character.

‘The said Orazio opened up about his feelings and told me that when he said his daughter was living a bad life, he meant she was a whore and that he didn’t know what to do about it,’ he told the court.

During the trial, Tassi was kept in prison — and on May 14, 1612, Artemisia was taken to his cell. She was asked to repeat her claim of rape to his face, which she did. He denied it.

One of the judges then asked if she would ‘ratify’ her story ‘even if tortured’. The aim of this extraordinarily cruel legal procedure was ‘to release the truth from a suffering body and so bypass the mind’s cunning. It was the instrument of mental terror as well as physical pain,’ says Jones.

The specific torture was known as the ‘sibille’. Cords were wrapped around Artemisia’s fingers and pulled tighter and tighter together, eventually crushing them. ‘I have told the truth and always will because it is true, and I will do what is needed to confirm it,’ she cried out. With Tassi watching, the cords were tightened further.

‘It is not true. You are lying in your throat,’ said Tassi. 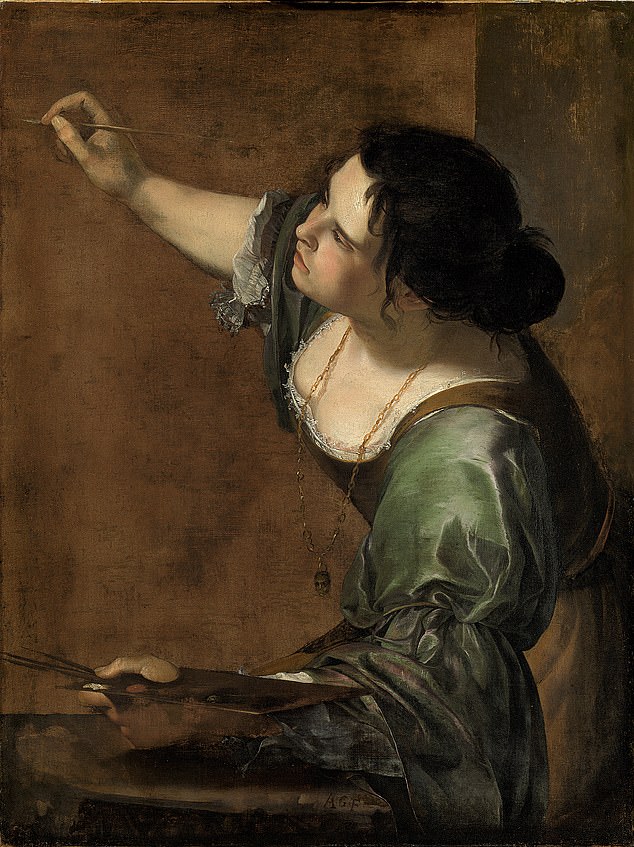 The trial dragged on until November 27, when Tassi was found guilty of rape of a virgin and the suborning of witnesses. But it was not long before his conviction was overturned on the instructions of the Pope.

Self-Portrait as the Allegory of Painting

At the invitation of Charles I, Artemisia came to London in 1638 and painted this self-portrait for him, which still belongs in the Royal Collection.

It is her final masterpiece, showing that a woman can be a painter — and it reflects how Artemisia wanted to be seen by the world: strong, determined.

Her muscular arm stretches across the canvas, her hands are dirty and she holds the palette firmly. Only in the act of painting could she be truly free. ‘She is lost in the ecstasy of her art,’ says her biographer Jonathan Jones. ‘She has become painting.’

Artemisia would have been regarded as ‘damaged goods’, but she still had one weapon — her paintbrush, which she wielded with such skill and devastating honesty that she achieved iconic status as the first woman to gain membership of the Florentine Academy.

The visceral power of her paintings made her one of the most famous artists in Europe, and in 1638 she was invited to London by Charles I, where she painted her Self-Portrait as the Allegory of Painting, which remains in the Royal Collection and hangs in Hampton Court — although it has been leant for the exhibition.

For the first time ever, two versions of her greatest and most poignant paintings will also be on show, side by side. These are Judith Beheading Holofernes, dating from around the same year as her trial and which, by some accounts, she made Tassi see.

It is a gruesome piece of work, in which the wronged Artemisia spares us nothing. The dying man is Holofernes, an enemy of the Israelites in the Old Testament — but it might just as well be Tassi. And Judith, wielding a sword in her right hand and holding his beard in the other while hacking at his throat, is surely Artemisia.

Blood streams down the white bedsheets as he writhes towards a certain death, the red blanket over his private parts a reminder, perhaps, of Artemisia’s humiliating interrogation in court.

‘She painted it in the immediate aftermath of her rape and it clearly is a self-portrait,’ says Jones. ‘It has the feeling of an untamed scream.’

Artemisia, who could not read or write, had five children, of whom only one daughter survived. She had married Pierantonio Stiattesi, a minor artist, shortly after the trial but later fell in love with a wealthy Florentine nobleman called Francesco Maria Maringhi, a relationship from which passionate letters still exist, with some on display at the exhibition.

On moving from Rome to Florence, then Venice and Naples — where she died in about 1656 — Artemisia educated herself and became friends with great thinkers and artists including Galileo and the son of Michelangelo.

Although she was employed by two of Europe’s great courts — those of the Medicis in Florence and of Charles I in London — her greatest achievement, according to Jones, was ‘to release her pain and anger in paintings that reveal her inmost feelings’.