The widow of Arthur Sackler has hit back at protests against her late husband blaming him and his family for fueling the opioid crisis.

In a strongly worded op ed Jillian Sackler insists neither ‘Arthur nor his heirs had anything to do with the manufacture or marketing of OxyContin’ after public pressure on the family, one of the nation’s wealthiest, mounted in recent months.

Writing for The Washington Post she adds: ‘Arthur died of a heart attack nearly 32 years ago at age 73, nearly a decade before OxyContin came to market.’

Jillian, the president and chief executive of the Dame Jillian and Dr. Arthur M. Sackler Foundation for the Arts, Sciences and Humanities, pleaded with those protesting against the family, writing: ‘Vilifying an innocent man is wrong’.

The dynasty are coming under increasing scrutiny in the midst of a deadly opioid overdose crisis that has claimed the lives of tens of thousands of Americans in recent years.

Arthur’s widow Jillian and his daughter Elizabeth have long sought to distance themselves from the other side of the family now being sued.

She has now said ‘suggestions that his philanthropy is now somehow tainted are simply false’, adding: ‘My late husband, Arthur Sackler, who died in 1987, has been found guilty by association — along with the rest of what is referred to by the blanket designation “the Sackler family” — because of some family members’ association with Purdue Pharma, the maker of OxyContin.’ 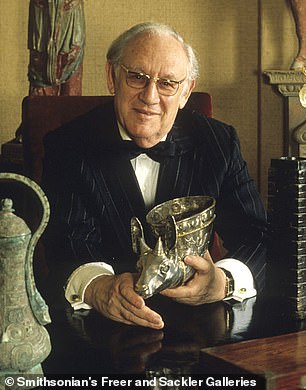 Jillian argues that Purdue Pharma in its current form was actually set up by her husband’s younger brothers, Mortimer and Raymond, ‘four years after his death’.

She writes: ‘None of the 1,600-plus lawsuits filed against Purdue Pharma, members of the Sackler family or others in the opioid business names Arthur or his heirs as defendants.

‘It is incredible to me that last year, the Smithsonian’s Arthur M. Sackler Gallery of Art was the target of demonstrators protesting the opioid crisis.

‘Fair-minded people who see the terrible consequences of the opioid crisis understandably seek justice and restitution.

‘But make no mistake: Vilifying an innocent man is wrong. It does nothing to help the United States come to grips with the epidemic, nothing to advance solutions.’

Opioids, including illicit drugs such as heroin and fentanyl, were involved in a record 48,000 deaths in 2017, according to the U.S. Centers for Disease Control and Prevention.

The Sacklers, a pharmaceutical dynasty, are accused of pushing the highly addictive painkiller through the pharmaceutical industry and in to millions of American homes and hospitals to make them one of America’s richest families.

Their life is so charmed that Forbes named the Sacklers as number 19 on its list of America’s richest families in 2016 — four spots above the Rockefellers. 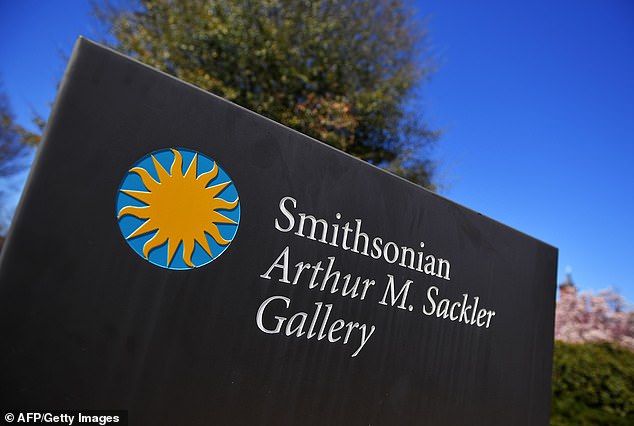 Large museums are rejecting funds from the Sackler family, underscoring the growing unease with the main source of the philanthropic dynasty’s riches: the painkiller at the center of the US opioid crisis. The Arthur M. Sackler Gallery in Washington, DC 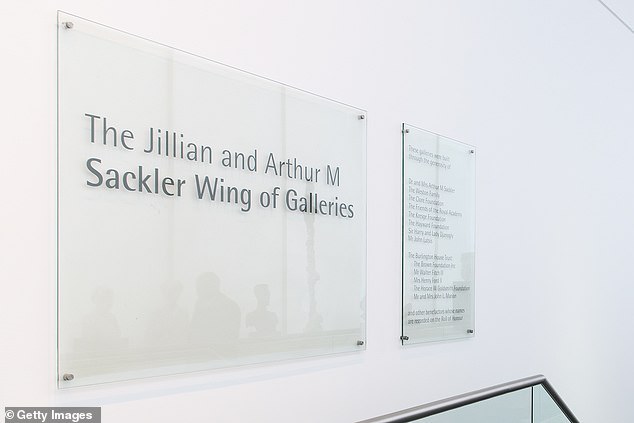 Britain’s Tate museums and New York’s Guggenheim Museum, where the family has been major donors, announced they would stop taking gifts from the family. The Jillian and Arthur M Sackler wing of galleries in the Royal Academy of Arts in London 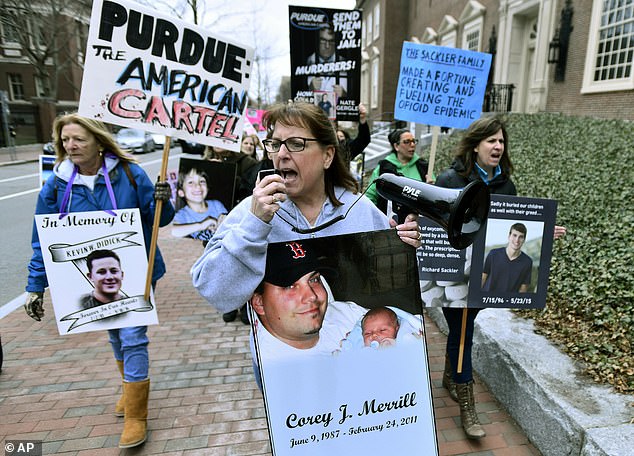 Cheryl Juaire, center, of Marlborough, Mass., center, leads protesters near the Arthur M. Sackler Museum at Harvard University Friday. Juaire, whose son Corey Merrill died of an opioid overdose in 2011, led the demonstration by parents who have lost a child to opioid overdose, campaigning for the removal of the Sackler family name from the building at Harvard 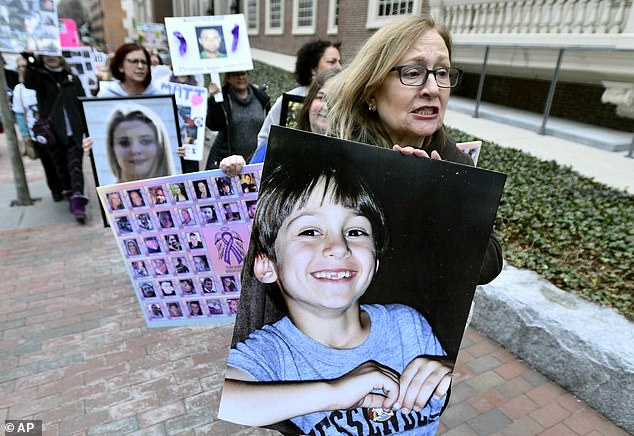 Barbara Cowley, of Boston, carries a photo of her son Justin Cowley-Kerner, who was 30 when he died of an opiate overdose during the protest Friday

The Sackler family owns Purdue Pharma, the privately held drug company that has made billions from OxyContin, and Sacklers hold most of the seats on the board.

Members of the family have been accused in a case brought by the state of Massachusetts of deceiving patients and doctors about the drug’s risks as deaths mounted.

After a federal investigation, Purdue Pharma and three executives – none of them Sacklers – pleaded guilty in 2007 and agreed to pay more than $600 million for misleading the public about the risks of OxyContin. 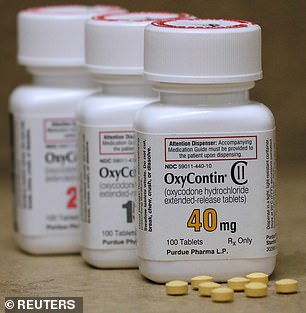 The Stamford, Connecticut, company has also been hit with a multitude of lawsuits over its role in the opioid crisis that killed more than 47,000 people in 2017 alone.

And parents whose children fatally overdosed on opioids are demanding Harvard University remove their name from a building that housed one of its art museums.

About two dozen parents protested Friday outside the building that was home to the Arthur M. Sackler Museum — many of them carrying poster-sized photos of their children.

Britain’s Tate museums and New York’s Guggenheim Museum, where the family has been major donors, announced they would stop taking gifts from the family.

And Tufts University, which has a graduate school of biomedical sciences named for the family, said it was evaluating the relationship.

A lawsuit filed by Massachusetts Attorney General Maura Healey accuses Connecticut-based Purdue Pharma and the Sackler family of hiding the risks of opioids from doctors and patients. The Sackler family owns the drug company.

The family has responded by saying that the lawsuit is riddled with inaccurate and misleading statements and that Healey cherry picked from hundreds of internal documents to wrongly vilify the family for the public health crisis.

The Sacklers have also tried to distance themselves from the workings of the company it owns, saying family members were being informed of Purdue Pharma’s issues rather than controlling every detail of operations.