The sweeteners are used in diet drinks (file picture), breakfast cereals and other foods

Scientists found consuming high quantities of the sweeteners – which are used in diet drinks, breakfast cereals and other foods – changes the way the body responds to sugar.

Having high spikes and low troughs in blood glucose levels – the main feature of diabetes – can be extremely dangerous.

In a healthy person the human body naturally slows down the rate at which sugar is absorbed into the blood after a meal.

But experts found that people who consumed lots of artificial sweeteners for two weeks – the equivalent to drinking five cans of diet drink a day – showed a significantly reduced ability to control glucose absorption.

Over time, this could lead to the development of type two diabetes, they warned.

The Australian research team, led by Professor Richard Young of the University of Adelaide, tracked 27 healthy volunteers who were given one of two different sweeteners – sucralose or acesulfame-K – or a dummy ‘placebo’. 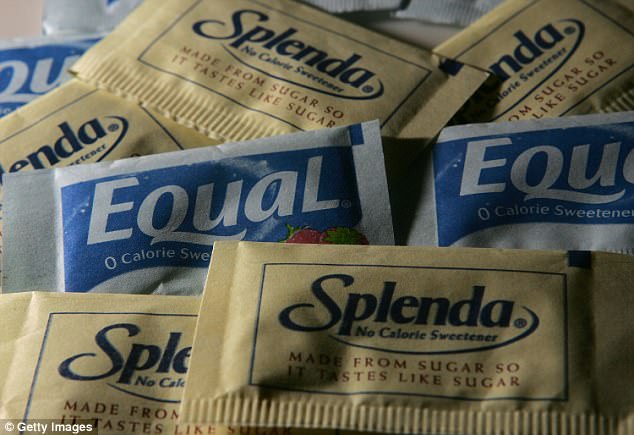 These were consumed in the form of capsules taken three times a day before meals over the two-week study period, in the same daily levels as would be found in 1.5 litres of diet drink.

At the end of the two weeks, subjects underwent tests of their glucose response, blood sugar levels, and levels of insulin and gut peptides.

How tea and coffee ‘help women with diabetes live longer’

Women with diabetes who drink a cup of tea or coffee a day can expect to live a longer life, research suggests.

Experts found that regular caffeine consumption was linked to women living longer compared to those who drank no caffeine at all.

The research, presented at the European Association for the Study of Diabetes annual meeting in Lisbon, found no such association between caffeine and men with diabetes.

Experts from the University of Porto looked at caffeine and death rates in more than 3,000 men and women with diabetes.

The people in the study reported their caffeine intake from coffee, tea, and soft drinks over 24 hours at the point they enrolled in the research.

They were the tracked for the following 11 years.

The researchers found that women who consumed the equivalent of one cup coffee a day were 51 per cent less likely to die during the 11 years, increasing to 57 per cent for those two cups, and 66 per cent for more.

Analysis showed that coffee-drinking was linked to a lower risk of death from any cause, particularly cardiovascular disease, while women who consumed more caffeine from tea appeared to be less likely to die from cancer.

The authors said: ‘Our study showed a dose-dependent protective effect of caffeine consumption on all-cause mortality among women.

‘However, our observational study cannot prove that caffeine reduces the risk of death but only suggests the possibility of such a protective effect.’

The researchers did not look at exactly why caffeine had such an impact, but previous studies have suggested the the other antioxidant plant compounds in tea and coffee – rather than the caffeine itself- is probably responsible for the benefits.

Coffee contains a number of compounds which interact with the body, including diterpenes and antioxidants, and scientists believe some of these have a protective impact.

Other studies have found similar benefits among those drinking decaffeinated versions – leading scientists to conclude that the antioxidant plant compounds may provide the most benefit.

Emily Burns, head of research communications at Diabetes UK, said: ‘More research is needed to establish if there is a link between caffeine and a reduced risk of death for women with Type 1 or Type 2 diabetes, and to investigate why. For now, we don’t know if caffeine is directly responsible.

‘The best way to manage diabetes is by taking medication as prescribed, following a healthy balanced diet and exercising regularly.’

The team, who presented their research at the European Association for the Study of Diabetes annual meeting in Lisbon, found volunteers who had taken the sweeteners saw a markedly increased response to glucose.

Their glucose absorption and blood sugar levels were higher, while their gut peptidesm, which acts to limit the rise in blood glucose after meals, was reduced.

None of these measures were altered in those subjects who were given a placebo.

The authors concluded that just two weeks of taking high levels of sweeteners was enough to change the way the body reacts to sugar, a major risk factor for the development of type two diabetes.

They said: ‘This study supports the concept that artificial sweeteners could reduce the body’s control of blood sugar levels and highlights the potential for exaggerated post-meal glucose levels in high habitual non-caloric artificial sweeteners users, which could predispose them to developing type two diabetes.’

More than 3.5million people in the UK are thought to have type two diabetes, and the rates have soared by 60 per cent in a decade, largely due to obesity.

Dr Ines Cebola of Imperial College London said: ‘This study addresses a very important global human health issue, as artificial sweeteners are food additives commonly used not only by patients with diabetes, but also by healthy individuals aiming to manage their sugar intake.

‘Although generally thought as safe and even beneficial, artificial sweetener consumption has actually been previously associated with weight gain and development of glucose intolerance, which can lead to development of type 2 diabetes.

‘Even though the study is limited in power by the reduced number of individuals, it is quite striking to observe marked differences in glucose response in individuals taking the artificial sweetener supplementation for only two weeks.

It would be interesting to further investigate the underlying mechanisms of these observations.’

But other British experts said the results were not definitive, and said artificial sweeteners are probably better than sugar.

Emma Elvin, clinical advisor at Diabetes UK, said: ‘This is a small study with interesting results, but it doesn’t provide strong evidence that artificial sweeteners increase the risk of type two diabetes.

‘We need to see the results of larger trials testing in settings more true to real life before we’ll know more.

‘Consuming lots of sugary foods and drinks is very damaging to overall health and can increase risk of type two diabetes.

‘We would advise people to reduce their intakes of sugar, and artificial sweeteners could be an option to help some people achieve this.’

Professor Victor Zammit of the University of Warwick, said: ‘Although an exaggerated response to glucose intake after a meal could mimic the harmful effects of poor glucose control in diabetes, it is not possible, from the data presented, to interpret this as necessarily indicating that such increased responses will result in the development of type-2 diabetes itself, until we know the extent of the damage that such increased, sweetener-induced glucose excursions actually cause.’