A man has found himself hooked on bursting balloons with sharp utensils- and has even created a ‘knife mask’ to help.

Jan Hakon Erichsen, 41, calls himself a ‘visual artist and balloon destroyer’ and has made quite the investment – running an Instagram dedicated to all kinds of DIY tools for squashing the inflatables.

He admitted that he does not really do anything else now – with balloons taking up most of his time, according to Intelligencer. And his Twitter reveals he is ‘here to destroy everything’.

Wheels of destruction: Jan Hakon Erichsen, 41, lets loose on a set of balloons by spinning his homemade wooden windmills which are attached to small knives. He is dedicated to finding ‘new ways to use objects from our everyday lives in a new kind of absurd light’ 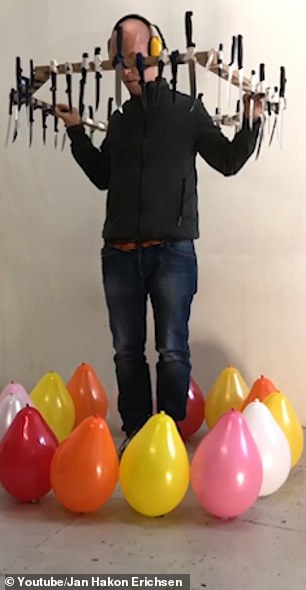 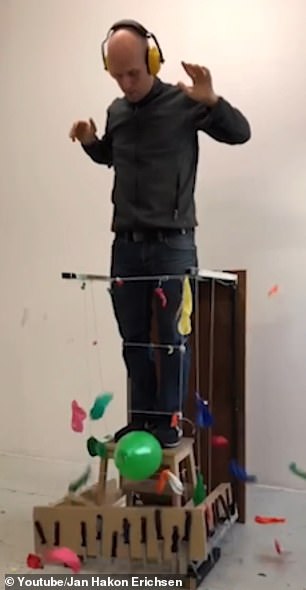 Rewarding: These two pictures show the satisfying moment before and after the Oslo-based artist releases his makeshift equipment onto the party inflatables below 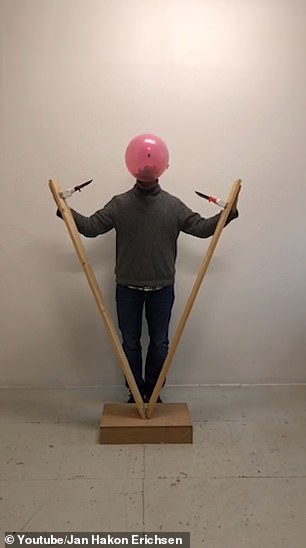 In the firing line: He wears a pink balloon over his face before popping the balloon with two knives. He says his knife collection is somewhere between 500 and 1,000

In the bizarre footage, he lowers himself to the ground with a makeshift wooden instrument lined with five knives before shattering balloons.

Mr Erichsen claims he is wanting to ‘find new ways to use objects from our everyday lives in a new kind of absurd light’ and tries to make two videos per day since he started one and a half years ago.

He claims that people see things so many times everyday that they do not ‘really see’ them anymore – and the objects need to be looked at in a different way.

The Oslo-based artist now has a 435k Instagram following, wears a set of ear protectors while he drops a cardboard instrument with more than 15 knives popping an array of the party decorations.

‘My focus is the destruction part of it and making the destruction devices. Before I started this project, a lot of the things I made were quite aggressive and turned people off.

‘The minute I started using balloons, something changed. People started liking it. It was kind of a breakthrough, that I need a comic aspect to it. So I started focusing more on the slapstick,’ he told the magazine. 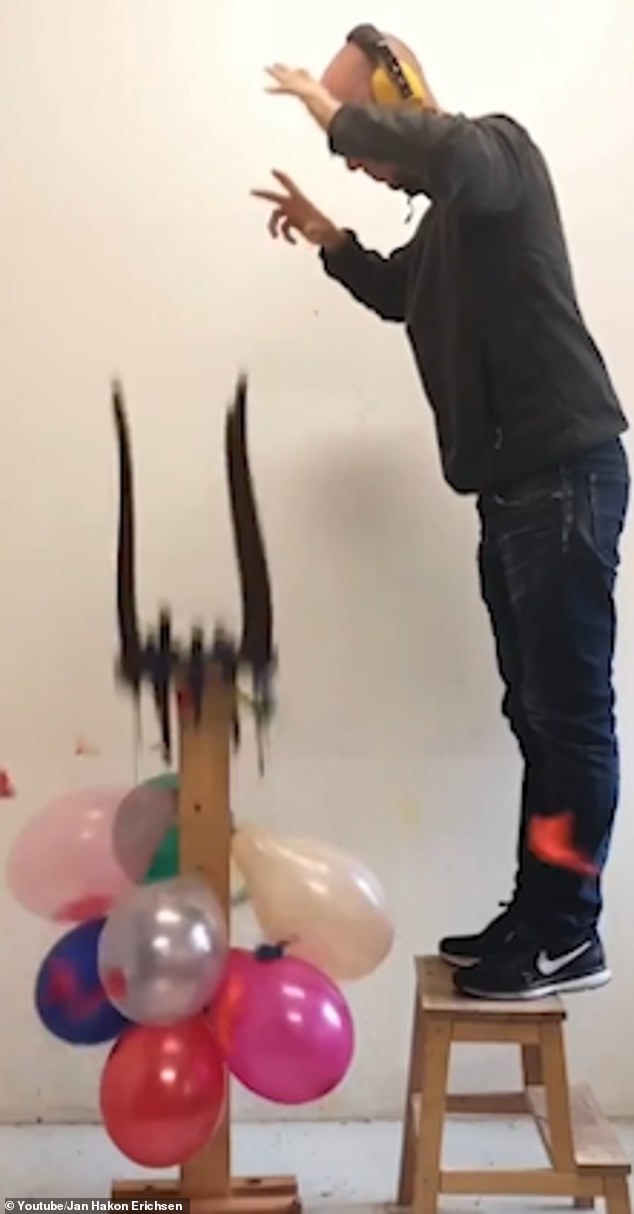 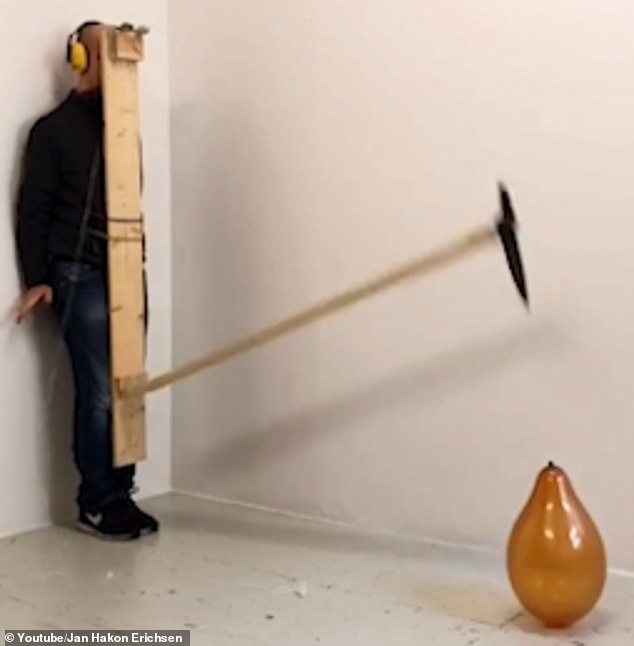 His knife collection is between 500 and 1,000 – and most are added to his creative contraptions.

In the video, he then launches a Viking-style gadget studded with knives on to a wooden beam with balloons attached.

He lunges forward wearing a shimmering hat of knives and then a wooden panel with a pointed hammer attached  – both shattering the perky balloons.

The visual artist goes so far as to step into a foil box and burst through the lid with a tray of upward-facing blades – popping a smiley-face balloon.

Other tricks include opening his shirt to reveal a bright yellow balloon which is struck immediately by a knife hoisted on a wooden beam.

People showed their amusement on social media, with Twitter user Jenna The Fox saying: ‘He went through a lot of risk to show his hatred for balloons.’

‘Why did I watch all of this,’ zachypoo replied to the video post. 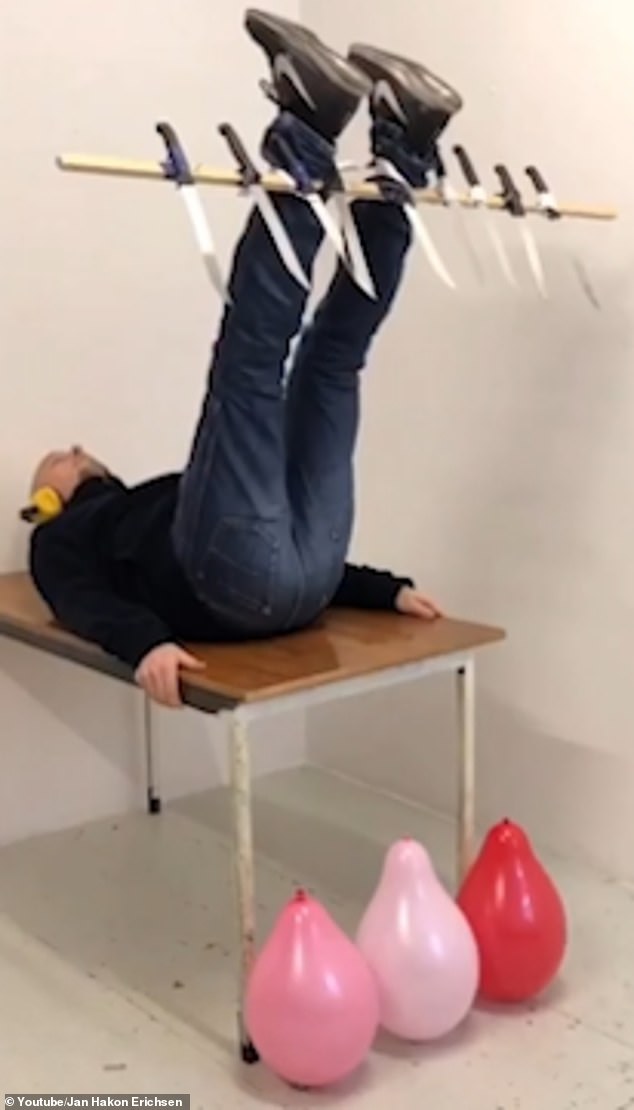 ‘It was kind of a breakthrough, that I need a comic aspect to it’: He told a magazine about how a lot of things he made were quite aggressive and using balloons added a slapstick element which helped gather more interest