By Eleanor Sharples and Alec Fullerton For The Daily Mail

The 65-year-old TV historian said that gallery visitors should reflect more on the origins of nude works of art and how the female body has been historically objectified for male pleasure.

‘I think western art has centred on a sexualised version of the female body more than other cultures,’ the Cambridge professor warned in a Radio Times interview.

Dame Mary said she still loves seeing masterpieces such as Botticelli’s The Birth of Venus or Titian’s Venus of Urbino, but noted most Renaissance nudes were commissioned by men for mens’ pleasure.

Venus of Urbino painted in 1538 by Titian currently at the Uffizi Gallery in Florence. Dame Mary Beard said she still loves seeing such masterpieces 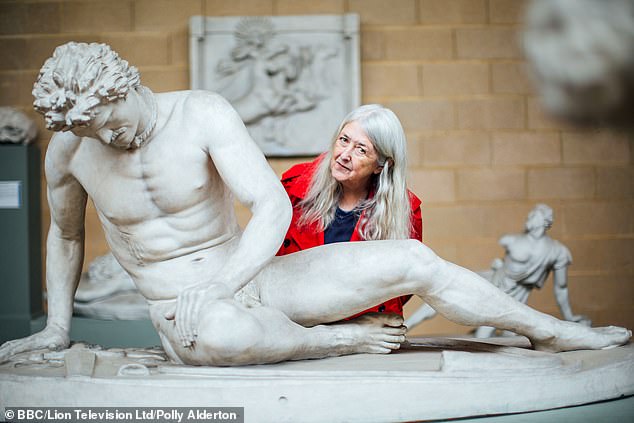 Mary Beard’s Shock of the Nude series on BBC2. She is pictured at the Museum of Classical Archaeology in Cambridge

She said: ‘Where does that leave the female viewer? On what terms can I enjoy looking at a naked woman whose image was drawn and painted, let’s imagine, for the pleasure of the male customer?’

Her comments come ahead of her two-part BBC2 series, Shock Of The Nude, in which she will look at ‘some of the most famous nudes in art’ and ‘argues controversy is nothing new’.

Dame Mary was careful to make clear she had no moralistic problem with nudity in art, adding: ‘I don’t have a stronger moral purpose here except to say, let’s look harder at what we look at.’

While filming the new series, which explores the ‘troubling power’ of the nude in western art, she posed naked for a life-drawing class.

‘I didn’t feel entirely morally ok about dissecting the power relations between naked female and clothed artist if I never put myself in a position of weakness. It’s not a bad idea to make yourself a bit vulnerable,’ she said.

The broadcaster, who was made a dame in 2018, also complained that woman on TV can’t win as they will be criticised however they look.

‘However women look on the telly, they’ll be gone for. Either as mutton dressed up as lamb or for having Botox. Or not brushing their hair,’ she said. 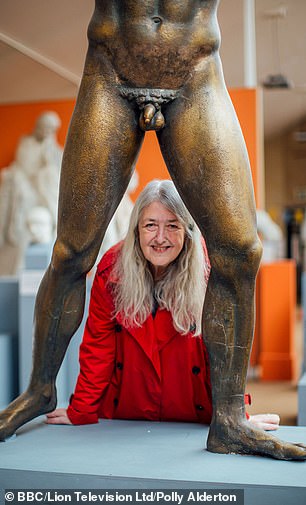 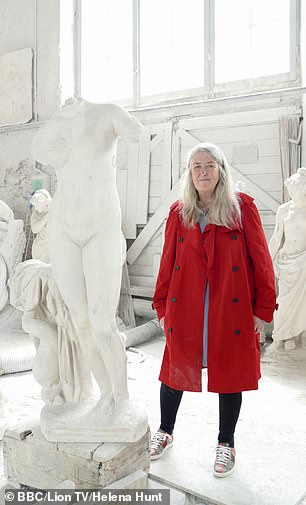 Mary Beard at the Museum of Classical Archaeology in Cambridge (left and right). The classicist explores the ‘troubling power’ of the nude in western art and she even posed naked for a life-drawing class 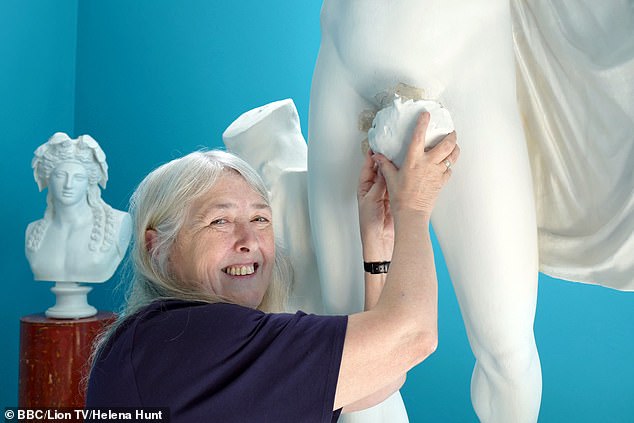 Mary Beard at Crawford Art Gallery, Cork. In her new BBC2 series she will look at ‘some of the most famous nudes in art’ and ‘argues controversy is nothing new’

Dame Mary said she got criticised for her looks when she first appeared on TV.

‘I came in as a woman in her mid-50s, who couldn’t plausibly pretend to be somebody else.

‘I mean, I got flak for it, but I thought that when I look back at myself on telly, I want to see me. I don’t want to see someone pretending to be someone they are not.’

The late TV critic A.A. Gill once suggested that she wasn’t attractive enough to be on the television, saying that she should be ‘kept away from the cameras altogether’.

Gill also suggested she applied for Channel 4 show The Undateables, which is about people with facial deformities and disabilities trying to find love.

Dame Mary, who has previously said she will never have a make-over, published a response to the review saying: ‘Men like Gill are frightened of smart women who speak their minds’.

She said that she looks ‘perfectly ordinary’ and ‘what it is very easy to look like if you are 65’, which she feels is ‘liberating.’

‘People who look as if they’ve taken immense care get flak. I get flak because I haven’t. That is the residual…I think calling it misogyny is putting it a bit hard, but it’s a residual sexism,’ she said.