As a film about the 2008 Mumbai hotel attack is released, survivors tell their devastating tales

Daniela Federici stayed strong until the fire closed in. Barricaded in the ballroom of the Taj Mahal Palace hotel in Mumbai, as terrorists bombarded the building with bullets and grenades, she kept positive until the smoke fumes finally became overpowering. Shaking uncontrollably, she realised her time was up.

‘I texted my ex-husband and son, who was three, saying, “I love you guys but I’m not going to make it.” Then we all held hands and lay down to die.’

On November 26, 2008 ten Jihadis pledging allegiance to Lashkar-e-Taiba, an Islamic terrorist group based in Pakistan, carried out a series of attacks across Mumbai. An estimated 166 people were killed, including 31 staff and guests at the Taj.

On November 26, 2008 ten Jihadis pledging allegiance to Lashkar-e-Taiba, an Islamic terrorist group based in Pakistan, carried out a series of attacks across Mumbai. An estimated 166 people were killed, including 31 staff and guests at the Taj. Australian director Anthony Maras has made a gripping film about the attack

Eleven years on, Australian director Anthony Maras has made a gripping film about the attack. Starring Dev Patel, Armie Hammer and Jason Isaacs, Hotel Mumbai is based on the recollections of those who survived the onslaught. They include Hemant Oberoi, the hotel’s head chef, and Federici, an Australian-Italian film-maker, who was visiting the Taj to make a documentary about art in Rajasthan.

When the attack began at around 10pm local time, Oberoi was working in his kitchen, while Federici had just arrived at the hotel. She and her cameraman were halfway up the lobby stairs when the gunmen entered. ‘We heard this phut-phut-phut outside,’ she says. ‘Two gunmen came in and opened fire on everyone standing around. I know the hotel, so we ran into the first floor bar and shouted, “Quick, close the doors!”’

The group barricaded the doors with furniture before moving into the next room, where a wedding was taking place. ‘They had no idea what was going on,’ says Federici. ‘We grabbed them and moved into the ballroom. We had about 65 people there. We tried to crack through the windows, but they were double-glazed and everything just bounced back. So we were stuck in there.’

In the restaurant, meanwhile, Oberoi’s deputy told him about the gunmen. He immediately turned off the lights, locked the doors, and led the guests through the kitchens to the private members Chambers club.

As they waited, they realised that the gunmen were roaming the hotel, seemingly unchallenged. ‘The city police force was not prepared, and our specialist units were in New Delhi,’ says Oberoi. ‘They had to fly to Mumbai, then come by bus from 90 minutes away. By the time they arrived most of the damage was done.’ 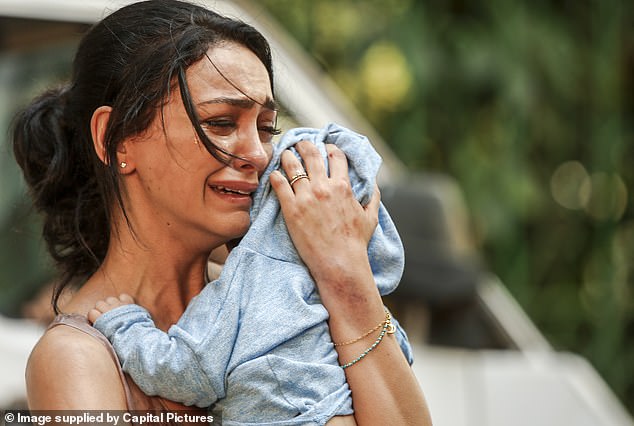 Nazanin Boniadi as hotel guest Zahra. The ringleaders of the original attack have never been brought to justice 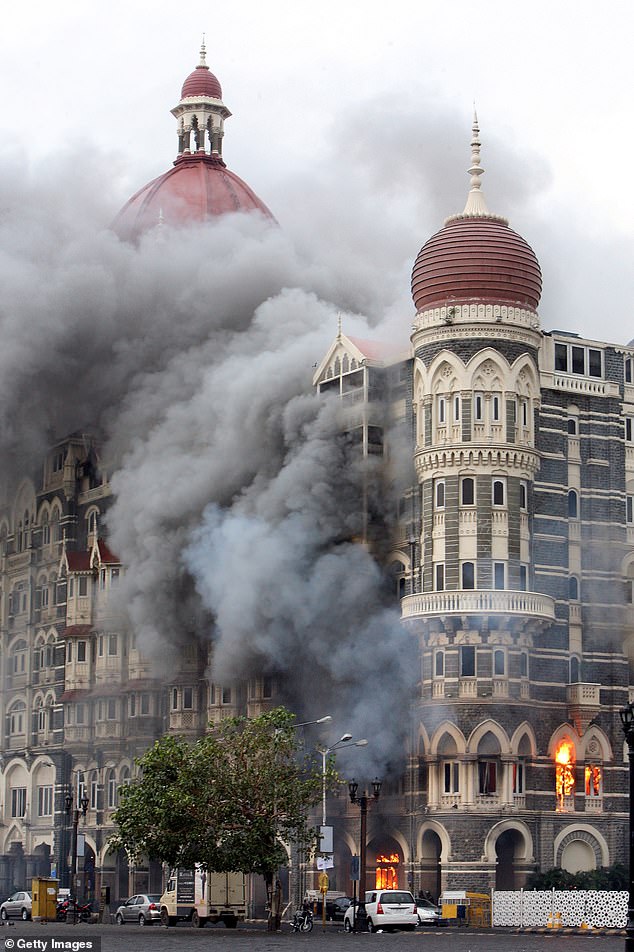 A real-life shot of the horrific attack as it unfolded in Mumbai in 2008. The city was rocked by multiple coordinated attacks

In their absence, Oberoi and his staff resolved to protect their guests. ‘I remember telling the staff, “Some of you, please leave” and everyone said, “No sir, we will leave together.” They were loyalists who would give their lives for the place, and some did.’

At around three in the morning, Oberoi began evacuating guests down a stairwell leading to an employee exit. Unfortunately, a media outlet learned of the plan and broadcast it on TV. The news was picked up by the terrorists’ handlers in Pakistan, who instructed the gunmen to go directly to the Chambers club.

‘About 100 people had already left and suddenly the gunmen opened up my dining room,’ says Oberoi. ‘My deputy said, “Chef, I think they’re coming down,” and straight away they shot him.’

By now, the terrorists were almost close enough to touch. ‘I was talking to one of the guests and his wife. I bent down to hear him because there was a lot of noise, and when I turned around his wife was on the floor after being hit by a bullet.

In the ballroom, as Federici’s group lay on the floor, their luck turned. Some of the terrorists were on the hotel roof, tossing grenades at the crowds below. One grenade drifted back towards the hotel, cracking a window in the ballroom.

‘We got an ice bucket, smashed through the crack and tied the curtains together,’ says Federici. ‘We got half our group down, then the rescue services brought over a ladder. We were just lucky.’

As dawn broke Oberoi was also safe, having led the last of his group to safety through the staff stairwell. After going home to shower, he began visiting the local hospitals. ‘That was the worst. Suddenly you see the young guy who told me he was getting married in three months’ time, and he’s gasping for breath. These are sights I will not forget.’

Federici was taken to the Australian embassy. ‘The bodies started coming in of the people standing next to us in the lobby at the beginning. It was like a morgue. We just fell silent.’

In a remarkable display of defiance, Oberoi reopened the Taj restaurant a mere three weeks after the attacks. ‘When I came back, I looked at the bloodstains, the whole place riddled with bullets, and I was angry. I said, “We have to get this place back.”’ On Christmas Eve, he recalls with pride, the restaurant was full. 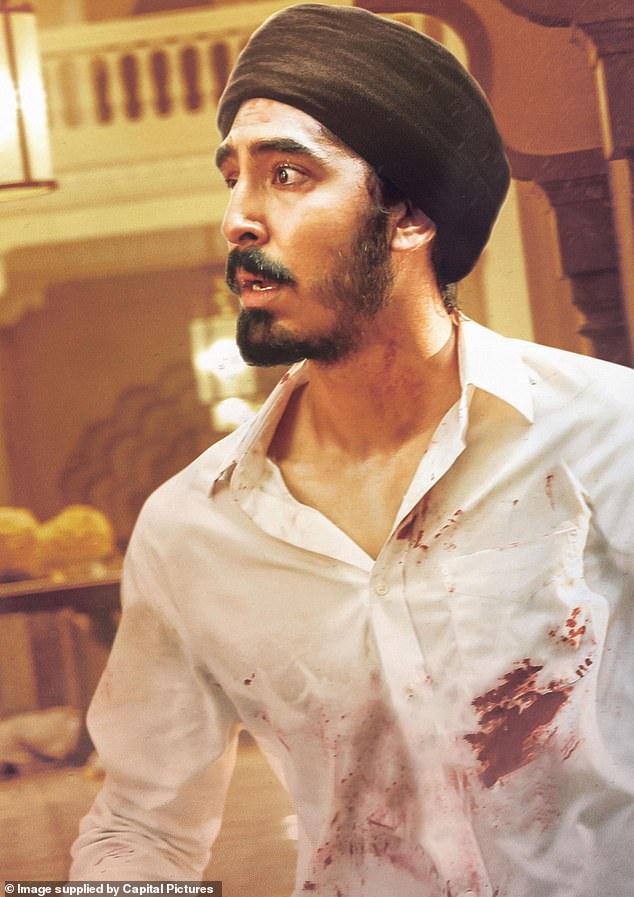 Dev Patel as waiter Arjun. ‘Hotel Mumbai’ is released in cinemas and is available for same day viewing on Sky Cinema, from Friday

Federici also returned to the Taj, to shoot the ad campaign for the hotel’s relaunch. The end of Hotel Mumbai includes real-life footage of her photographing staff celebrating the relaunch. ‘I was in tears,’ she says, ‘It was an emotional moment.’

Perhaps surprisingly, both feel compassion for their attackers, nine of whom were killed before the siege ended. The ringleaders have never been brought to justice. ‘They were young, illiterate boys, told that they would go to heaven and their families honoured,’ says Federici. ‘They were brainwashed. It’s incredibly sad, but if you let them diminish you as a person, they’ve won.’

‘Hotel Mumbai’ is released in cinemas and is available for same day viewing on Sky Cinema, from Friday