Caravaggio’s Rome was rough around the edges. When the young artist lived there at the turn of the 17th century, it was fractious and full of painters.

Brawls were common, arrests even more so. Caravaggio was almost a regular in Rome’s prisons and eventually fled the city after killing a man.

Romantic city: The lovely view over Rome’s rooftops and towards the Emmanuel II monument

Later in life, he was said to bear a closer resemblance to a swordsman than an artist. He had a fierce temper and an explosive brush. His art caused a sensation. It was dark, violent, realistic. Biblical tales were brought to alarming and often grisly life.

In ‘Caravaggio: A Life Sacred and Profane,’ Andrew Graham-Dixon describes the artist as painting ‘with a strong and unmistakable sense of the perils and powers of looking’.

Caravaggio placed miracles, legends and martyrs in the cities in which he painted, using real models, familiar settings and depicting such depths of emotion, his work was scored onto the viewer’s retina. 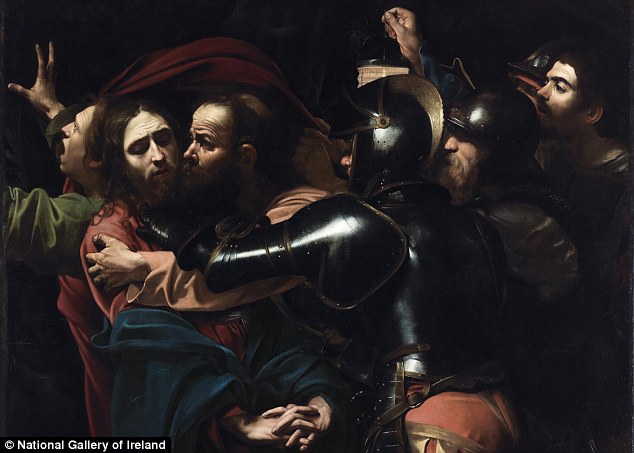 Drama captured: TheTaking of Christ, painted by Caravaggio in 1602

The influence of Caravaggio’s art was profound and immediate.

Artists working in the 17th century like Bartolomeo Manfredi, Giovanni Baglione, Orazio Gentileschi and Jusepe de Ribera paid homage, imitating his style, iconography and use of light and dark (the famous chiaroscuro). Their works are on display at the National Gallery’s exhibition Beyond Caravaggio, which has opened in London, alongside six works by Caravaggio.

Much of the art on show had at one time or another been attributed to Caravaggio. One piece, The incredulity of St Thomas by Giovanni Antonio Galli, still sits in a 19th century frame bearing the artist’s name. 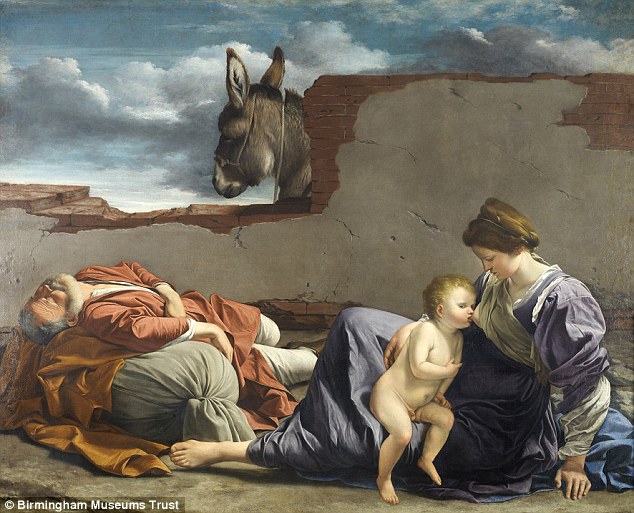 Debt to the artist: The Rest on the Flight into Egypt by Orazio Gentileschi (1563-1639)

While demand for Caravaggesque works faded, his work continued to inspire artists including Picasso and film director Martin Scorsese.

But if you want a glimpse into Caravaggio’s world and to imagine what it was like for people to see his work for the first time, there is no better place to visit than Rome.

You can view his paintings in the spaces for which they were designed, in chapels where mass still draws a daily congregation and alongside the outpourings of his contemporaries, whose paintings dim in comparison.

His first public commission was for the Contarelli Chapel in the church of San Luigi dei Francesi near the Pantheon and it was a gamble.

At 29, he was young and had only painted secular pieces for domestic use. It’s a big space to fill and the themes – The Calling of Saint Matthew and the Martyrdom of Saint Matthew — involved multiple figures.

But the result was a success. These are, apparently, Pope Francis’s favourite pictures. They are full of action, surprise, lavish fabrics and luminous flesh. 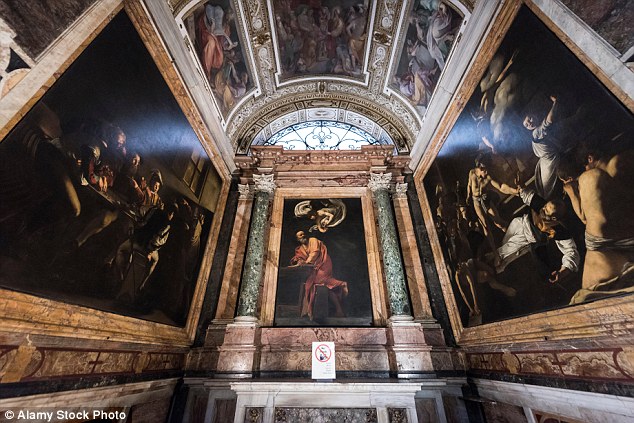 The middle painting of Matthew and the Angel was added later after the intended sculpture was deemed a failure. Caravaggio’s first attempt was also rejected because St Matthew was shown with bare, dirty feet and the angel was considered too sensual.

Caravaggio was criticised on another occasion for his voluptuous rendering of the Madonna.

Of course you can’t enjoy art without coffee to keep your focus. And Sant Eustachio Il Caffe, a short walk away, serves some of the best in Rome. You can buy some to take home, too.

Be sure to travel with a pocketful of change. In the Cerasi Chapel on Piazza del Popolo you feed euros into a machine and Caravaggio’s works – the Crucifixion of St Peter and Conversion of St Paul on the way to Damascus – emerge from the shadows. 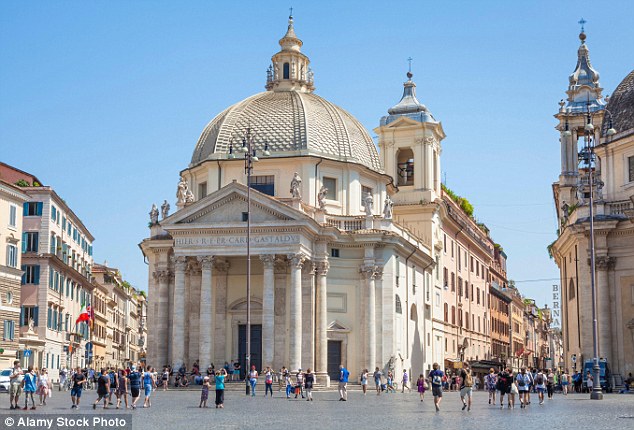 Holy sight: The Cerasi Chapel on the Piazza del Popolo in Rome is home to Caravaggio’s The Crucifixion of St Peter and The Conversion of St Paul on the way to Damascus

Caravaggio showed human struggle in devotional paintings and at the time this was considered shocking.

Renaissance art had celebrated perfection — everyone had clean feet and the angels were cherubic, whereas Caravaggio was suspected of using prostitutes to pose for the Virgin Mary and his pilgrims bore the dirt they’d picked up on their journeys.

Nor did he shy from showing the rigours of old age. 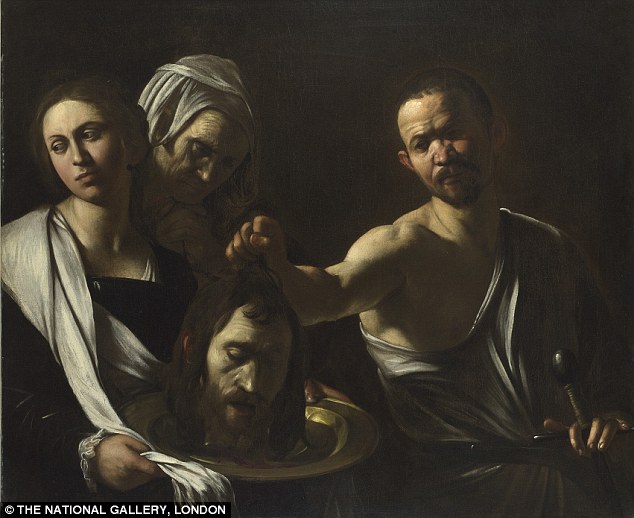 Shocking: Salome Receives the Head of John the Baptist, by Caravaggio, probably 1609-10

And the face of the sad old woman in Salome Receives the Head of John the Baptist in the National Gallery show.

At the Borghese you can also see some of his earlier work and the disturbing St David with the head of Goliath in which the painter appears.

His is the greying, decapitated head and this was a plea for his real head to be spared from the gallows after he murdered a man in Rome.

Go to the Villa Borghese at the end of the day and you’ll find it quieter. Wander through the extensive gardens on your way out as the sunset turns the rooftops pink. From here, it’s a short walk to the excellent Ristorante Nino. 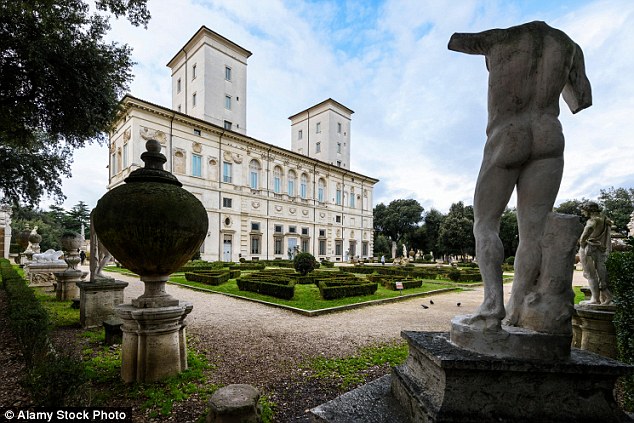 Gorgeous gallery: Villa Borghese and its lovely grounds which make for a scenic evening walk

Those who want to continue the Caravaggio pilgrimage should head to Naples, where he sought refuge in 1606/7 and painted several works including The Seven Works of Mercy for the Pio Monte della Misericordia.

The chapel in the historic centre continues its mission to serve the poor, though today its charity assists young drug addicts.

Above the sprawling city is the Museum Capodimonte from which you can see the sea and toiling port below. This is home to one of Caravaggio’s greatest masterpieces, The Flagellation of Christ. Christ glows serenely amid the brutality of his attackers. Its impact is astonishing.

Though Caravaggio is best known for the way he treated light and dark, Letizia Treves, curator of the National Gallery exhibition, thinks his greatest legacy is story-telling. And, like the finest story-tellers, his tales stay long in the memory.

Travel Facts: Plan your own escape to Rome