There is golden-hued cider chilling in the fridge. It should go perfectly with the fillets of smoked eel waiting to have a lemon squeezed over them.

Come to think of it, I, too, am feeling remarkably chilled as a breeze rustles the trees and hammocks sway outside.

Outside our mobile home, that is. We are staying at Haven’s holiday park at Burnham-on-Sea, Somerset.

Haven’s holiday park at Burnham-on-Sea, Somerset has pools, slides and an incredible range of activities from aqua-gliding to archery

We are well away from noisy fun and games, tucked away in a leafy glade. Once, our children would have revelled in the pools, slides and incredible range of activities from aqua-gliding to archery (and that’s just the As).

But we are empty-nesters now. The appeal of this holiday park is as a gloriously relaxed base from which to discover rural Somerset. For a fraction of the price of a middling B&B, we have a double room with an en suite, a living room, a kitchen and a dining area. We’ve got more space than in a five-star hotel suite.

We kick off with a stroll down to the promenade. Burnham-on-Sea is a bit of a secret even to regular visitors to Somerset resorts such as Weston-super-Mare.

Nothing says English seaside like a pier, but Burnham’s is minuscule — little more than 35 yards long.

It looks almost like a model of a proper pier but for the real, though scaled-down, essentials such as bingo, sticks of rock, and the bells and ker-chings of penny-slot amusements.

The pier looks even tinier against the vast expanse of the Gore Sands and Stert Flats, where the River Parrett spills into the Bristol Channel. At low tide the seafront is a mile and a half from the water; it’s the second longest tidal range on earth. (First place goes to the Bay of Fundy in Nova Scotia, Canada, since you ask). 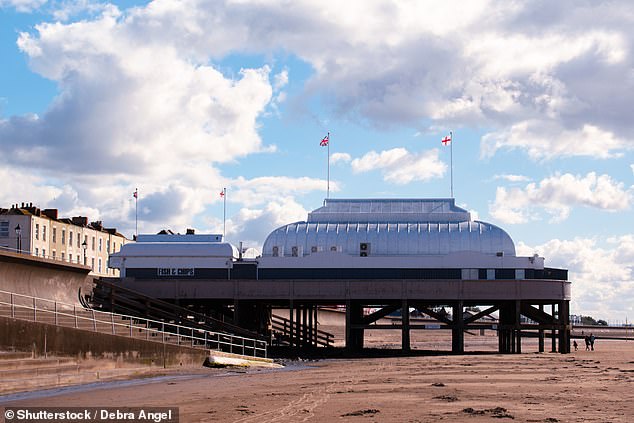 Martin says nothing says English seaside like a pier, but Burnham’s is minuscule — little more than 35 yards long

We heed red flag warnings that the tide might race in like Usain Bolt, so instead of a dip we plod barefoot along the beach. Towards its north end we reach Burnham’s iconic structure, the red-striped wooden Low Lighthouse, sitting on long legs in the middle of the muddy flatness. It has been warning ships about shifting sands in the Bristol Channel since 1832.

We gaze beyond to a tantalising dazzle of coastline. South Wales is on the horizon, reached — if we were giants — by the islands of Steep Holm and Flat Holm, spaced like stepping stones in the Bristol Channel. Southwards rises the undulating spine of the Quantock Hills.

The next day we walk along the estuary of the River Parrett, following a stretch of the Parrett Trail footpath, which takes us into a corner of England where life moves at a pace that’s rare in the modern world.

We amble into the reed beds and arrow-straight dykes of the Somerset Levels. These are precious wetland wildlife habitats, especially for cranes which have been re-introduced after a four-century absence. 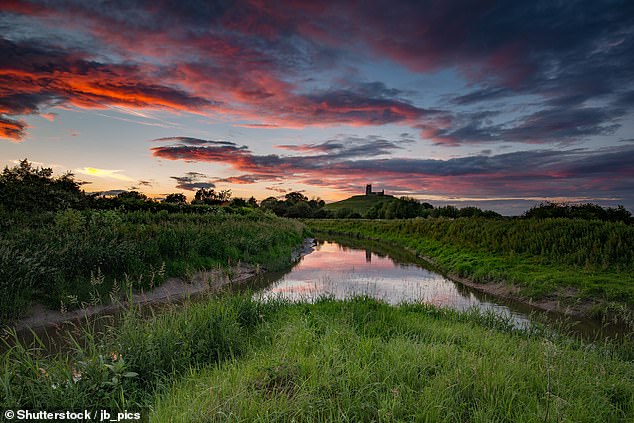 The Somerset Levels, which are precious wetland wildlife habitats, especially for cranes which have been re-introduced after a four-century absence

The cranes are notoriously difficult to spot, so we are elated when we spy a trio of these three-foot-high beauties hiding in a grove of waterside willows.

Driving further afield, we follow narrow lanes leading ever deeper into ancient meadows and apple orchards. Cider is at the heart of this country, rather as wine is to Burgundy. For centuries, apple trees have blossomed in Somerset’s rich, damp soil. Trees bow under the weight of the fruit, and there are farms where you can stop and taste.

New cider aficionados, we select a light, dry, slightly fizzy brew in Burrow Hill. And we discover another local delicacy.

The eels that swim up the Parrett are, once caught and smoked, as much part of Somerset as the cider.

As partners they take some beating, which explains the contents of our fridge on our final, lazy lunch. Come to think of it, Burnham-on-Sea takes some beating.

Our stay at the holiday park has provided an idyllic few days in the West Country: wildlife walks, local tipples and some understated kiss-me-quick, all on an astonishingly low budget.

HOW TO CLAIM YOUR HOLIDAY PARK BREAK FROM £15PP*

1. Collect three out of four passwords from the Daily Mail between Monday, July 15 and Thursday, July 18.

2. Enter your passwords at mailholidayparks.co.uk/go or attach them to the booking form inside Thursday’s pullout.