As Tramp turns 50, revel in the antics of a nightspot where royalty partied with abandon

You could walk past Tramp without noticing it. There is nothing about the Edwardian building to suggest that for almost 50 years it has been a byword for unashamedly decadent, champagne-fuelled hedonism.

The only hint of exclusivity is a discreet brass name-plate telling passers-by and would-be visitors that entry is strictly ‘members only’.

And yet for half a century, royals, Hollywood stars, the super-rich, the famous and the very beautiful have been lured down the dimly lit stairs to descend into the basement club in search of unbridled — and expensive — fun.

It was the nightclub where Princess Margaret felt reassured enough to let her hair down — and where her toy-boy lover Roddy Llewellyn launched his brief (and unsuccessful) singing career.

A 19-year-old Princess Anne’s enthusiastic dances are well-remembered and it was at Tramp that Prince Andrew first met Koo Stark. After his marriage, he and the Duchess of York were regulars.

Mick Jagger was a founding member and a frequent guest. On one occasion, staff held their breath when, while his estranged wife Bianca was in the ladies powder room, he appeared with Jerry Hall on his arm. Guido, the antennae-twitching maitre d’, expertly steered the Rolling Stone and his paramour to a darkened corner. 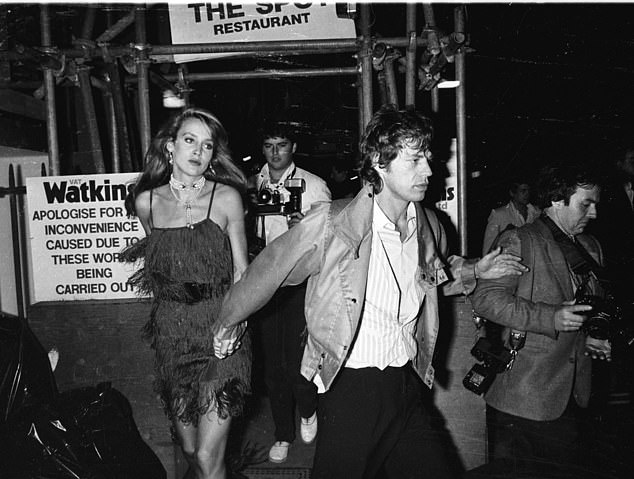 Mick Jagger and Jerry Hall were seen leaving the club together. Tramp is a hideout for the rich and famous

Roger Moore boogied with Cary Grant’s wife Dyan Cannon and once got down on his hands and knees to mop up after a flood, cajoling his friend Tony Curtis to give him a hand.

Novelist Jackie Collins, whose husband Oscar Lerman was one of the club’s co-founders, once said of the place: ‘It reminds me, in the nicest possible way, of an old whore — always there, always ready for your demands and always prepared to give you a good time.’

Naturally, the disco scene in the movie of her book The Stud, starring her sister Joan, was filmed in the club.

Birthday party for Tara Palmer-Tomkinson at ‘Tramp’ nightclub in London’s Mayfair. Pictured in 1998

Tramp’s clientele of showbiz stars and aristocracy ensured a stream of positive headlines. Peter Sellers, Joan Collins and Liza Minnelli all held wedding receptions there. Prince launched an album in the basement.

Inevitably, it was sometimes in the news for more controversial reasons.

For example, ex U.S. football star OJ Simpson, only recently acquitted of the murder of his former wife, popped in for a drink with film director Michael Winner.

Neil’s offence? Frequenting Tramp, where he met former Commons researcher Pamella Bordes, who was later revealed to be a prostitute. Worsthorne described her as ‘a gold-digging adventuress’ while pompously declaring nightclubs were not ‘suitable venues for editors of quality newspapers’ as they were unlikely to meet the Archbishop of Canterbury there.

Neil sued over the implication he knew his Indian-born girlfriend was a sex worker. As for Tramp, it made it known that it had, indeed, ‘entertained members of the clergy’.

Some years earlier, the club defended its reputation after a newspaper columnist alleged it was a disreputable establishment patronised by models that never model, actresses that never act and ‘tarty little pieces’. The club won substantial damages. 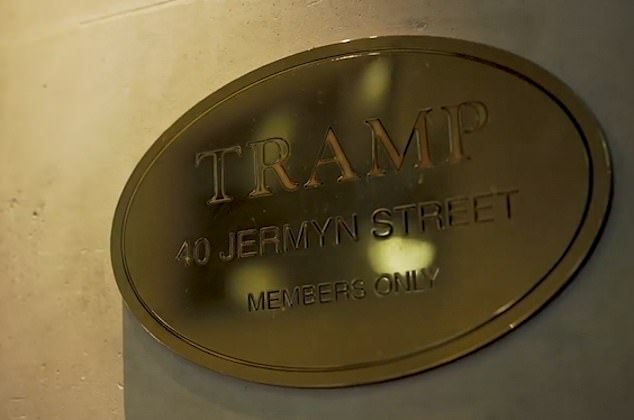 The once-troubled Marquess of Blandford — now the contented Duke of Marlborough — was arrested by police, as he emerged in the early hours from the club, over allegations of a stolen cheque book and claims that he’d made off without paying taxi fares.

Inevitably, perhaps, Keith Moon, the wild man of rock, left his mark on the place, by pulling a chandelier from its fitting. Notwithstanding being barred from the club, he later turned up strapped to the bonnet of a white Rolls-Royce completely naked.

There was also the time actress Shirley MacLaine fell asleep at a table and Mel Brooks got down on all fours and ran around under the tables barking like a dog.

All grist to its legendary status. 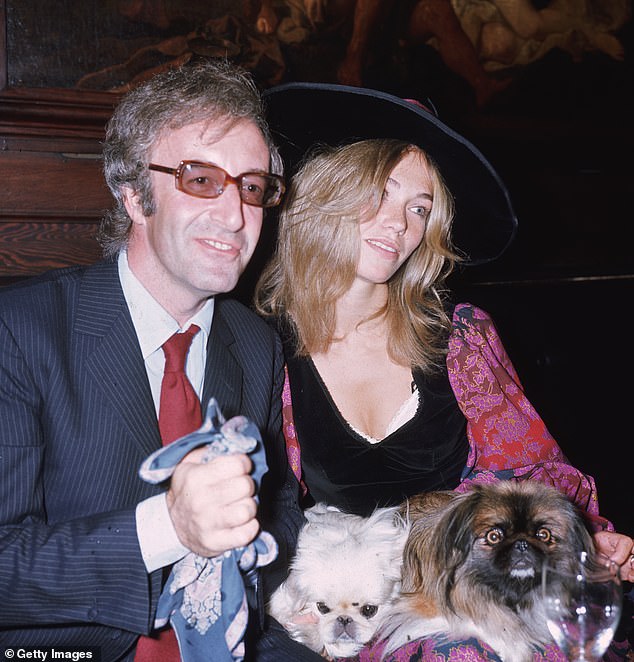 English comedian and actor Peter Sellers with his third wife, Miranda Quarry, the stepdaughter of Lord Mancroft, deputy chairman of Cunard’s, at their wedding reception at ‘Tramp’ in 1970

Tramp — it was always non-U to say Tramps — opened the year that Neil Armstrong walked on the Moon, John Lennon married Yoko Ono and the Troubles broke out in Northern Ireland.

And ever since, the subterranean venue has ruled London’s nightclub roost with its cocktail of glamour, glitz and girls.

Five years after the launch of Annabel’s, the virtuoso of nightclubs where perfectionism was the order of the day, Tramp went for a more relaxed vibe.

Unlike Mark Birley’s Berkeley Square niterie, male guests didn’t need to wear a tie. And while girls dressed up for Annabel’s, they undressed for Tramp.

There was one other key difference: no men without women, a rule designed to stop it becoming a pick-up joint.

Radio 1 DJ John Peel was turned away for breaking that rule. ‘Wife, girlfriend or mistress,’ the late Welsh lothario Dai Llewellyn told me. ‘Of course you had to be a member.’

It was the brainchild of Johnny Gold, a larger than life former bookie turned impresario, who started the club with Jackie Collins’ husband, and a third partner Bill Ofner, 13 days before the Sixties ended. They had taken over the premises of the Society club, once the haunt of Guards officers and where the Queen Mother celebrated a win on the horses.

The oak panel walls and stucco zodiac ceiling remain to this day. Gold invited 300 friends and celebrities to become founder members for the princely sum of £10.50 a year. Today, annual membership is £1,000.

‘I thought we might get two or three years out of it,’ Gold once commented. Fifty years later, the club is still thriving.

‘Demand for membership didn’t just soar, it spread like an uncurbed virus,’ Gold said. ‘I never realised I had so many friends.’ His vision was always about the mix, what he called the ‘right people’.

Discretion was the order of the day — that’s why the royals liked it so much.

Peter Sellers and his third wife, socialite Miranda Quarry (now the Countess of Stockton), held their wedding reception in the club.

The actor liked to bring Princess Margaret and Lord Snowdon. If her photographer then-husband was working, Sellers and Margaret went a deux.

‘I don’t think anything ever went on between them,’ recalled Gold in his memoir Tramp’s Gold. ‘From my observation, they were genuinely just good friends.

‘Peter always had a crush on Princess Margaret and, to an extent, it was reciprocated. He even offered to swap wives with Tony (Snowdon) but although the delectable Britt Ekland (his second wife) was on offer, the noble photographer declined.’

Among those there on the opening night — December 18, 1969 — were Sellers, Michael Caine, Natalie Wood and Richard Harris. Overnight, Tramp became a hang-out for the film and rock ’n’ roll elite. The Beatles, the Stones, The Who, Marlon Brando and Charlton Heston to name but a few. Richard Burton and Elizabeth Taylor would drop by. 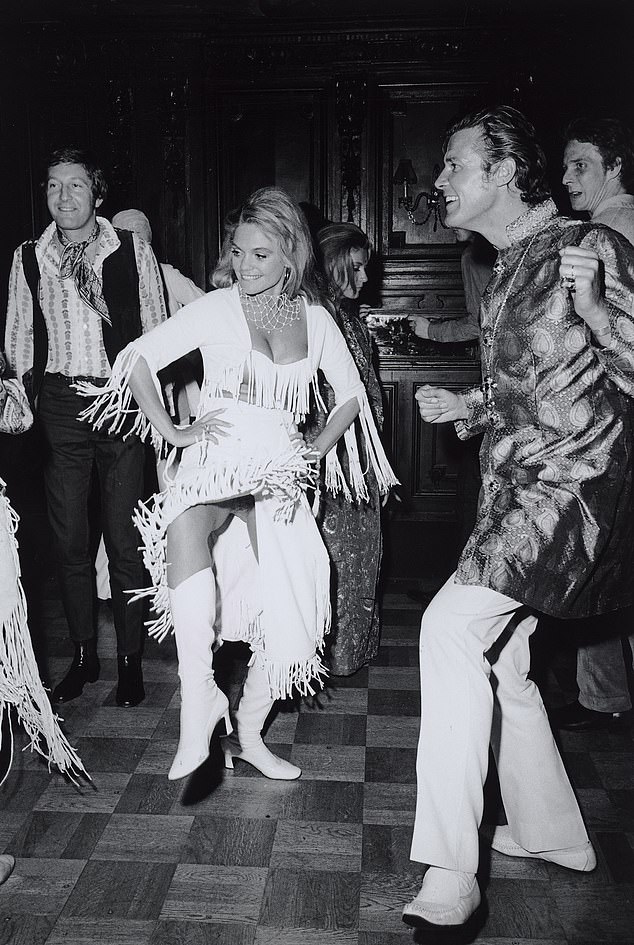 Roger Moore and Dyan Cannon dancing at the nightclub. It is not clear when this was taken

Its unassuming entrance at 40 Jermyn Street, in St James’s, also became famous one night in 1993 when Jack Nicholson French-kissed a tramp, to the delight of the waiting paparazzi.

A worse-for-wear George Best unwisely tried to pick a fight with Michael Caine — no one could remember why.

On another occasion, Michael Douglas, Kathleen Turner and Danny DeVito happily sat on steps up to the DJ stand because all the tables were full. ‘That would never happen in Los Angeles,’ Gold reminisced.

Tramp, it proved, was democratic — not elite.

Dodi Fayed, who died with Princess Diana, spent much time in Tramp as a young man. Gold recalled one night steering him away from a young woman. When he asked why, Gold replied: ‘If you must know, your father is f****** her!’

He later claimed that Diana and Dodi might still be alive if they had kept a lunch-date with him on the day of their fatal car crash. Dodi is thought to have taken the princess dancing at the club during their brief summer romance.

There are other troubling stories — one that might offend #MeToo activists. It was in Tramp that the former Rolling Stones bass player Bill Wyman, then 47, met 13-year-old Mandy Smith. They married six years later.

One night in 1985, pop star George Michael was drunk and vomiting in the nightclub. Management threw him out and told him not to come back.

A much more decorous guest was Victoria Lockwood, first wife of Earl Spencer, who held her sedate hen party there in 1989.

As a 19-year-old not long out of her school, Benenden, Princess Anne loved to dance. Once, she said she had to leave early as she had to attend the Remembrance service the following day. Asked about the solemn annual event, the princess said she always had an urge to stand on the Whitehall balcony holding a sign saying ‘Hello Folks!’

As the Eighties gave way to the Nineties, the Tramp crowd began to change. Socialite Tara Palmer-Tomkinson held her 27th birthday there — ever the exhibitionist, she wore a bikini, fur coat and snorkel.

But the man with a ringside seat at this most glamorous of venues is no longer there. Johnny Gold sold out after 30 years, although he remained at the helm for a little longer.

More recently, the likes of pop star Rihanna and David Beckham have been typical guests while David Cameron and film director Guy Ritchie have been spotted chatting in one of the darkened booths.

‘Celebrities don’t usually make you money,’ says the club’s general manager David Fleming, ‘because they like to drink water and tea, and they don’t like clubs that are busy.’

Inevitably, some tales have been exaggerated in the telling. A story that singer Lionel Richie was not admitted by the doorman until he crooned his hit Hello is said to be untrue, as is the claim that Russian spy Anna Chapman tried to pick up princes William and Harry there.

A bottle of Krug champagne is £450 and magnums of Roederer Cristal, drink of taste for many of the club’s clients, are £2,000. Fifty grams of Iranian Beluga caviar are on the menu at £280, but Tramp’s burger and chips are only £18.

The aristocrats and movie stars may have moved on, but Tramp endures as a rendezvous for the well-off and the well-connected who can party from dusk to dawn.