Has Asda triggered a stealth fuel price war for Christmas? Supermarket quietly cuts petrol and diesel by around 5p-a-litre after criticism for not lowering prices

After retailers were accused of ‘hanging on to massive margins for dear life’ and not passing on cheaper fuel costs to motorists, a supermarket has shown the first sign of instigating a fuel price war in the run-up to Christmas.

Analysis of daily changes to fuel pricing revealed that Asda has slashed the price of petrol by 4.5p-a-litre across its 320 UK filling stations in the last two days – and cut diesel by 5.5p – but without any announcement.

Before the pandemic, supermarkets typically made a big fuss of how much they were reducing their fuel prices in the build-up to the festive period in a bid to drive spending in their stores.

The RAC, which spotted the recent cut to Asda’s pricing, said the move was likely an ‘admission they should have come sooner’, but says there are grounds for prices to be trimmed by a further 10p per litre.

Has Asda triggered a stealth fuel price war? The supermarket has cut petrol and diesel prices in the last two days and is now 2p-a-litre cheaper than its ‘big four’ rivals

Asda’s recent cuts mean it is now charging an average of 153.5p for petrol and 176.7p for diesel.

This is around 4p-a-litre less than the UK average on Wednesday (157.8p for unleaded and 181.3p for diesel), importantly it is around 2p cheaper than rival supermarkets.

Yet the RAC says a significant price cut without making an announcement was surprising.

The motoring group’s fuel spokesman, Simon Williams, said: ‘While we’re pleased one major supermarket retailer has finally started heeding our calls to pass on the enormous drop in the wholesale prices of both fuels, the fact these price cuts have been made so quietly is surely admission that they should have come much sooner.’

When one of the ‘big four’ supermarkets makes cuts like this, it traditionally triggers a ‘fuel price war’ and the others – Morrisons, Sainsbury’s and Tesco – follow suit.

The timing of a potential fuel price war between the major supermarkets would be welcomed by any commuters forced to drive to work for most of next week by the planned rail strikes taking place over four days.

With the RMT union also set to lead a mass walk-out of around 40,000 railways staff over Christmas, cheaper petrol and diesel prices will also be greatly received by those who will have little choice but to drive instead of take trains to visit family and friends over the festive break.

‘We urge the other three supermarkets to catch up quickly – or go even further – and give drivers some much-needed relief from high prices next time they fill up,’ Mr Williams added.

‘If they do, this will bring the UK average petrol price down from its current 157.8p which benefit drivers everywhere.’

Yet, he says there is potential for the rival supermarkets to cut prices further.

The RAC’s analysis of recent wholesale prices shows there is ‘easily scope for another 10p-a-litre to come off the current average price of both petrol and diesel’. 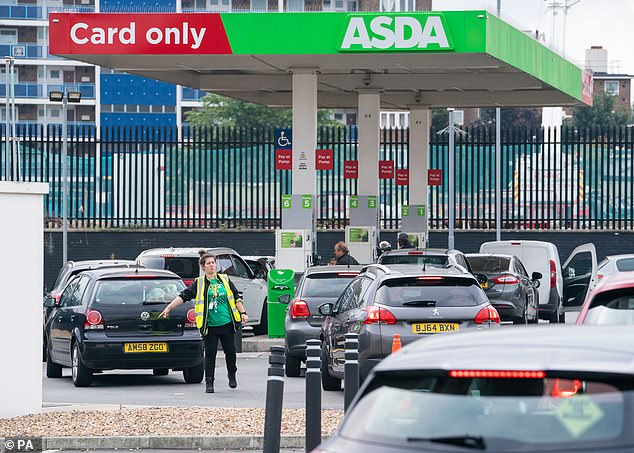 Earlier this week, the motoring organisation said the big four supermarkets’ failure to cut their pump prices saw retailers enjoy profit margins of more than 20p for every litre, which it described as a ‘scandal’.

It also comes in the same week the Competition and Markets Authority published an update on its investigation into the fuel retail sector, saying it had found evidence of ‘rocket and feather’ pricing in 2022.

The AA today said that fuel prices should be much lower than the current UK average, not least because both petrol and – as of this week – diesel wholesale costs are now back below where they were before war in Ukraine started and sent oil prices spiralling.

While wholesale diesel now costs less than what it did on 24 February – when Russia first invaded Ukraine – the average pump price for the fuel is 28p higher today than it was on that date.

The AA said that it ‘accepts that there will always be some lag between cost and pump-price movements’, but says the savings on diesel should be passed on at the pumps soon to help business and transport costs, and therefore reduce inflation.

‘Of course, the diesel cost collapse in November has been rapid and the pump prices will take time to catch up, but the cost versus retail price gap is huge. Fuel contracts will also take time to be updated but the most immediate victims are the small businesses, crafts people and rural businesses that are being denied a big cut in their operating costs,’ explained Luke Bosdet, the AA’s fuel price expert.

‘A 28p fall in the average diesel pump price slashes £22.40 of the cost of filling an 80-litre Transit van tank. It can knock close to 3 per cent off delivery costs.’