A cricket supporter has been forced to get a very embarrassing tattoo after Australia drew the Ashes series with England.

The man, dubbed by fellow cricket fans as ‘the crazy tattoo guy,’ promised to get the highest-rated suggestion on a Reddit forum inked onto his ankle if Australia did not win the series.

The series was drawn 2-2 – meaning Australia retained the iconic urn but did not technically win.

In a post titled ‘A promise is a promise,’ the man posted photos of his tattoo, reading: ‘Stuart Broad is my hero, Jimmy Anderson, my lover’. 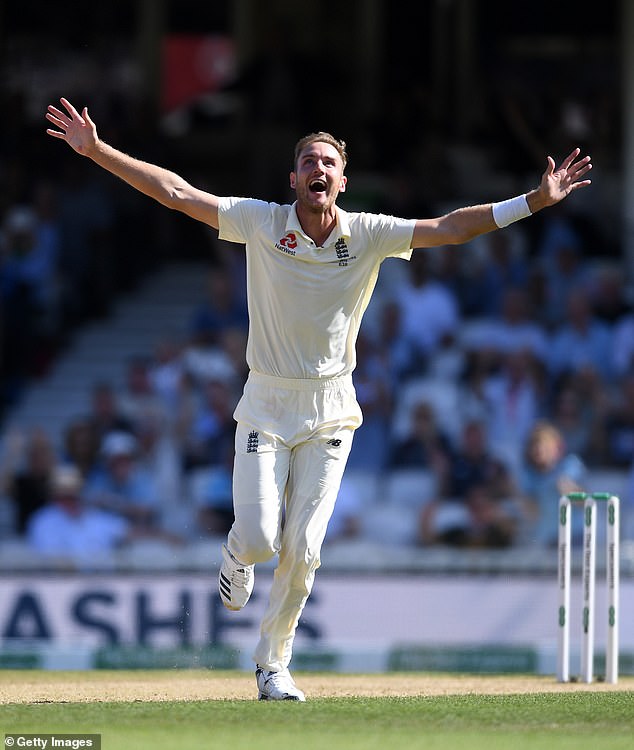 Stuart Broad of England celebrates dismissing Steven Smith of Australia during day four of the 5th Ashes Test at The Kia Oval on September 15, 2019 in London, England

The photos have been viewed over 280,000 times as of Wednesday morning.

The earlier bravado in the man’s initial post was conspicuously absent in his update.

‘Call it cockiness or confidence but I have faith in the Aussies (Smith) to bring home the goods.’

‘This is not a joke, I will genuinely ink up if the Aussies lose. I am a man of my word.’ the man wrote in his initial post.

‘Keep it to a sentence or two as I’ll get it on the side of my foot. Be creative. If I’m dumb enough to get a stupid tattoo to impress a bunch of random internet people I at least want it to be a laugh. Go Aussies.’

With two more years until the next Ashes series, the only clear winner in this situation was the tattoo artist.

With two more years until the next Ashes series, the only clear winner in this situation was the tattoo artist