The flame-haired superstar hit a sensational 135 to beat Australia on Sunday, levelling the Ashes with two tests remaining.

It came little more than a month after his pivotal role in beating New Zealand in the World Cup Final.

The 28-year-old’s performances have stunned the world of sport – but those who saw him play as a teenager are rather less surprised.

The picture below shows Stokes with teammates in Year 11 at Cockermouth School, Cumbria in 2007. Front and centre is their coach Chris Hayes, now 56, who said of the side: ‘They will always be the team that was my best ever.

Back row, from left:

Chris Hayes: Teacher who retired from Cockermouth School after 27 years.

‘We were able to compete at the top table against all the private schools on an even footing.’

Ben had arrived as a 12-year-old from New Zealand after his father Gerard took up a coaching role at Workington Town Rugby League Club. His sporting prowess soon stood out to parents of his fellow pupils.

John Barnes, whose son Greg can also be seen in the team picture, said Stokes was ‘head and shoulders above the rest’. His wife Christine joked: ‘You had to be careful where you parked your car if you went to a match when Ben was batting – he used to hit a lot of fours and sixes even then.’

Murray Spiers, father of Stokes’ school teammate Stuart, added: ‘Ben was a nice lad – although I do remember him eating us out of house and home in biscuits.’

Mr Hayes, who has now retired from the school after 27 years, said Stokes’ ability to ‘concentrate with that bat in hand is unbelievable’, adding: ‘He showed that on many occasions with us… he was a naturally able sportsman, physically very able and highly co-ordinated.’

The married father of two said he has ‘really happy memories’ of Stokes’ side and a ‘golden period’ for the school.

‘To begin with we had two very good cricketers in Greg Platten and captain Hugh Gimber.

‘There was usually one county-level cricketer each year so to have two was special; then Ben joined in Year 8, so we had three, which was exceptional.’

He said the team’s biggest achievement came after winning the Lord’s Taverners under-14s competition in Cumbria, then entering at national under-15s level. ‘We reached the semi-final where we played Shrewsbury School, who are a top private school and had won the competition the year before.

‘We lost, but if we had played them ten times, we would have won five. We were a very good team.’

Stokes is also remembered for his prowess at rugby union, with Norman Pitts, the 80-year-old chairman of Cockermouth Rugby Club, believing he could have had a future in the game. He said: ‘He scored some good tries. He liked to take the ball on.’ Thankfully for cricket fans, he chose the smaller, rounder ball, honing his skills at Cockermouth Cricket Club. 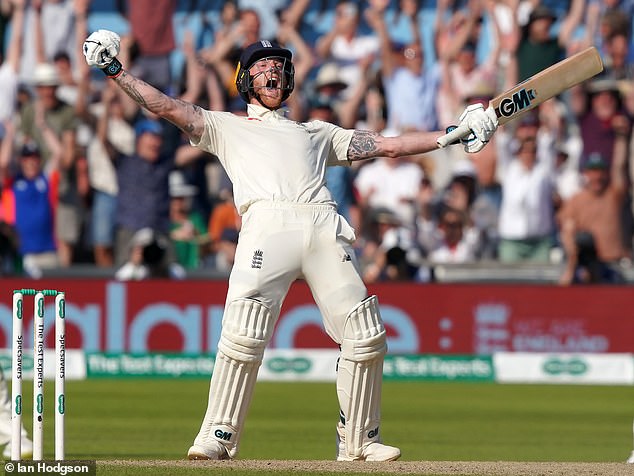 Victory: Ben Stokes roars in celebration after hitting the winning runs to seal an incredible comeback victory over Australia in the third Ashes Test at Leeds

Former coach John Gibson recalled being astounded by his talent. ‘He could hit the ball harder than anyone we had before – the most talented cricketer I ever coached,’ he said.

Mr Gibson put Ben’s future success down to his dedication, adding: ‘If he had had a tent he would have slept under the covers.’

Club president Raymond Denholm, 83, also recalled his determination. ‘Ben was a rascal but dedicated. He was first one here and I had to chase him away at nine o’clock at night,’ he said.

‘He played two particularly brilliant games that year,’ he said. ‘Against our rivals Workington he got a maiden 50 not out by hitting their top spinner over the head for a six. In another game he got five wickets.’ The teenager was then ‘whisked off’ by Durham County Cricket club after playing for Cumbria Juniors against their academy side. ‘That was the last season we saw Stokes play for us,’ said Mr Minshaw.

‘We thought he was going to be a county cricketer, at least, but didn’t expect him to turn into the superstar he is. For us to have played a small part in his development is absolutely tremendous for the club and region.’

Last month, Stokes returned to Cockermouth Cricket Club to receive honorary life membership. Accepting the award, Stokes – who presented his old club with a shirt signed by England’s World Cup winners – said: ‘Wherever I go I don’t forget this is where I grew up and learned the game.’