First Daughter Ashley Biden is proving that variety really is the spice of life during her trip to California, where she was seen picking up some drinks at a local gas station – just one day after enjoying a designer shopping trip.

The 40-year-old, who is the only child of Joe, 78, and First Lady Jill, 70, was pictured making her way out of a Shell gas station in Malibu on Monday, putting on a very low-key display in a pale pink tank top, dark grey jeans and sneakers.

Ashley, who is married to Philadelphia-based surgeon Dr. Howard Klein, looked as though she was trying to go incognito during the outing, for which she sported dark sunglasses and a khaki-green evolvetogether face mask.

She accessorized her casual ensemble with a black fanny pack, colorful sneakers, and plenty of jewelry – including large hoop earrings, a stack of bangles, and several chunky rings – although she chose to go without her wedding band.

Ashley was accompanied by a burly-looking Secret Service agent as she emerged from the gas station, clutching a brown paper bag containing her purchases.

Under the radar: First Daughter Ashley Biden put on a very low-key display as she picked up some drinks at a gas station in California on Monday 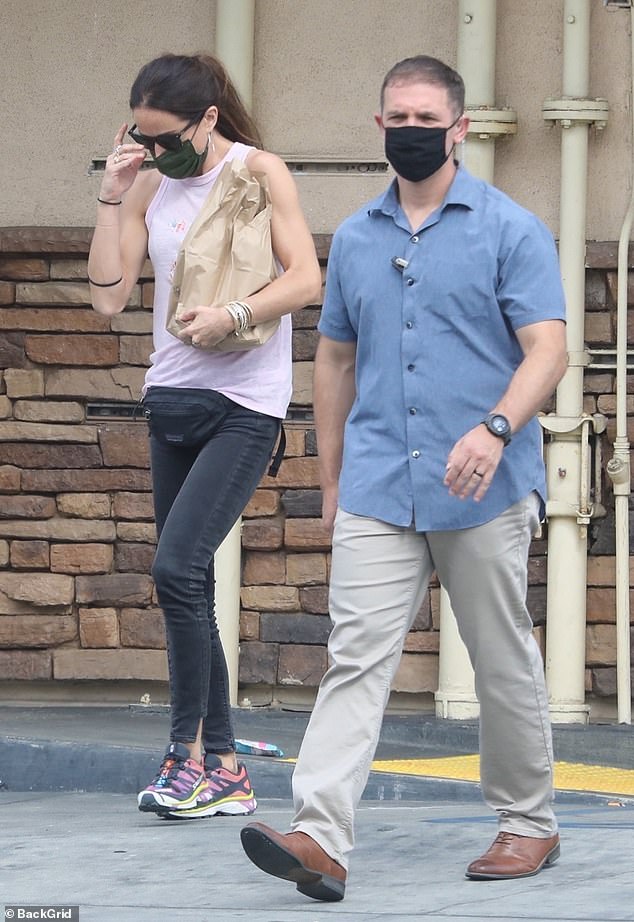 Low key: The 40-year-old looked very casual in a pale pink tank top, a pair of dark grey jeans, and some colorful sneakers, and she kept her face covered with sunglasses and a face mask

Ashley flashed a tattoo on her forearm as she emerged from the gas station, sporting a black fanny pack around her waist and a stack of bracelets on her left wrist

Her gas station trip came just one day after she was pictured doing some much more high-brow shopping during an outing to outdoor shopping mall Malibu Country Mart on Sunday.

Ashley stopped into several stores during her shopping excursion, including jewelry brand Gorjana, and high-end fashion boutique Ron Herman – from which she was seen leaving with a large carrier bag in tow.

The store offers a variety of designer clothing and jewelry from a range of brands, including pricey accessories label Spinelli Kilcollin and fashion favorite Acne Studios.

Prices on the store’s website – which includes both men’s and women’s offerings – range from $35 for a simple pair of socks to a staggering $12,800 for a chain link necklace.

Ashley seemed keen to remain under the radar during her shopping trip, throughout which she kept her green face covering on as she browsed in the stores, and spent some time lining up for one of the public restrooms at the mall.

She was joined for the outing by a male pal, who was seen sitting outside of the bathroom waiting for the First Daughter to emerge, before helping her with her shopping bag.

The unnamed gentleman looked relaxed and casual in a pair of turquoise pants and a simple blue T-shirt, which showed off several large tattoo designs on his arms.

Ashley and her companion were also accompanied by a member of the First Daughter’s Secret Service protection, which she will have throughout her father’s time in the White House. 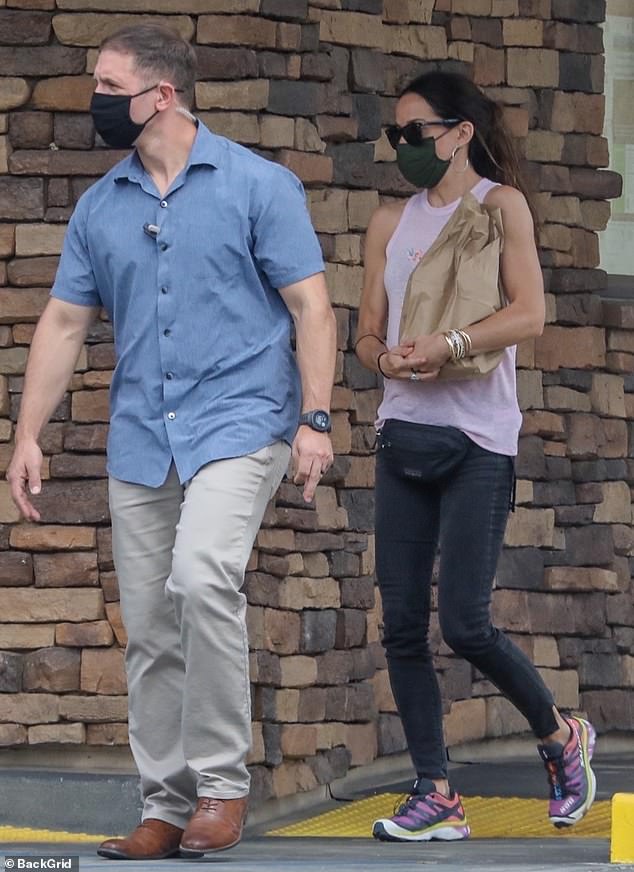 The activist was accompanied on her outing by a Secret Service agent, who walked a few steps ahead of her as she emerged from the Shell gas station 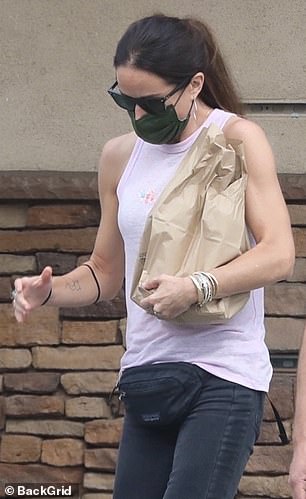 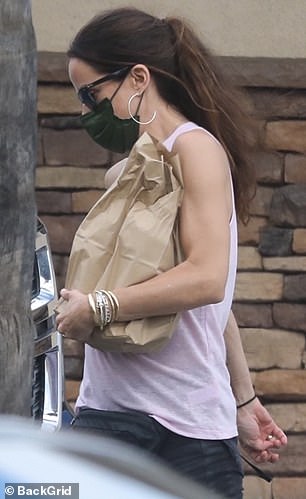 Ashley, who is married to Philadelphia-based surgeon Dr. Howard Krein, wore plenty of chunky rings but went without her wedding band 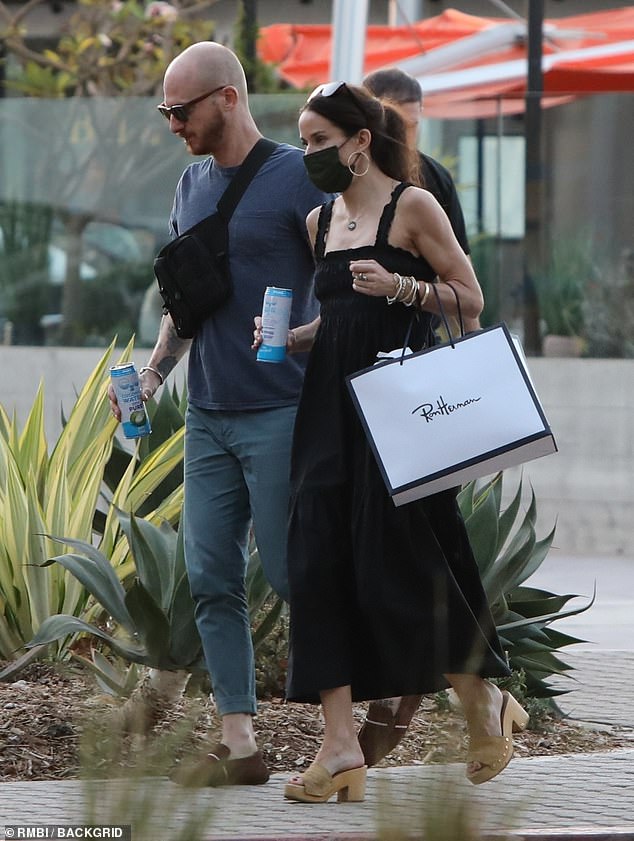 The agent, kept a respectful distance from the duo and was seen standing several paces behind them, wearing a blue plaid shirt and beige pants, with a telltale ear piece peeking out as he kept a watchful eye on Ashley.

Her shopping trip came just hours before her parents were pictured returning to the White House on Monday morning after spending the weekend in the family’s home town of Wilmington, Delaware.

Following his arrival back in D.C., President Biden wasted no time in hammering the Republicans for refusing to raise the debt ceiling, while admitting that he cannot guarantee that the US won’t default on its debt.

‘I think quite frankly it’s hypocritical, dangerous and disgraceful,’ Biden said. ‘Their obstruction and irresponsibility knows absolutely no bounds, especially after we’re clawing our way out of this pandemic.’

After averting a government shutdown last week, lawmakers’ next important deadline is October 18, which will be when the U.S. will no longer be able to pay its bills if Congress doesn’t lift the debt ceiling.

But while her father was dealing with a crisis in D.C., Ashley didn’t appear fazed – in fact she looked incredibly relaxed during her weekend shopping trip.

It is not known why exactly Ashley is currently staying in California, however it may be that she is paying a visit to her half-brother Hunter, 51, who relocated to Malibu earlier this year from his $5.4 million rental home in Venice Beach – reportedly over concerns about a lack of privacy. 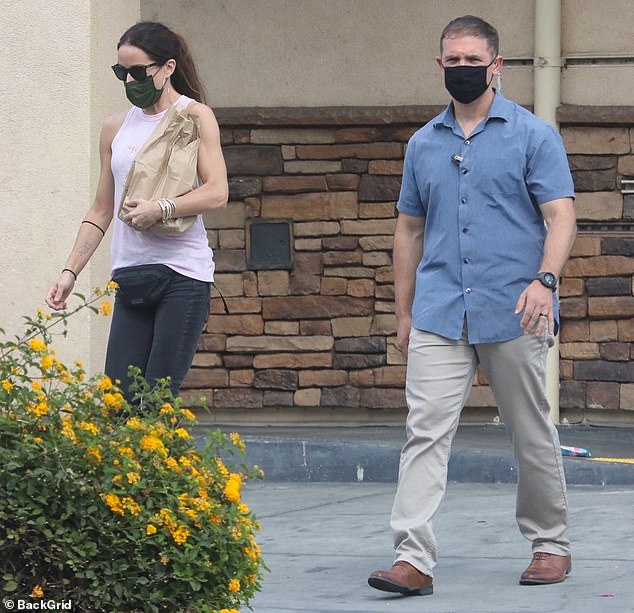 Family first? It is not known why exactly Ashley is visiting California, however it may be that she is spending time with half-brother Hunter, 51, who relocated to Malibu earlier this year 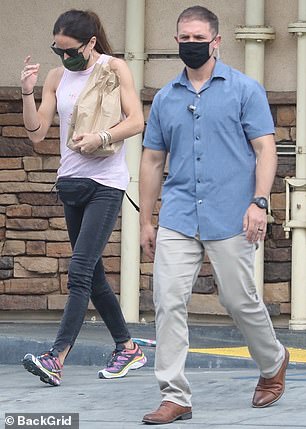 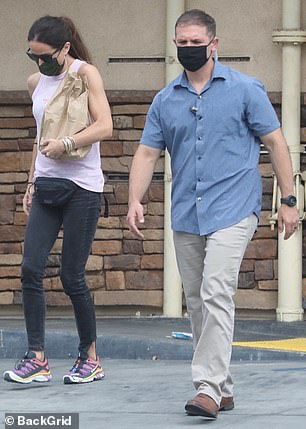 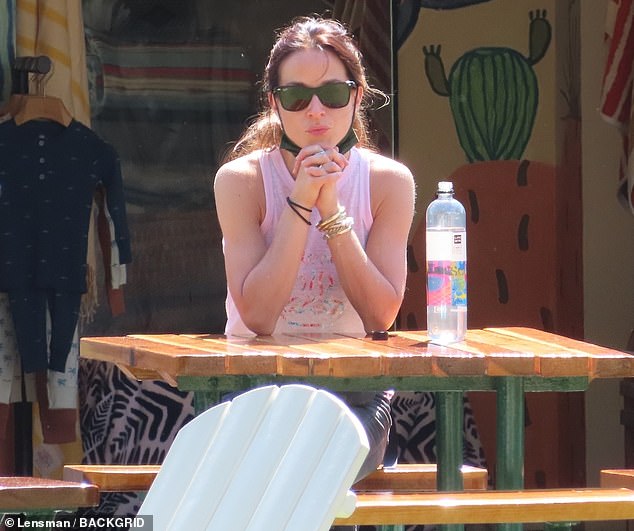 R&R: She was later seen cooling off with a cold bottle of water while perched outside a store in the area

Hunter is understood to have moved into a $20,000-a-month property ahead of the summer, along with his wife Melissa Cohen and their young son Beau, who was named after Hunter’s late brother.

And while he was not pictured with his half-sibling during her shopping trip, there is certainly plenty of room for her to stay in Hunter’s new home – which boasts 3,000 square feet of space, including four bedrooms, 2.5 bathrooms and 180-degree views of the Pacific Ocean.

Ashley – who, unlike former First Daughter Ivanka Trump, has always shied away from the public eye – is known to have a close bond with her older half-sibling, who is the son of President Biden and his late wife Neilia Hunter. 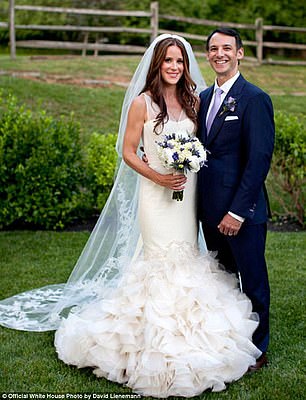 Like her older sibling Hunter, Ashley has had several public brushes with the law. She was reportedly arrested in 1999 for possession of marijuana, and again in 2002 for obstructing a police officer.

In recent years, however, she has turned her life around, focusing on building a career in social work and social justice.

Hunter however has continued to come under a great deal of scrutiny over his colorful personal life, including his drug addiction, for which he has been admitted to rehab on several occasions since 2003.

In 2018, he hit the headlines again when it was revealed that he had fathered a child with Arkansas-based stripper Lunden Roberts.

Controversy continues to cloud the President’s son – with a pair of emails published on September 23 revealing that he offered to help former business associates unfreeze Libyan assets in exchange for a $2 million retainer plus ‘success fees’.

The email exchanges were between mid-level Democratic donors Sam Jauhari and Sheikh Mohammed al-Rahbani, who in 2015 were both working on behalf of the new Libyan government to free up $30billion in state foreign assets. They had been frozen by the Obama administration under the deposed Muammar Gaddafi regime in 2011.

The emails – which were obtained by Business Insider – are unrelated to those on his laptop, which outlined a number of his other business dealings.