Ashley Cain and his partner Safiyya Vorajee broke down in tears during their baby daughter Azaylia’s funeral procession on Friday morning, after she tragically died last month following a brave battle with cute myeloid leukaemia.

Crowds lined the streets in Nuneaton as the eight-month-old was given a beautiful send off in a white horse drawn carriage, ahead of her private service.

The couple, who had documented their daughter’s fight against leukaemia on social media, named her funeral ‘Azaylia Day’, and asked for her supporters to come outside to pay their respects to their little girl. 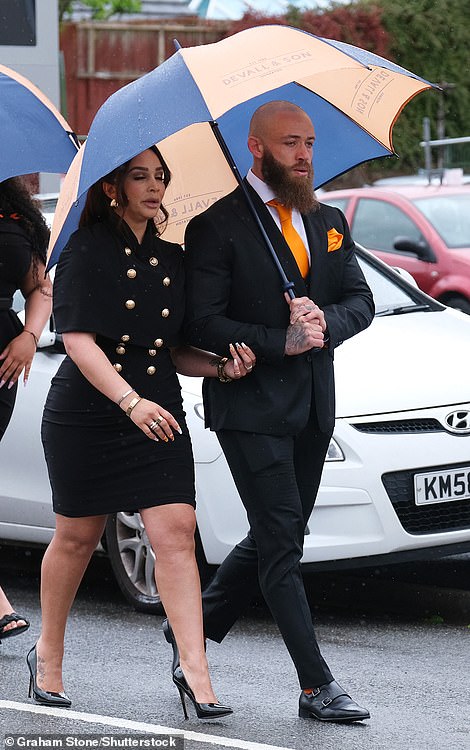 Always in our hearts: Ashley Cain and his partner Safiyya broke down in tears as they watched the funeral procession for their baby daughter Azaylia, who tragically died last month 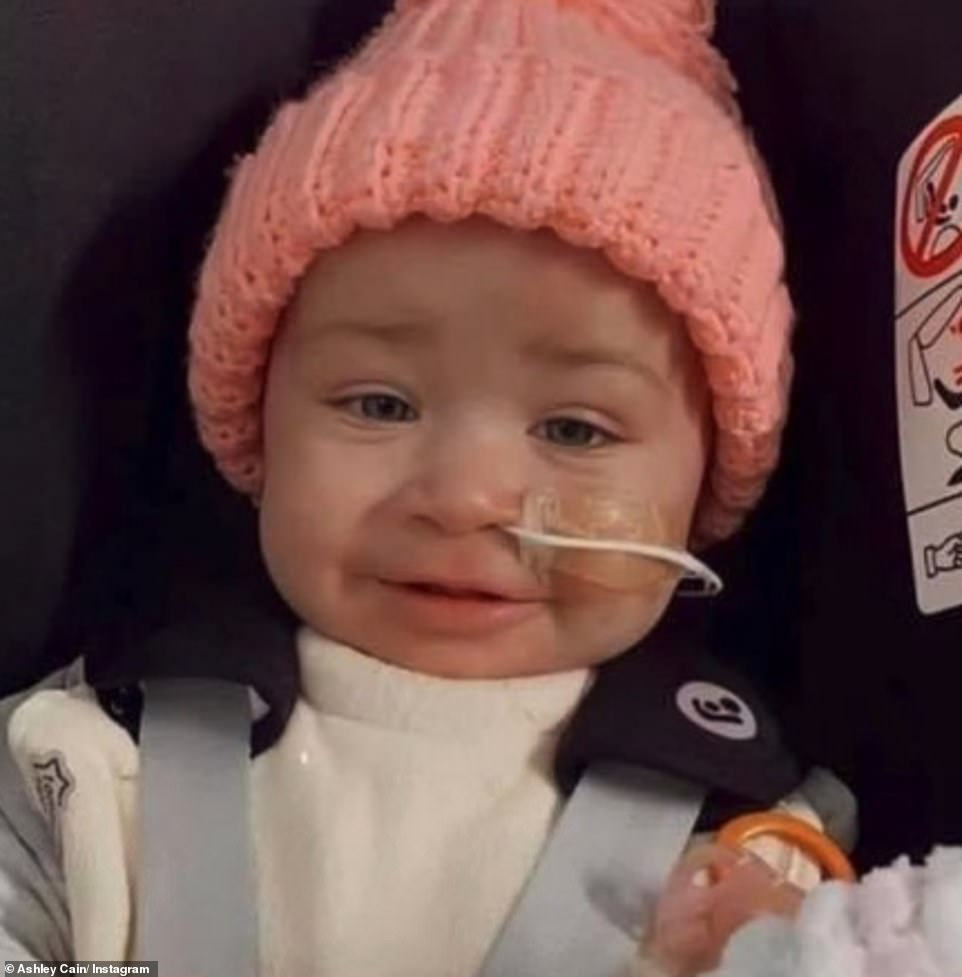 ‘Likkle Lion’: Azaylia battled acute myeloid leukaemia for the majority of her life and was diagnosed just two months after she was born

A grieving Ashley, 30, wiped away tears as he became overwhelmed with the emotion as the cortège began, with the crowd showing their love to the couple and Azaylia by clapping and cheering during the 15-minute journey.

In a symbolic reference to Azaylia’s nickname ‘likkle lion’, four white horses wore orange feathers and were draped in covers bearing her name.

Ashley and his male friends and family wore orange ties and pocket squares also in reference to Azaylia’s lion nickname.

Flowers surrounded her coffin, while a floral tribute of her name and Lion King toys were displayed in a hearse which followed the horse drawn carriage.

Azaylia was diagnosed with the rare blood condition at just two-months-old.

The couple previously announced the details of their little girl’s funeral, confirming her day of rest will be on Friday May 21.

Ashley shared the update with his followers, explaining that he and Safiyya had been planning Azaylia’s funeral and going back through their pictures. 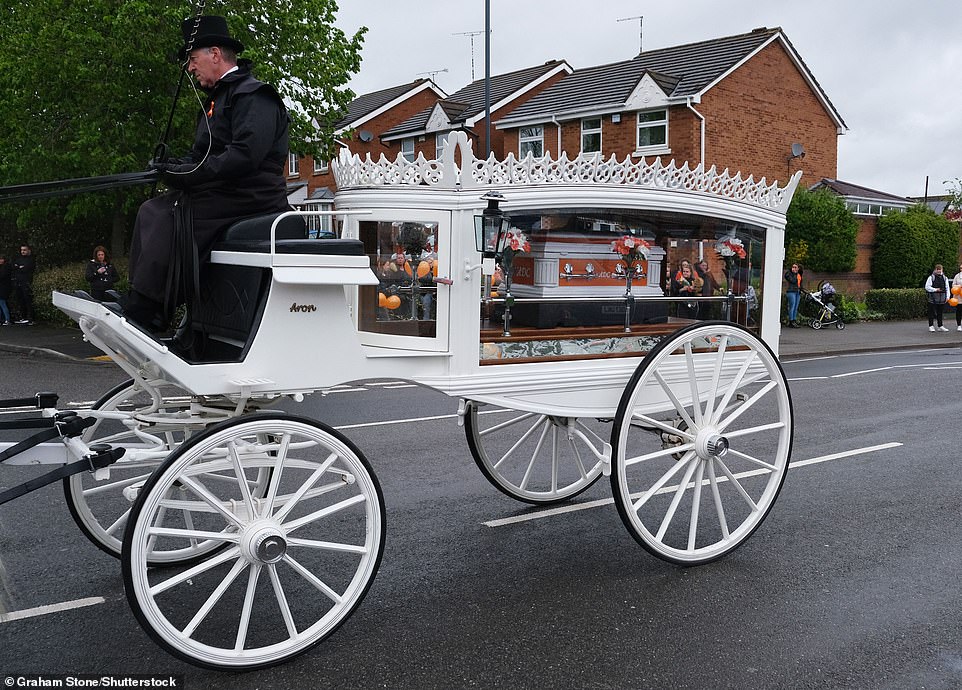 Farewell: Crowds lined the streets in Nuneaton as the eight-month-old was given a beautiful send off in a white horse drawn carriage 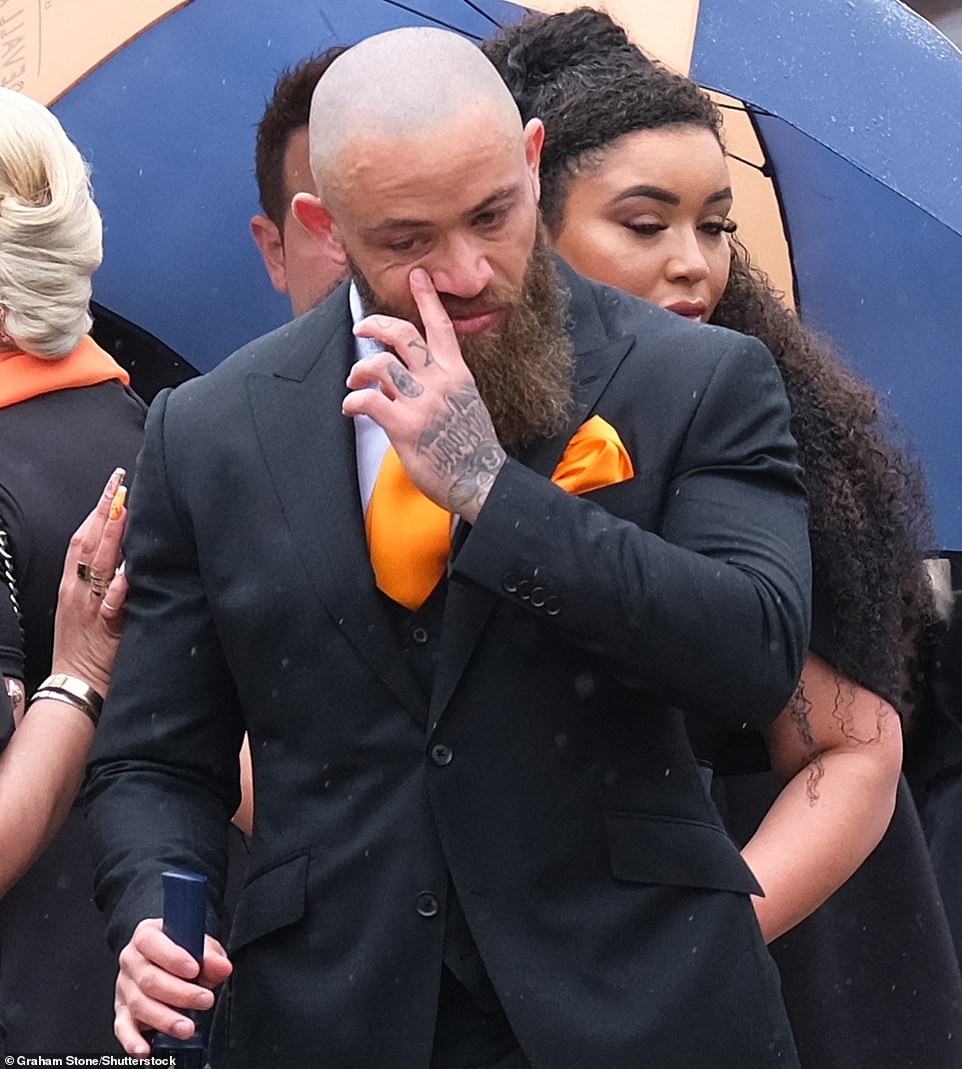 Grieving: Ashley wiped tears from his eyes as the rain poured down during the procession 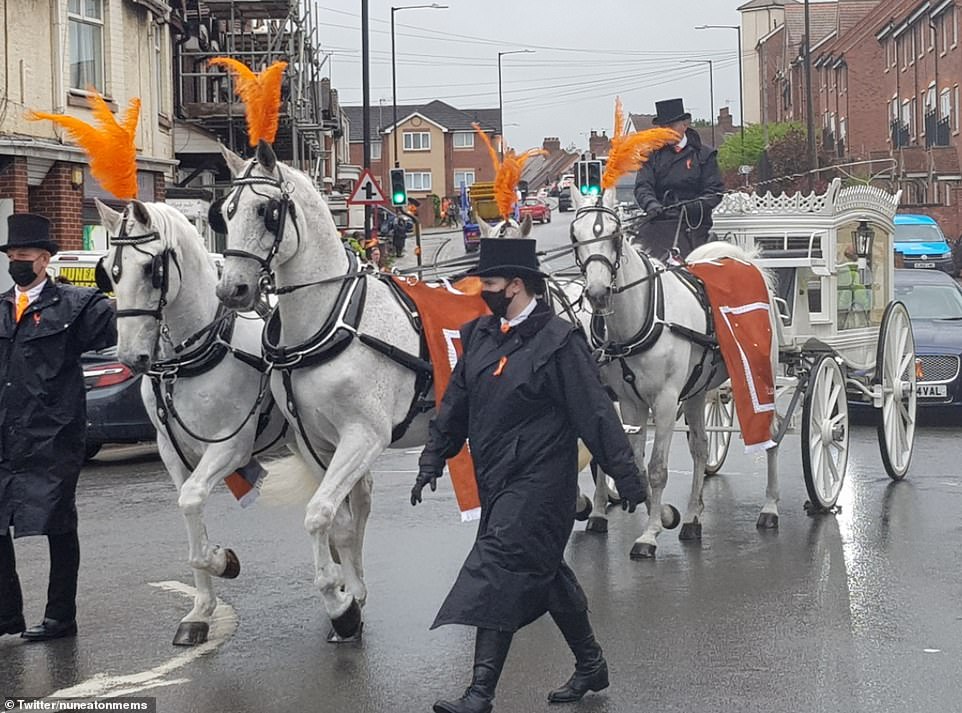 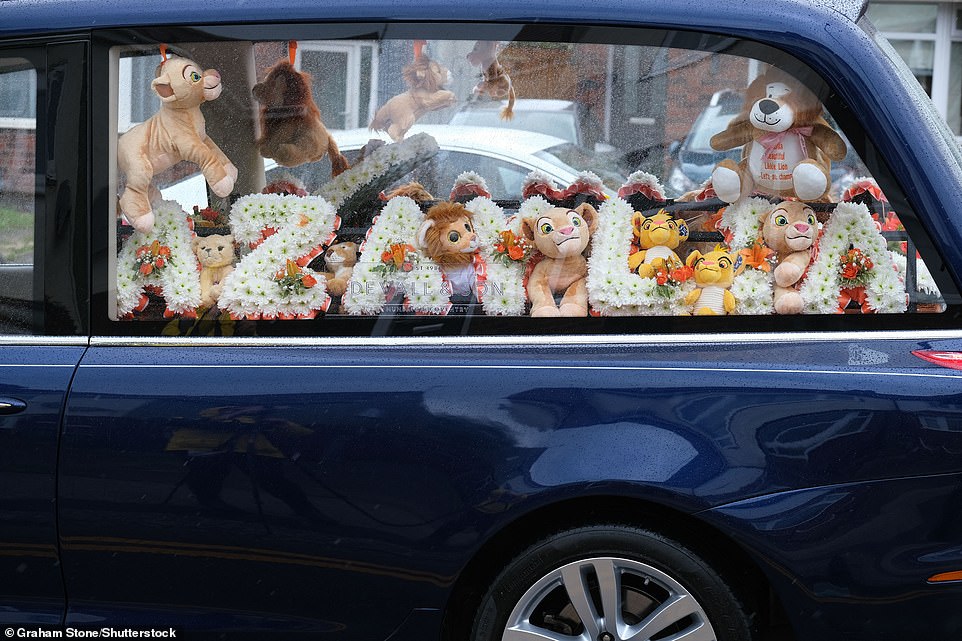 Heartbreaking: Lion King stuff toys and a floral tribute of her name were displayed in a hearse 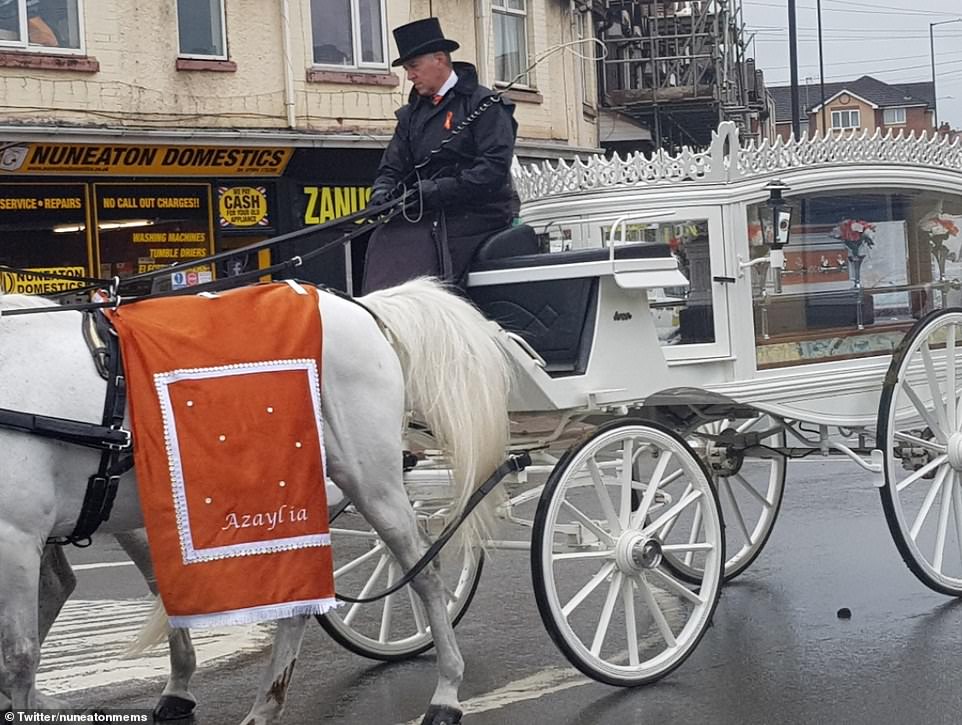 For Azaylia: In a symbolic reference to Azaylia’s nickname ‘likkle lion’, four white horses wore orange feathers and covers in a touching tribute to her courageous battle

He emotionally penned: ‘Me and Safiyya have been doing our very best to stay strong but it’s impossible at times.

‘We’ve just had to search through all of our pictures and videos to choose which ones to play on Azaylia’s day.

‘It has left us crushed at the reality of what has happened.’

Ashley then continued: ‘I live at the moment with constant pain in my head, aching in my chest and anxiousness in my belly.

‘The world seems grey through my eyes. The only colour I see is an orange sky when we’re blessed enough to have it.

‘A laugh isn’t a laugh, a smile is not a smile and my life is just not the same. It never will be again.

‘I try my hardest to get up and run, bike and occupy my mind. But I am just sad. So sad. I miss you so much Azaylia.’

The couple encouraged well wishers to line the streets of Nuneaton for her cortège as they shared specific timings and planned route for the 15 minute journey.

Azaylia lost her battle with acute myeloid leukaemia in April when she was just eight months old, and her parents want her funeral to be an ‘uplifting day’ and celebration of her life.

The couple wrote: ‘Azaylia’s Day. We would like to thank everyone for their prayers, words of sympathy & patience over the last few weeks, while we come to terms with the loss of Azaylia.

‘We have been incredibly moved by the support we have received far and wide and all the beautiful gesture of kindness will live in hearts forever.

‘We have been in correspondence with Warwickshire Police, to understand how we can give people who would like to pay their respects, the chance to do so.

‘Due to current restrictions the family will be attending a private service of celebration of Azaylia’s life, but prior to the Azaylia’s service we will be giving Azaylia her last journey through Nuneaton town. The route the cortege will be taking is along:

‘We would be touched and honored to see as many of those that wish, pay their respects to Azaylia by lining the streets somewhere along the route the cortége will proceed through.

‘We respectfully ask all attending Azaylia’s final journey to adhere to the current Covid legislation, to maintain social distancing and to keep within your family bubbles, this will ensure everyone is safe and following the rules that are set out.

‘As truly difficult as the day will be, we are going to give it our all to keep Azaylia’s day an uplifting day of remembrance for her life and encourage anyone attending to show their love by clapping and making joyous noise of celebration as the cortege goes by!

‘We would love to make her final journey a special one as she watches from heaven. LETS GO CHAMP!

‘Details are – Azaylia’s day to take place on Friday 21st May 2021. The cortège will be leaving Croft road at approximately 10.00am, making it’s way through the designated route and ending in Avenue Road (by the Pingles) at approximately 10.45am. We request that you stand somewhere suitable at some point during this route.

The announcement comes after Ashley revealed the £1.6 million raised for Azaylia’s cancer treatment will now be used for her funeral and to set up a children’s charity.