Ashley Graham has been at the forefront of the recent body positivity movement as an in-demand model and as an activist.

And her confidence in front of the camera, which led to her being the first plus-size model to be featured in Sports Illustrated ‘s annual Swimsuit Issue, also goes for when she’s pregnant.

On Thursday, she decided to strip down and pose naked in a selfie snap to give her 14.1 million Instagram fans and followers a close-up look at her growing baby bump.

Baby bump! Ashley Graham, 33, gave her 14.1 million Instagram fans a followers an update on her growing baby bum by sharing a selfie snap on Thursday

In the photo, which only showed the bottom half of her head to her waistline, Graham covered her chest with one arm, as she used the other to hold her phone.

Feeling playful, she slightly tilted her head to the side and puckered her lips, all while her burgeoning belly took front and center.

Even though she only showed part of her face, it was still obvious she didn’t wear any makeup, in a move to seemingly keep the theme all natural. 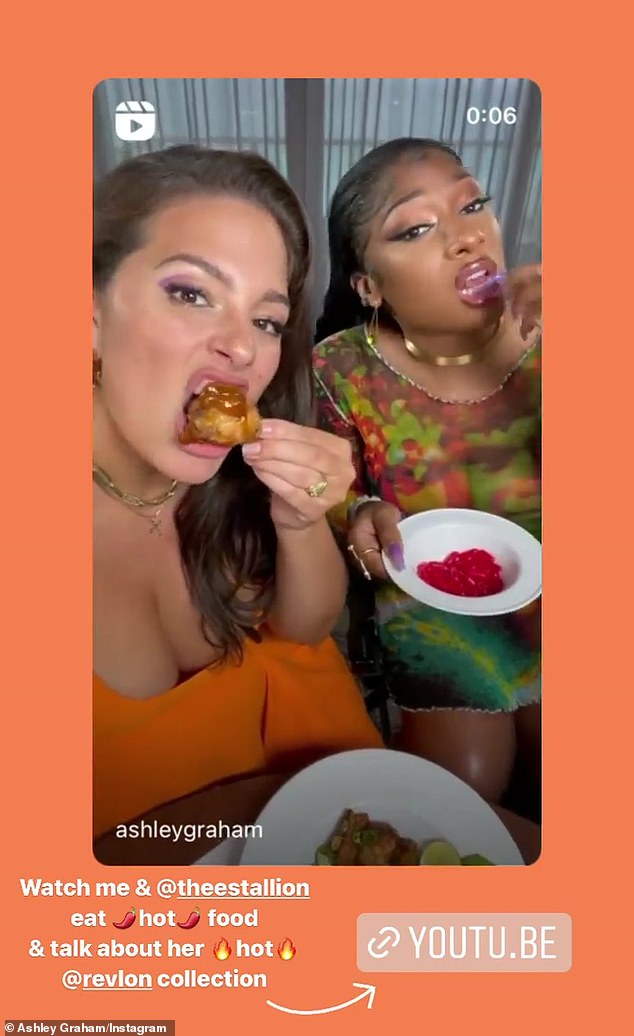 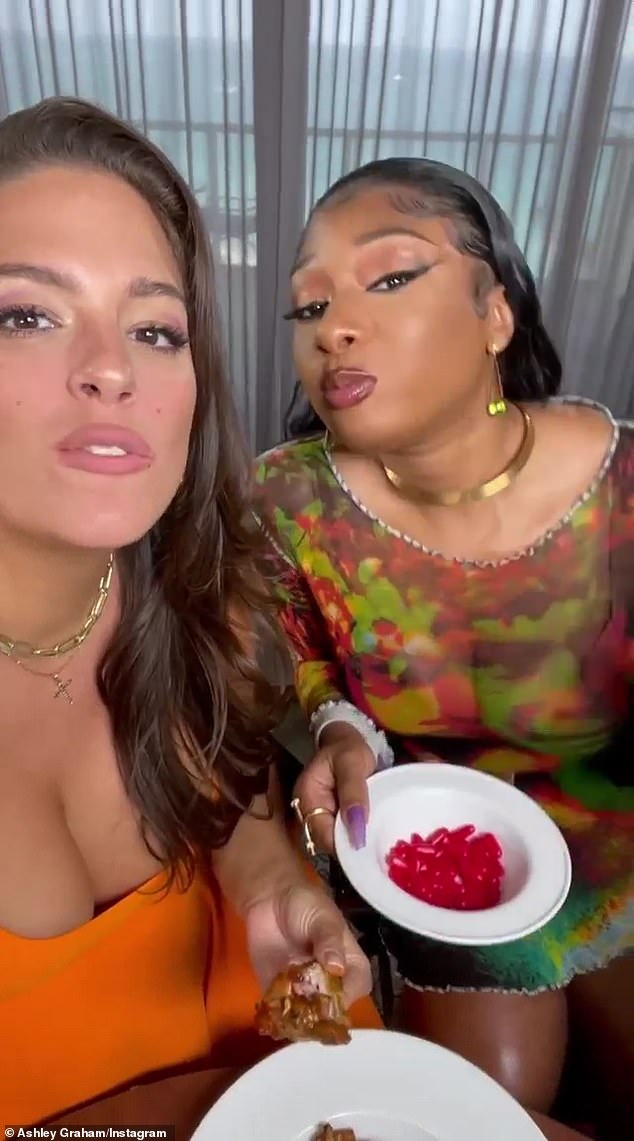 Smokin’ hot: Graham revealed that she ‘got together to eat hot food with the hot girl coach herself’ in the caption of the Instagram video

Graham, 33, announced that she and her husband Justin Ervin were expecting their second child on Instagram on July 13.

‘The past year has been full of tiny surprises, big griefs, familiar beginnings and new stories. i’m just beginning to process and celebrate what this next chapter means for us,’ Graham captioned a maternity photo, shot by Ervin, that showed off her bare baby bump.

Ervin, a videographer, also took to Instagram to confirm the baby news.

‘Felt so nice, we had to do it twice. I’m proud of the amazing mother @ashleygraham is and will be – again!’ he wrote in the caption at the time.

The couple are also the proud parents to their son, Isaac Menelik Giovanni, whom they welcomed in January 2020. 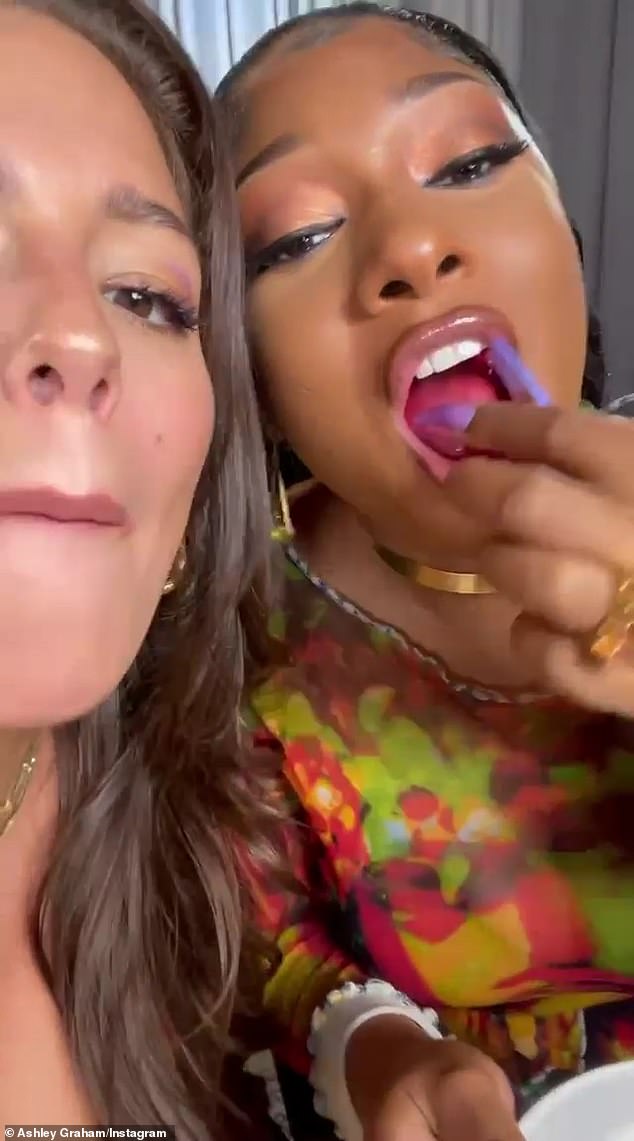 ‘Got together to eat hot food with the hot girl coach herself!! click the link in bio to watch us eat spicy food & talk about @theestallion’s hot @revlon collection!!!’ she shared in the caption. 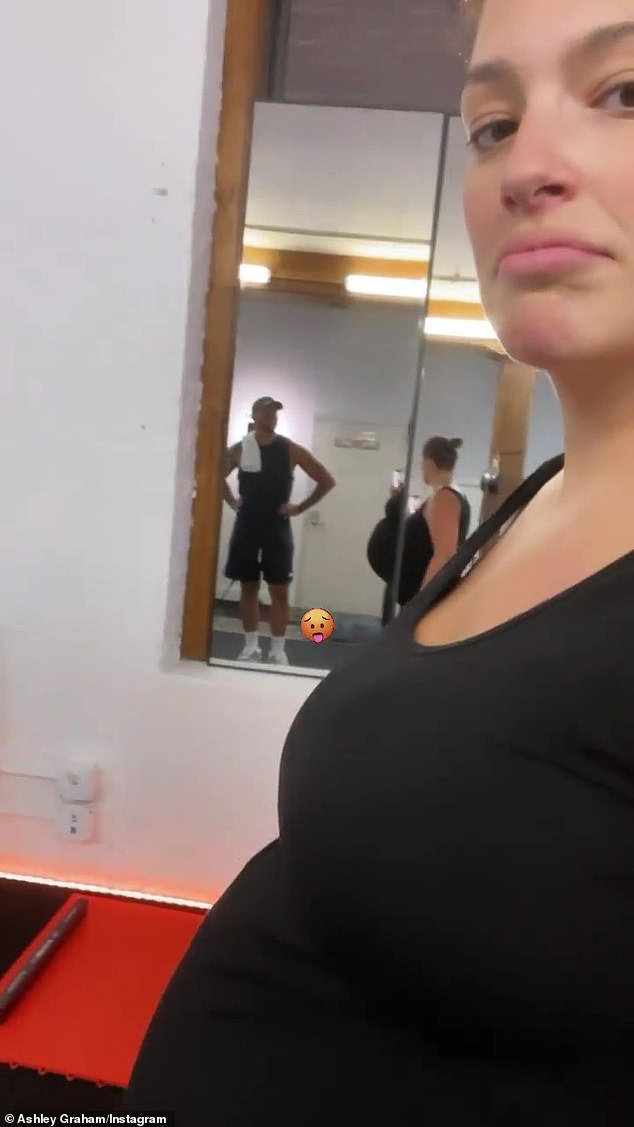 Mirror moves: The Nebraska native also shared a mirror selfie of her baby bump in a tank top 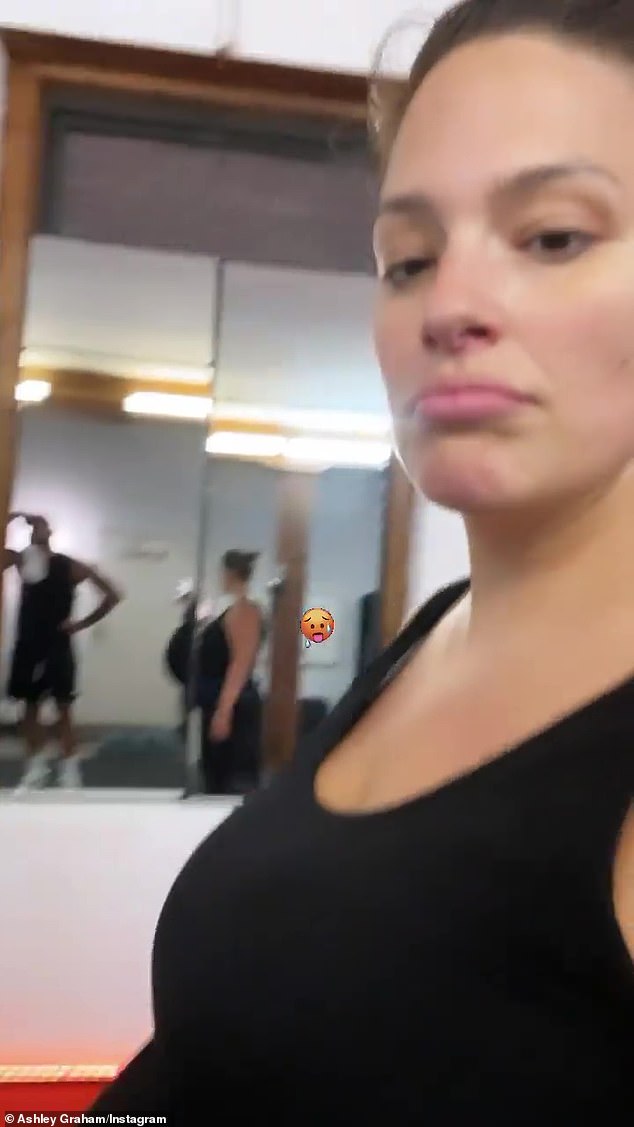 Cheeky: The proud mom, who also has a one-year-old son, got playful with the camera

A couple of hours later, the Nebraska native posted a selfie video of her baby bump; only this time she wore a black tank top matching leggings for the impromptu shoot.

She also shared a photo of herself snuggling up with ‘my girls’, another selfie video where she struck a few poses in a dayglo green tank top.

‘I did my own hair today,’ she declared in the clip, which her friend quickly reminded her that she didn’t style her own hair for that particular photoshoot.

Graham has been credited in helping make curvy ladies more mainstream in the modeling industry. 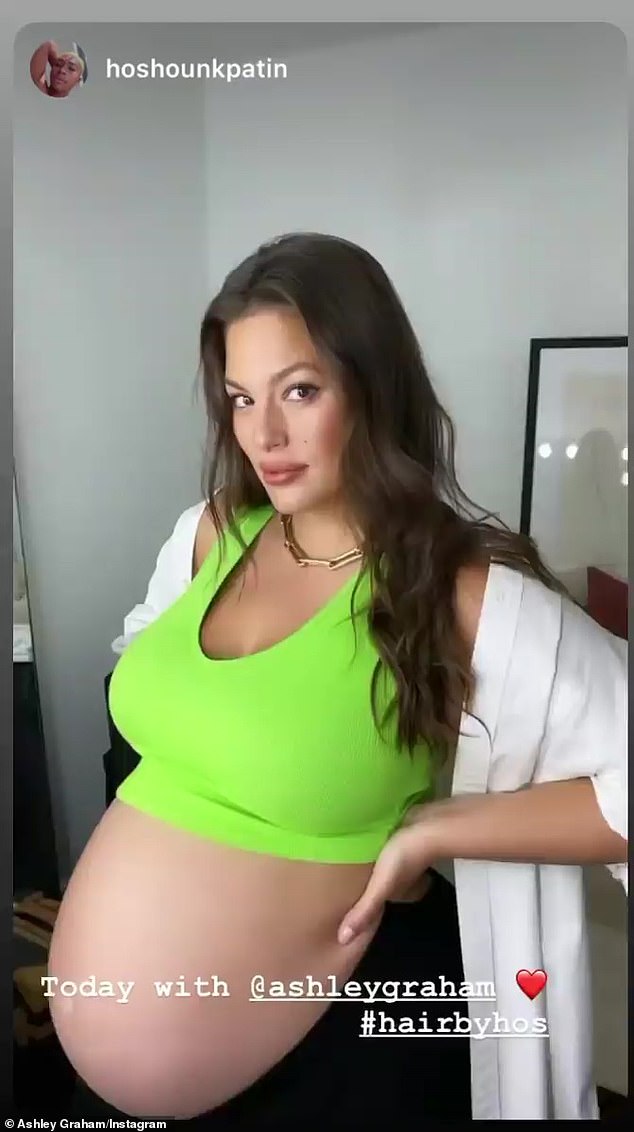 More baby bump images: Earlier on Thursday, the in-demand model also showed off her baby bump in a dayglo green top and leggings 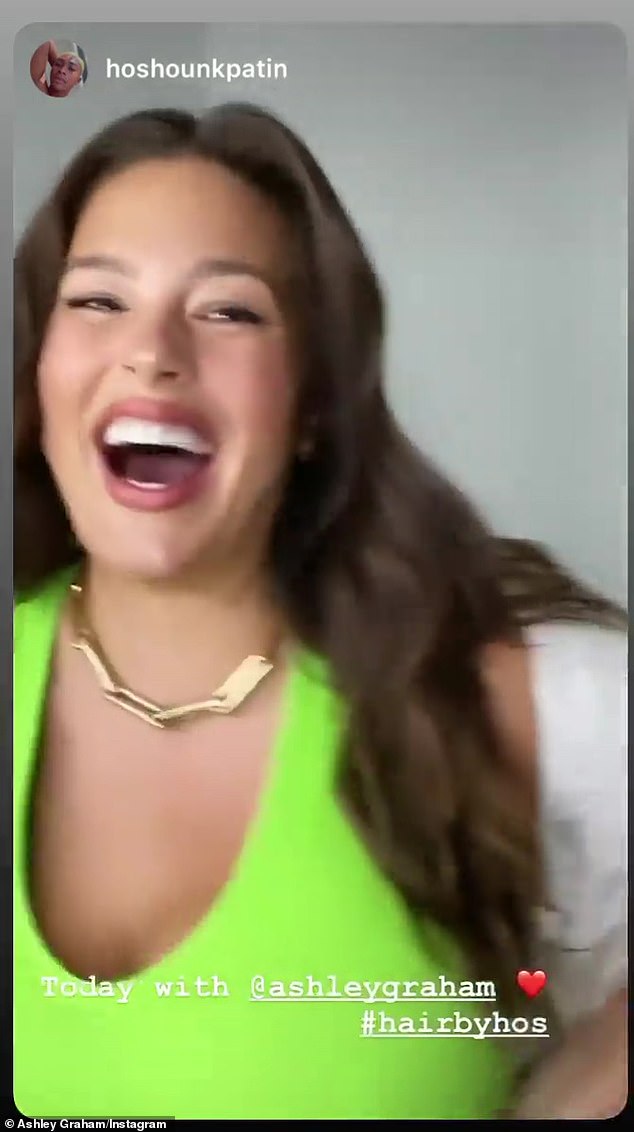 Graham has been giving her 14,1 million Instagram fans and followers updates on her pregnancy by posting abby bump images since revealing the news in July 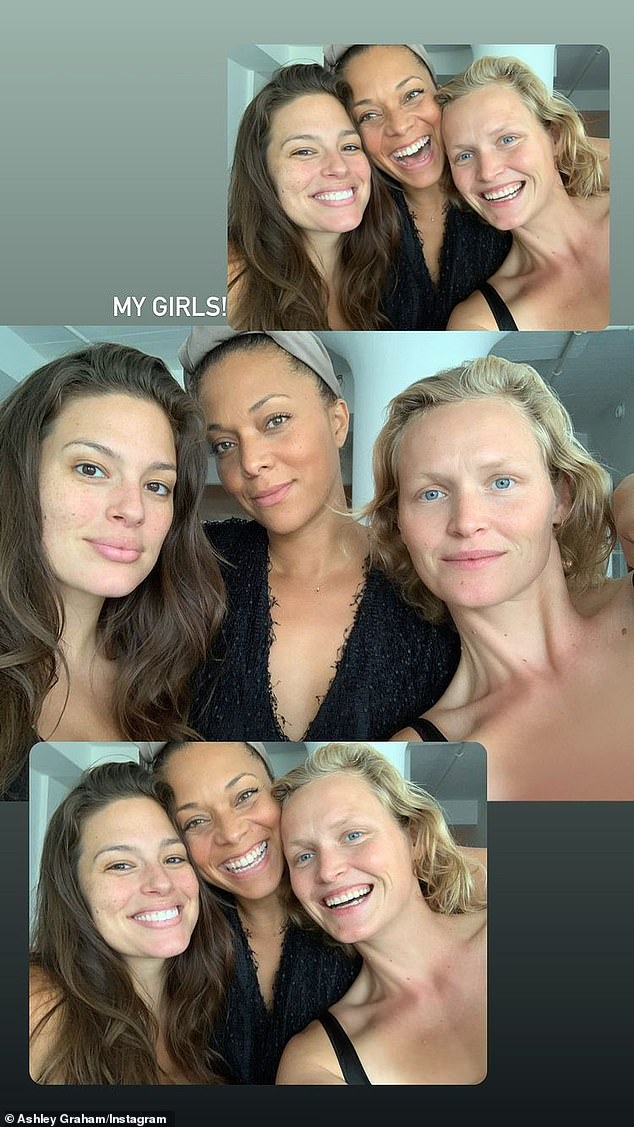