Actress Ashley Judd has hit back at the ‘misogynistic savages’ who insulted her physical appearance in a recent Elizabeth Warren campaign video, revealing that siege migraines have forced her to stop exercising and led to her using Botox as treatment.

In a campaign video for Democratic candidate Elizabeth Warren released on Tuesday in which Judd is shown calling people who donated, the actress was mocked and shamed for her ‘puffy’ face with Twitter users accusing her of using too much Botox.

Judd, 51, shortly afterward admitted to receiving Botox as a treatment for siege migraines which she has suffered from for over a year.

She also claimed her recent weight gain was due to orders from the doctor to forgo any exercise but mild walking as she slammed ‘the patriarchy and all who participate in it’ in an essay posted to Facebook. 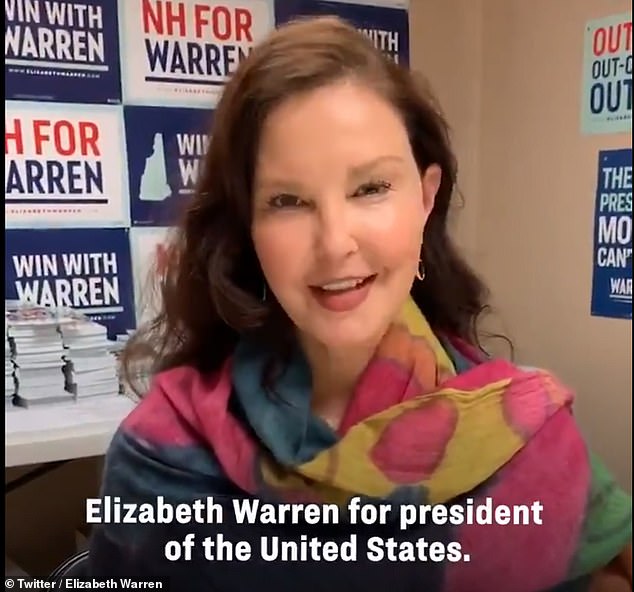 In an essay to Facebook, Judd admitted she is having 31 Botox injections ever twelve weeks as treatment for her siege migraines which can sometimes last for four months at a time

The Warren campaign video was released on Tuesday as the New Hampshire primary was underway and Judd can be seen calling donors to speak further about Warren and her policies.

The ‘Kiss the Girls’ star was instantly criticized for her physical appearance with Twitter users responding to say she was once ‘beautiful’ but is now ‘puffy’.

‘What has the once beautiful Ashley Judd done to herself? Good lord she’s puffy!’ one user wrote, while another said, ‘I’ve heard of plastic surgery, but this puffy-rubber surgery is a new one to me. Yikes.’

‘What the actual f–k happened to Ashley Judd’s face,’ another exclaimed.

‘OMG…@AshleyJudd’s face looks like she used bee stings instead of botox and fillers. Or like someone who’s allergic to nuts and chocolate but still could not resist that Snickers bar,’ the abuse continued.

Among the critics appeared to be ‘Superman’ actor Dean Cain who reposted the video writing, ‘I’m not exactly sure what to say here … I certainly have nothing positive to say, so I’ll be quiet’.

Judd responded to the criticism of her appearance on Thursday night, penning an essay about the ‘misogynistic hullabaloo’ on Facebook and sharing it across social media.

‘Some of my reflections concerning the misogynistic hullabaloo that has recently swirled around me,’ she wrote on Twitter.

In her essay, Judd described the hateful messages as a ‘gendered way to distract from my political speech’, explaining the medical situation that caused her ‘puffy’ appearance and admitting it involved Botox.

‘What I know is that I have been sick with siege migraines for over a year, and that migraine affects one in four households in the US. It’s the third most common disease in the world,’ she writes, adding that she receives 31 injections of Botox every twelve weeks for the ailment.

‘Have I had botox? It is a standard treatment for the ailment that I experience. My union insurance pays for thirty-one injections every twelve weeks,’ she admits.

‘Earlier this year, my neurologist pain specialist banned me from anything but mild walking exercise. My last siege migraine lasted a grueling four and a half months. Along with medication, and the inevitable laziness that gathers around forced inertia, I have experienced some un-fun weight gain.’

She has previously spoken out about critics of her appearance after an experience of her body changing on steroids, featuring in a TED talk in which she claimed that both men and women take part in the patriarchy with their complaints about women who don’t fit into mainstream beauty standards. 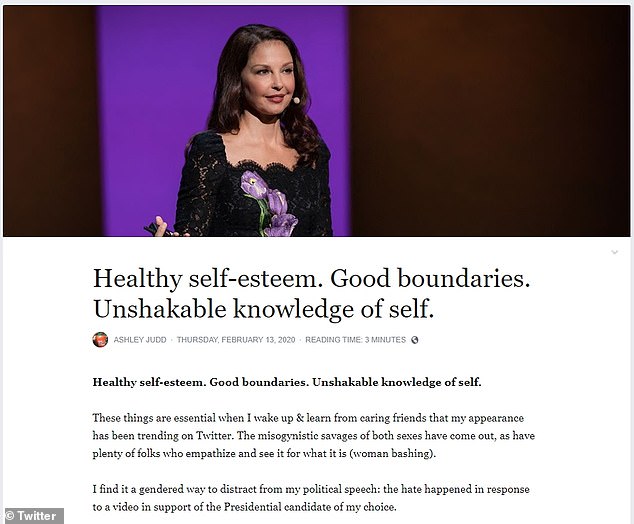 Judd reiterated these opinions in her Facebook essay saying that ‘the misogynistic savages of both sexes have come out’ to engage in ‘woman bashing’.

‘What I know is that misogynists on Twitter have been slaughtering me compared to my pre-weight gain idealized self. My conventionally thin, athletic, “pretty” AcroYoga body, and more slender face, is merely the flip side of the same patriarchal coin,’ she continued.

‘Those of you who are talking about my female appearance, making assessments about my worth and desirability are basing your opinions on wholly gendered norms. The good news for my empowered self is I don’t take compliments any more seriously than I do slurs.’

Judd has admitted to taking steroids for a medical condition as far back as 2012 and other users pointed out that the prescription pills can lead to swelling such as the actress appears to be experiencing.

While Judd cleared up what actually caused the swelling on Thursday, in response to the insults, prescription steroid users had previously begun sharing their own inspiring stories, as well as photos of themselves looking more swollen as a result of the drugs.

The common prescription steroid ‘prednisone’ began to trend alongside ‘Ashley Judd’ as more and more people joined in the inspiring movement.

‘Ashley I’m no fan of @ewarren or the Democrat party but I just want you to know you’re beautiful. My son is on prednisone for autoimmune hepatitis and he had the same side effects. It’s temporary and those saying negative things are complete scum,’ one response read. 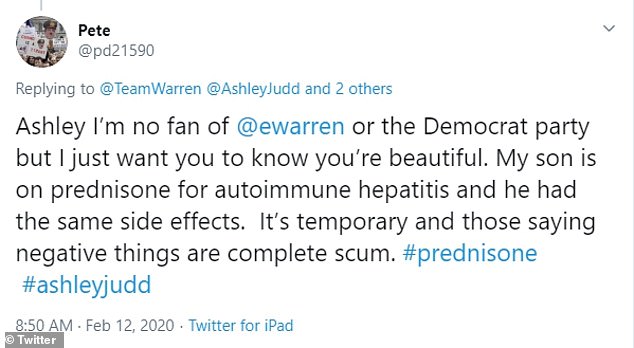 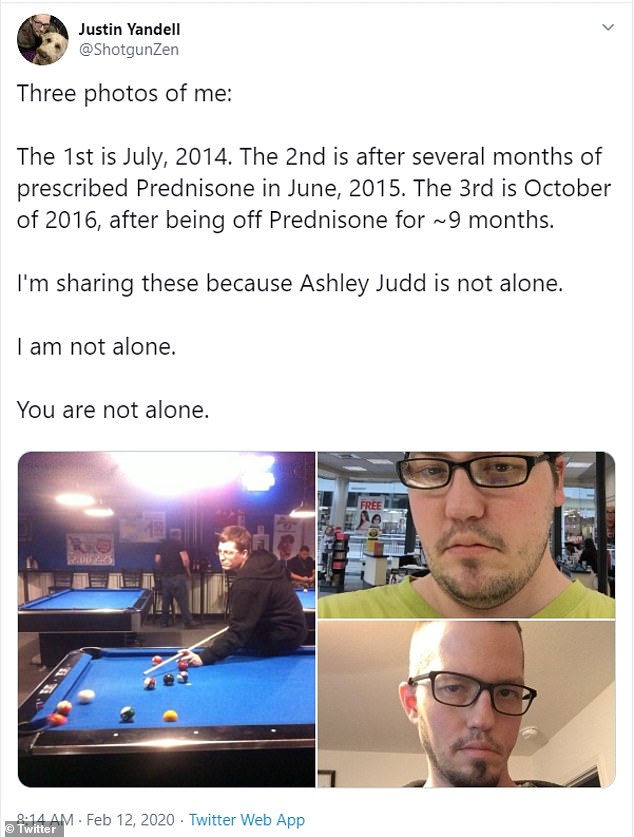 ‘So, disappointingly, #Prednisone is trending b/c people are making s—-y comments about Ashley Judd’s appearance. I know that prednisone can certainly cause swelling but I honestly don’t even see it on Ashley Judd. Her face looks better than mine on my best day, by far.’

‘Everybody mocking Ashley Judd right now is ableist trash… People like you are the reason why everyone felt comfortable bullying me as a disabled kid who regularly took #prednisone to keep my chronic illness at bay,’ said one steroid user.

‘I saw that #prednisone was trending and I stand with Ashley Judd. I’m on 60 tablets a day, for my kidney disease and the side effects are so awful. while my face hasn’t swollen up..yet, I’m angry , anxious and sad all the time and I’ve got a horrible rash,’ shared another.

They also shared photos, one prescription steroid user saying: ‘Three photos of me: The 1st is July, 2014. The 2nd is after several months of prescribed Prednisone in June, 2015. The 3rd is October of 2016, after being off Prednisone for ~9 months. I’m sharing these because Ashley Judd is not alone. I am not alone. You are not alone.’

According to Reuters, 2.5 million Americans take prescription steroids, which are often used to treat inflammatory diseases such as arthritis. The drugs come with side effects including fluid retention, high blood pressure, thinning bones and vision problems.

In 2017, Predisone was the 22nd most prescribed drug in America.