Ashley Roberts looked incredible when she was pictured leaving the Heart radio studios in London on Tuesday.

The former Pussycat Doll, 40, turned heads in a camel suede coat and 90’s inspired white leather boots as she walked through Leicester Square.

Heading home from work, she layered her coat over a long nude Karen Millen dress with gold detail to match her jewellery.

Stylish: Ashley Roberts, 40, showcased her sensational style in a camel coat as she left work at Heart FM radio in London on Tuesday

To go with her sensational River Island boots she went for a white crocodile skin handbag.

The radio presenter wore her blonde locks slicks back in a ponytail and opted for white framed sunglasses.

Ashley strutted her stuff in a video she posted to her Instagram story on Tuesday. In the next snap she used a filter and tagged her outfit details for her eager followers. 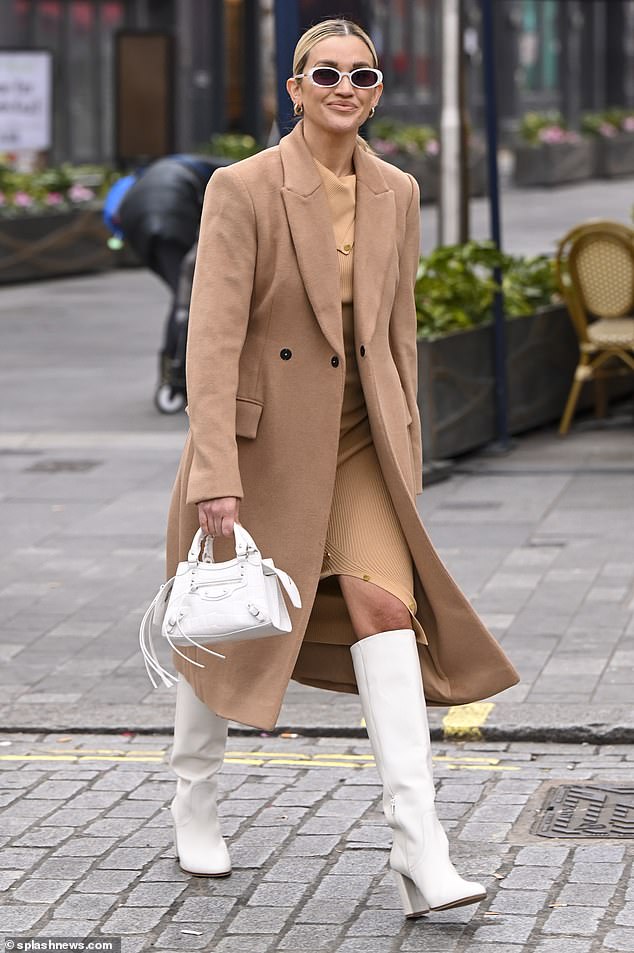 Chic: The former Pussycat Doll layered her coat over a long nude Karen Millen dress with gold detail to match her jewellery

After arriving at Global radio studios this morning, Ashley met up with her co-host Amanda Holden, 50, who wowed in a red dress.

She took to Instagram and posted a photo of the two during their Heart FM breakfast show. She captioned it: ‘Morning hunni’s from @thisisheart’ 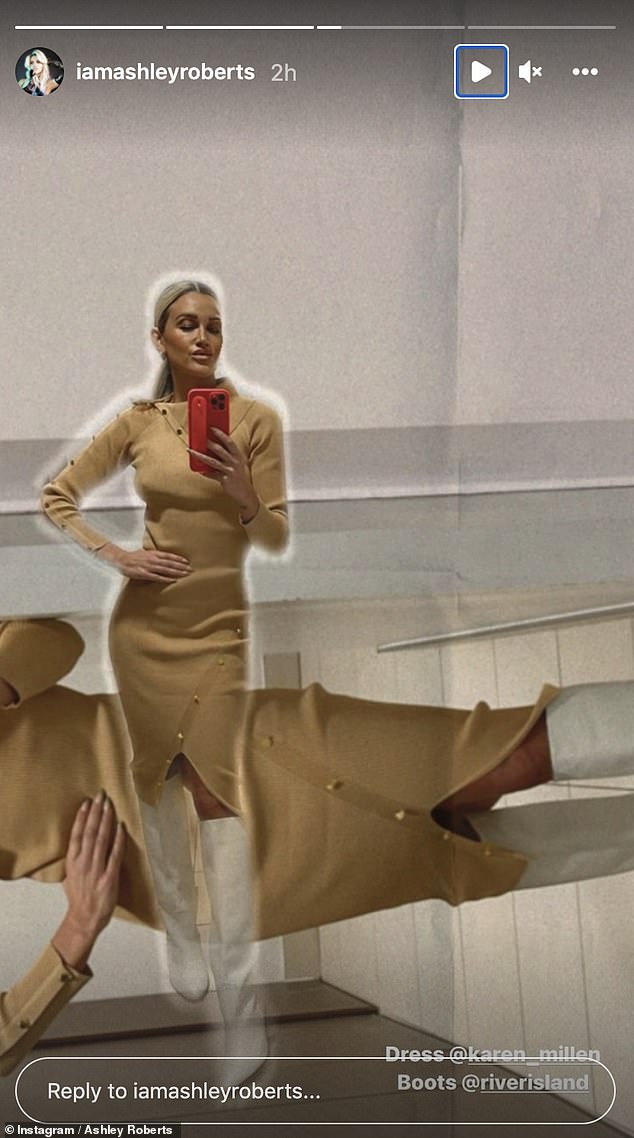 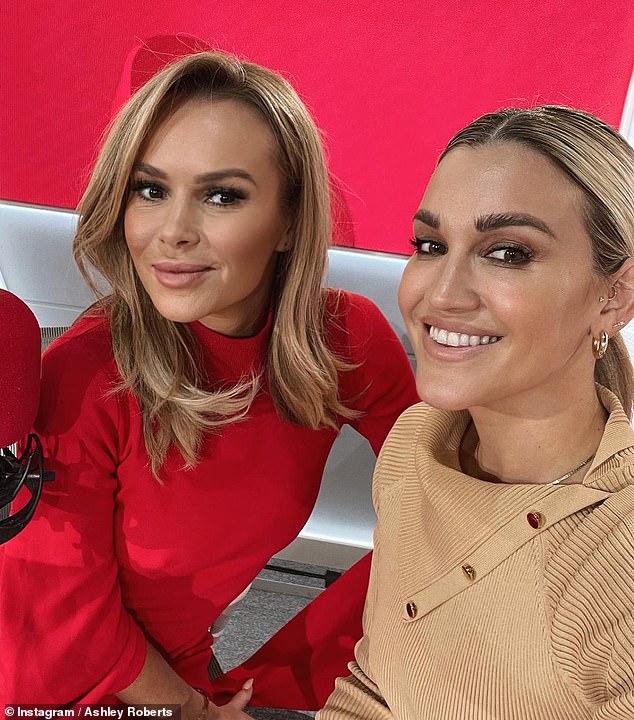 Work fun! The radio presenters Ashley and Amanda Holden, 50, posed for a picture during their show on Tuesday

Fellow Pussycat Dolls Carmit Bachar and Jessica Sutta claimed they were not told about the cancellation of their reunion tour.

The singers, 47, and 39 respectively, shared a joint statement on Saturday in which they said they only found out after seeing bandmate Nicole Scherzinger’s Instagram post about the cancellation.

On Friday night, Nicole, 43, said their planned tour dates wouldn’t go ahead due to the ‘ever-evolving circumstances surrounding the pandemic’. 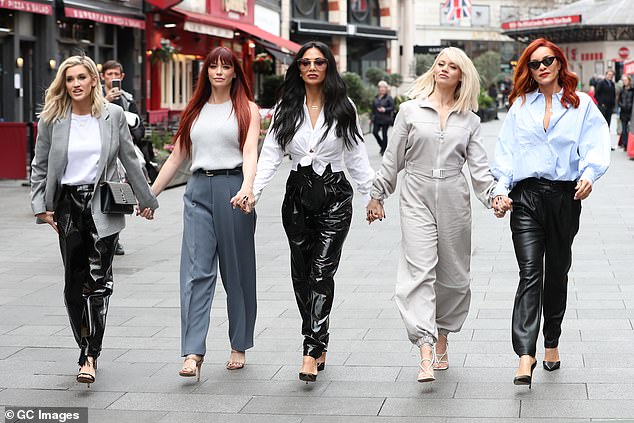 Bad news: The Pussycat Doll’s reunion tour was cancelled due to the coronavirus pandemic

Jessica and Carmit have now hit out in a statement that reads: ‘We want to say how incredibly disappointed we are to learn of an announcement made on Instagram that the Pussycat Dolls reunion tour is canceled…

‘As of now, there has been no official notification of that.

‘Either way, it seems as though it’s the end of a chapter to an incredible, life altering experience filled with some awesome memories that we will forever be grateful for.

‘To the fans, we love you. Trust us, this is not the outcome we had hoped for. We wanted it as much as you because we appreciate you all so much and it hurts our hearts you had to wait so long for an answer, but unfortunately it’s out of our control.’

They continued: ‘We all had big dreams for this band to expand especially creating the music so all our voices could be heard, which would be true female empowerment. Thank you to all the fans that supported us unconditionally and love us to no end.’

‘We will always honour the essence of what the true definition of being a true Pussycat Doll is. This tour may have come to an end but it is not the end of the Dolls story. We created a sisterhood that will live on.’

MailOnline contacted a representative for the band for comment. 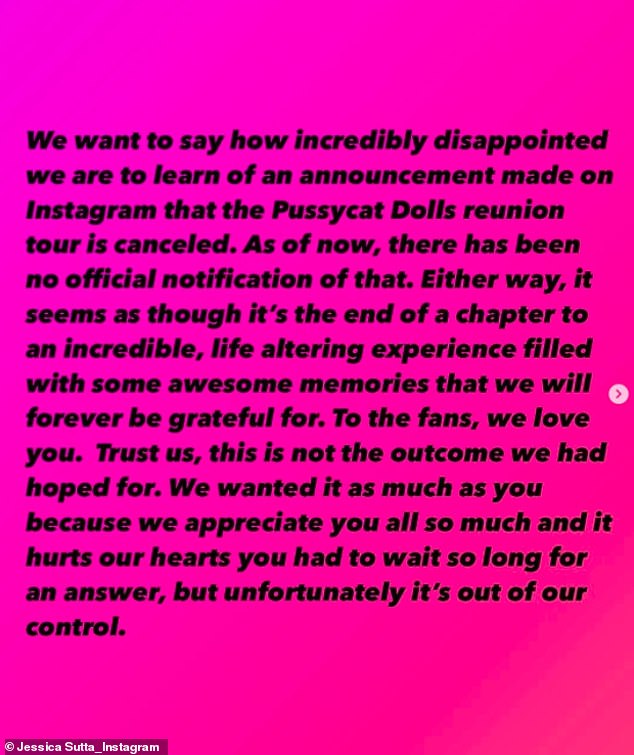 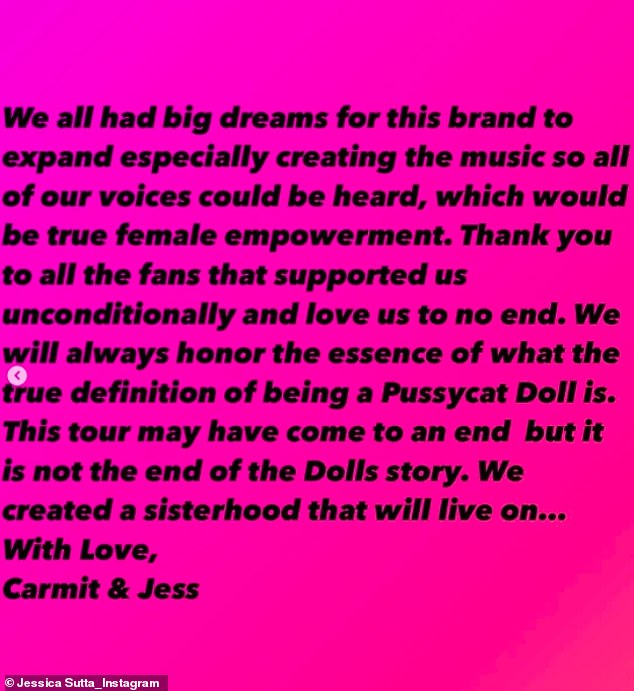 Upset: They wrote in the statement: ‘To the fans, we love you. Trust us, this is not the outcome we had hoped for’