Manchester United captain Ashley Young subjected to vile racist abuse on social media after failing to deal with Lionel Messi in defeat by Barcelona, as Kick It Out calls on Twitter to take ‘serious action’

Manchester United captain Ashley Young was the subject of racist abuse online after Tuesday’s Champions League exit at the hands of Barcelona – with Kick It Out calling on Twitter to finally take action on ‘rampant discrimination’ online.

Football’s equality charity questioned when Twitter will sort out the problems on their platform after Young became the latest in a series of players to be abused.

Tweets referring to Young as an ‘ape’ and using the ‘n’-word were flagged up by Kick It Out after the 33-year-old endured a disappointing night at the Nou Camp as United suffered a 3-0 defeat, exiting the competition 4-0 on aggregate.

One Twitter user called on Young to ‘retire young you f***ing n*****’ and others referred to the player as a ‘monkey’ and an ‘ape’.

It is the latest in a spate of incidents where black footballers at English clubs have been racially abused, and Kick It Out accused Twitter of not doing enough to combat the problem on their platform.

In a statement, Kick It Out said: ‘Yet another black player, this time Ashley Young, targeted with racist abuse on social media after tonight’s Champions League game.

‘Again, we’re left asking Twitter the same question – when will you take serious action to tackle the rampant discrimination on your platform?’ 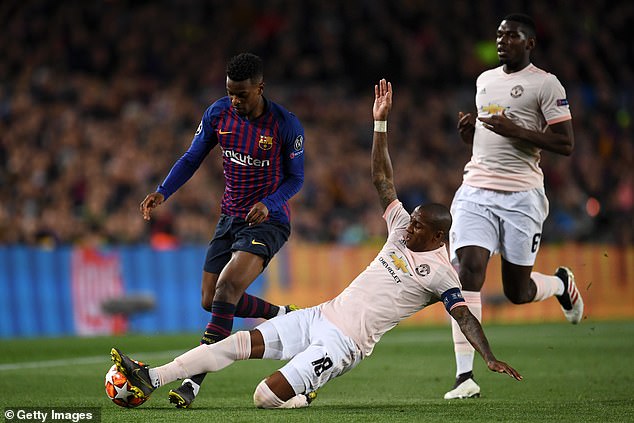 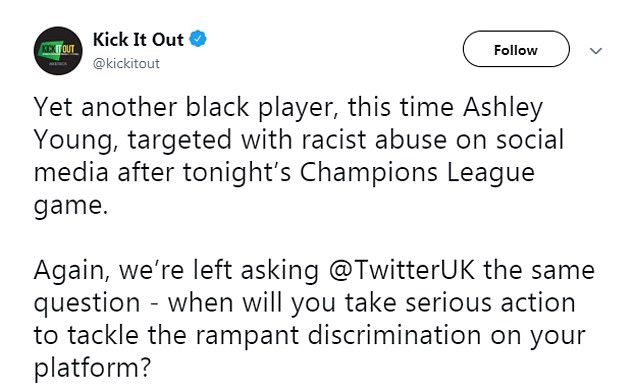 A racist chant from Chelsea fans targeted at Salah was posted online before their Europa League game away to Slavia Prague last Thursday.

Sterling was subjected to racist abuse while playing for England away to Montenegro in a Euro 2020 qualifier, while team mate Danny Rose said he ‘can’t wait’ to retire from playing due to discrimination.

Arsenal are currently investigating after another online video showing racist abuse, from a supporter directed at Napoli defender Koulibaly.

Elsewhere, a Tottenham fan who threw a banana skin at Arsenal’s Pierre-Emerick Aubameyang was banned for four years and fined.

March – Montenegro charged by UEFA after England players, including Danny Rose and Callum Hudson-Odoi, were subjected to racist abuse.

After Liverpool winger Salah, a Muslim, scored against Southampton, one Twitter user said, in reference to the Islamic belief you should not eat pork, he would ‘force feed the c*** bacon’