Equipment rental firm Ashtead has lifted its expectations for the full year after reporting a ‘record’ performance in its first half as the firm continues to benefit from an economic rebound from the pandemic.

Shares in the FTSE 100 group, which is often a staple of UK investment funds and pension portfolios, rose 3.5 per cent to £64.12 this afternoon as it also hiked its interim dividend.

Ashtead shares have almost doubled over the past year, and it has been the biggest investment winner of the past decade among stocks listed on the main market of the London Stock Exchange, with a whopping rise of almost 4,000 per cent.

A diverse business: Ashtead rents out cones and diggers

The supplier of traffic cones, construction equipment and tools such as diggers said group rental revenues jumped 20 per cent to $3.5billion, or £2.6billion, in the six months to the end of October.

That helped lift overall revenue by 18 per cent to $3.9bilion and adjusted pre-tax profit by 42 per cent to $979million.

Apart from renting out cranes and other equipment, Ashtead also caters to other markets, such as repair work from hurricanes, which brought in $60million to $65million in revenue in the second quarter alone.

In the UK, where it has been helping to build regional Covid-19 testing centres, providing tens of thousands of traffic cones, many miles of fencing and oodles of lights and generators, total revenues rose 35 per cent to £368million, aided by an 18 per cent rise in rentals.

Currently supporting around 500 UK Covid testing centres, Ashtead said they expected this work to continue through the winter before reducing ‘significantly’ in Spring next year.

At the moment, cash coming in from the Department of Health accounts for around a third of total UK revenues, it added.

In the US, its key market, rental-only revenue was 16 per cent higher at $2.3billion.

While growth has been driven by higher volumes of equipment out on loan, rates have also been going up – with Ashtead hailing ‘a better rate environment than we have seen for a number of years’. 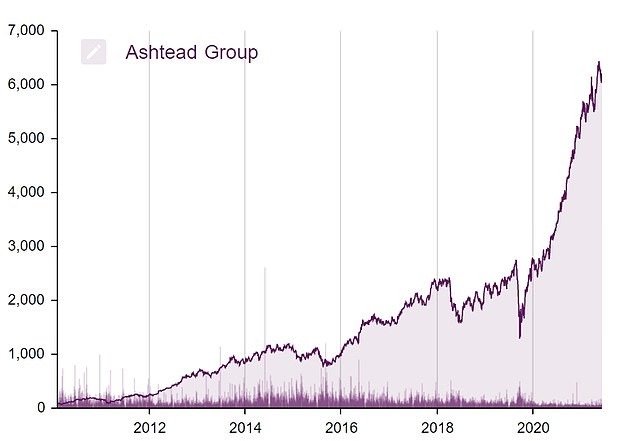 Ashtead has been the biggest investment winner of the past decade among stocks listed on the main market, with a whopping rise of almost 4,000% 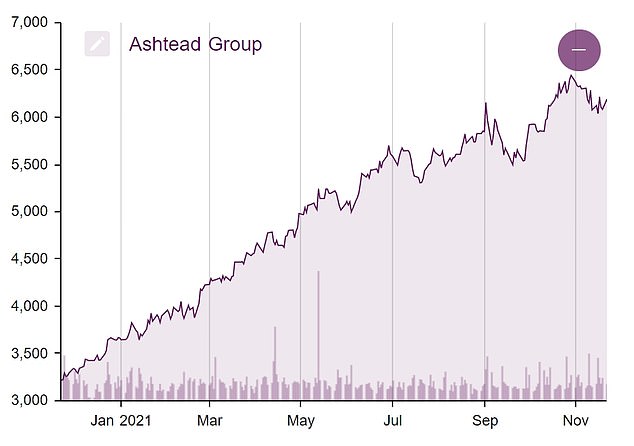 In the last year alone, Ashtead shares have almost doubled

On the back of the strong performance, Ashtead proposed an interim dividend of 12.5 cents, up 28 per cent.

Last year, the company handed out $213million in dividends to shareholders after declaring a final dividend of 48.24 cents.

Ashtead’s chief executive, Brendan Horgan, said: ‘Notwithstanding the volatility that continues to arise from Covid, the fundamentals of our business are strong and we now expect full year performance to be ahead of our previous expectations.’

Russ Mould, investment director at AJ Bell, labelled Ashead as ‘a beast of a business’.

‘For years it has talked about a structural shift in the market from companies and individuals preferring to rent equipment rather than own it outright, and that trend is still in motion,’ he said.

‘It has successfully reinvested large chunks of its profit back into the business, buying more equipment to amplify future returns. Shareholders have also been rewarded with a steady stream of dividends.’

But while Ashtead is set to benefit from Joe Biden’s $1.2trillion infrastructure bill, Covid remains a challenge for the group.

‘Any prolonged setbacks to economic activity could have a negative knock-on effect to construction activity, causing project delays,’ Mould added.