Asia Argento was spotted taking a swim in Rome with her new martial arts champion boyfriend just days after her new book revealed she texted her ex, Anothony Bourdain, to ‘stop busting my balls’ the night before his suicide.

Argento, 47, was seen walking up to the pool in a peach-colored one piece hand-in-hand with her new squeeze, Michele Martignoni, 26, a Roman MMA fighter, sporting checker-patterned trunks.

The Italian actress definitely stood out with all her exposed tattoos, and the couple was pictured sharing smooches throughout the entire outing.

The couple was then spotted grabbing drinks at a bar, with Argento wearing a shirt that read: ‘Here is no limit to what we as women can accomplish,’ as she walked out with torn-up jean shorts and boots. Martignoni wore a black t-shirt and white pants.

The trip comes just as Argento hit back against claims made about her in a unauthorized biography of Bourdain that details her tumultuous relationship with the celebrity in his final days.

Asia Argento (right), 47, was spotted at a pool in Rome with her new MMA fighter boyfriend Michele Martignoni, 26 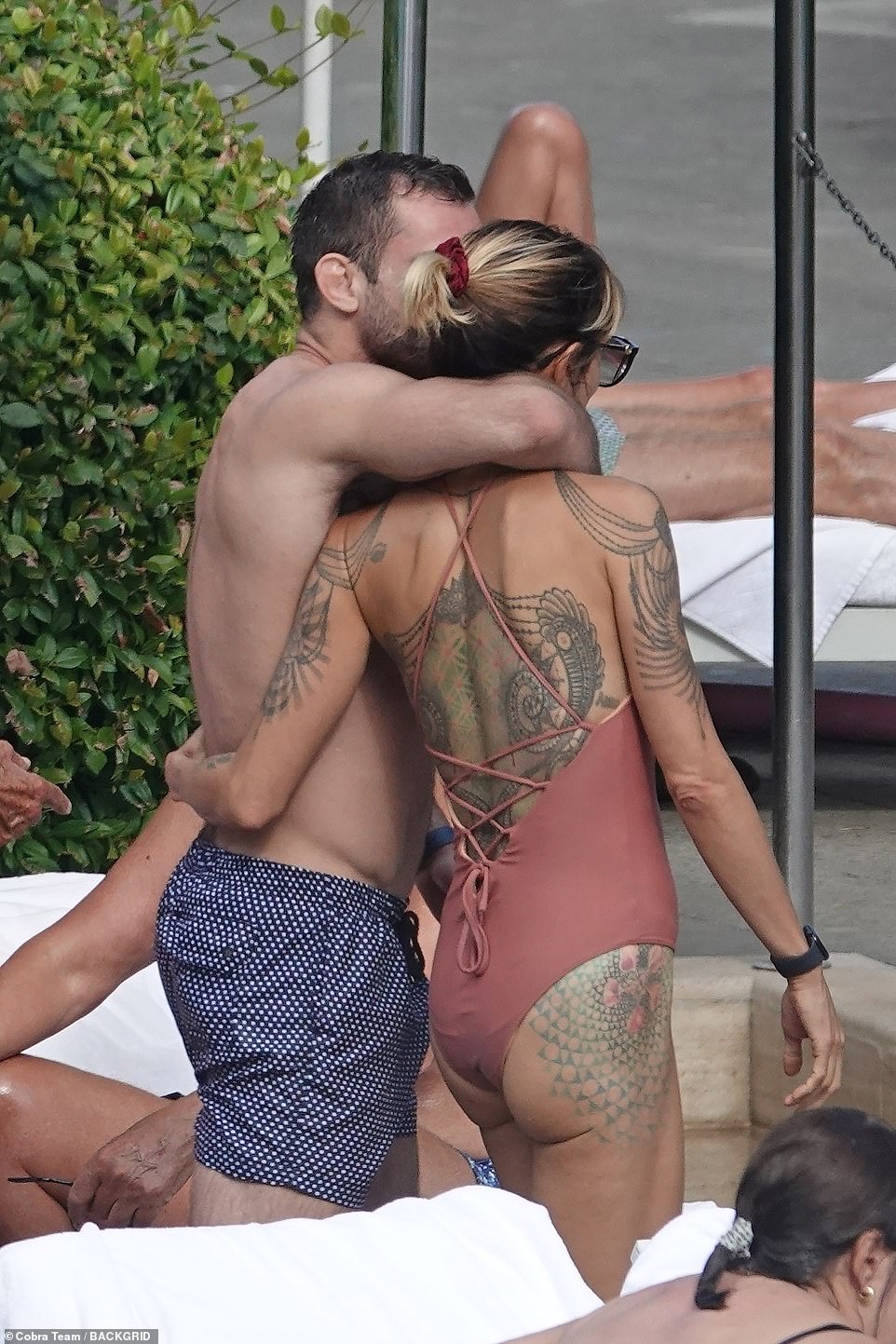 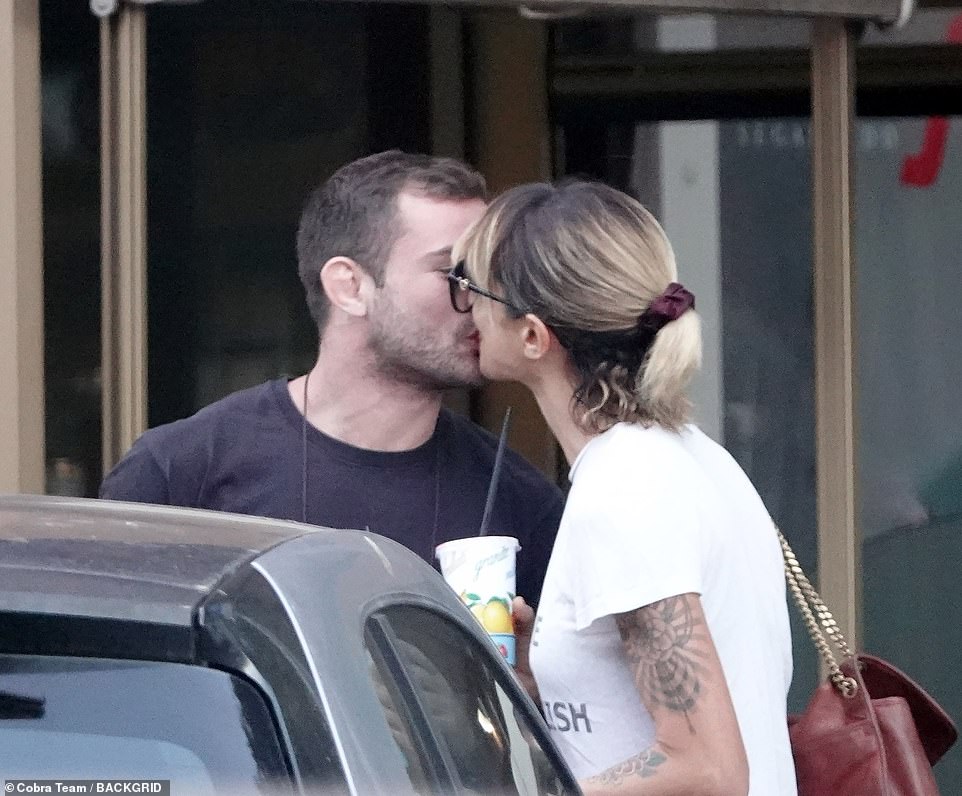 Even after getting out of the pool, the Italian celebrity couple continued to make out as they enjoyed their weekend 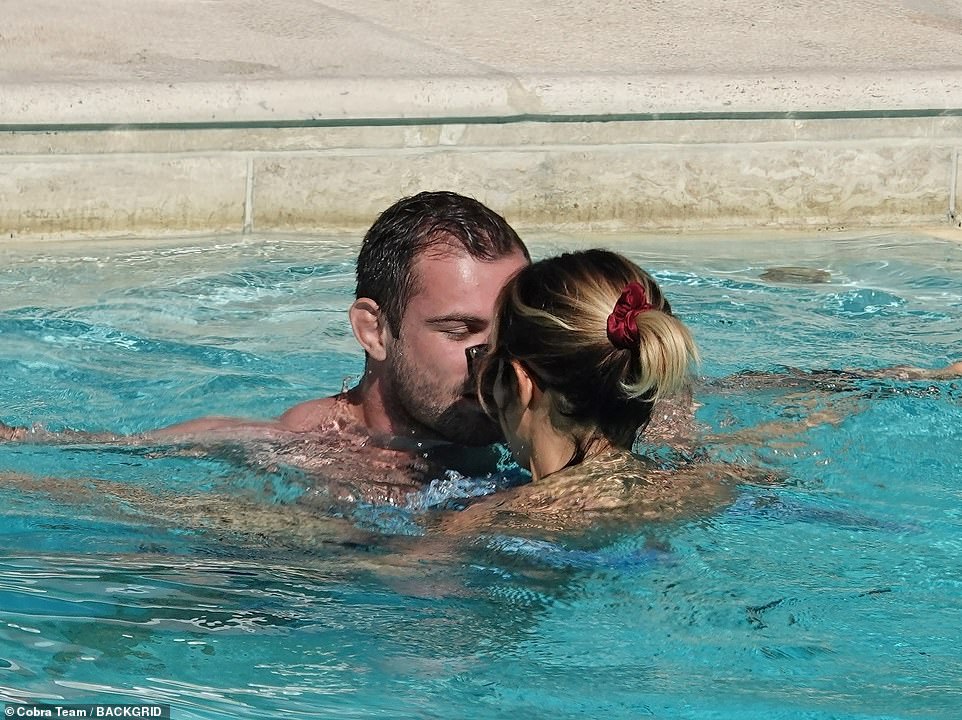 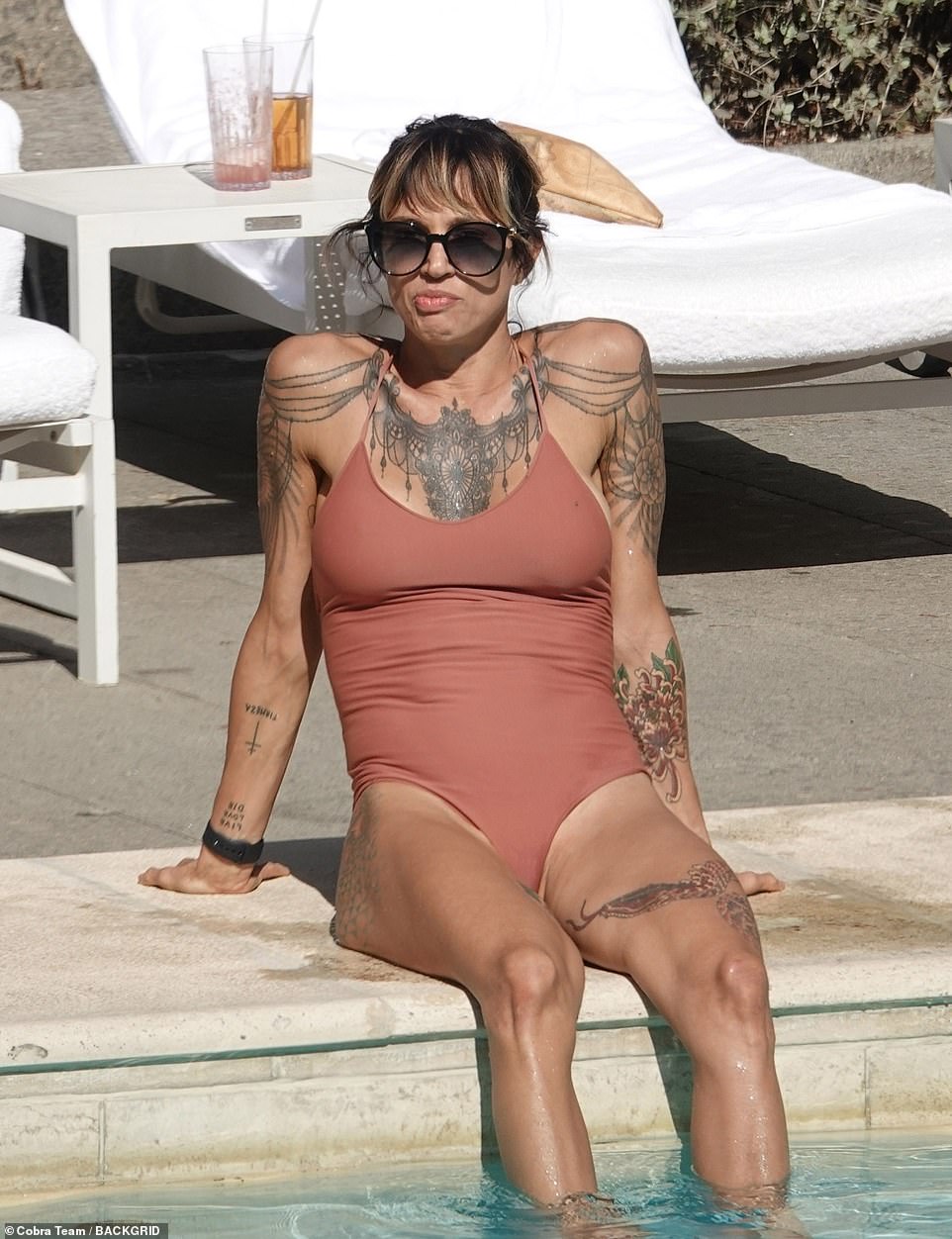 The Italian actress was seen sporting a peach one-piece swimsuit, with her many tattoos on display 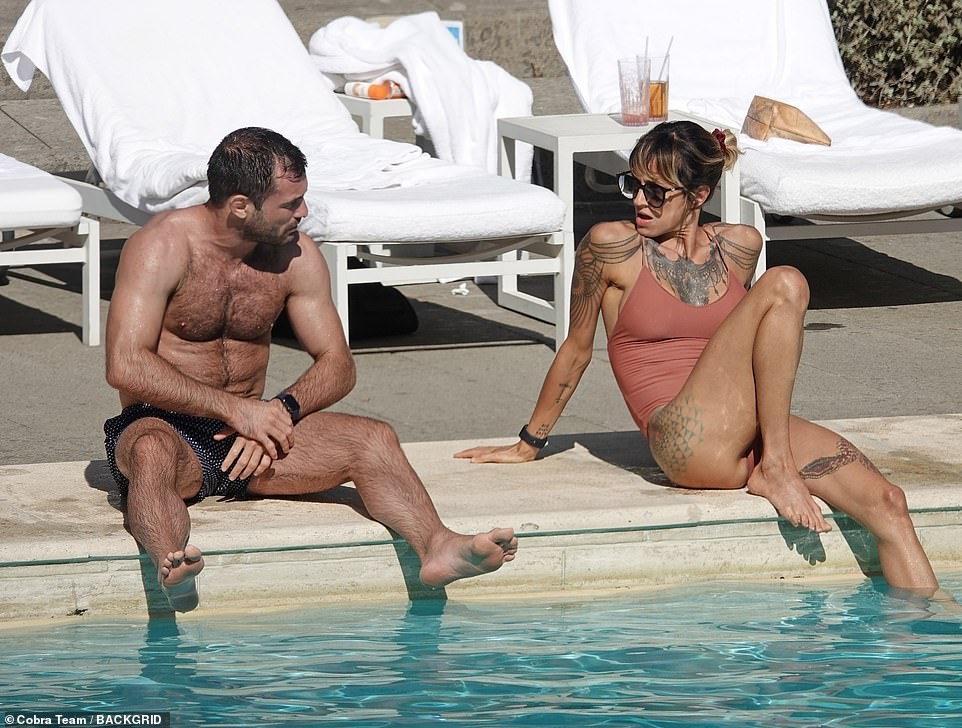 Pictured: The couple enjoying a chat while sitting poolside in their native Rome. Martignoni was seen sporting checker-patterned trunks as he remained by his new girlfriend’s side 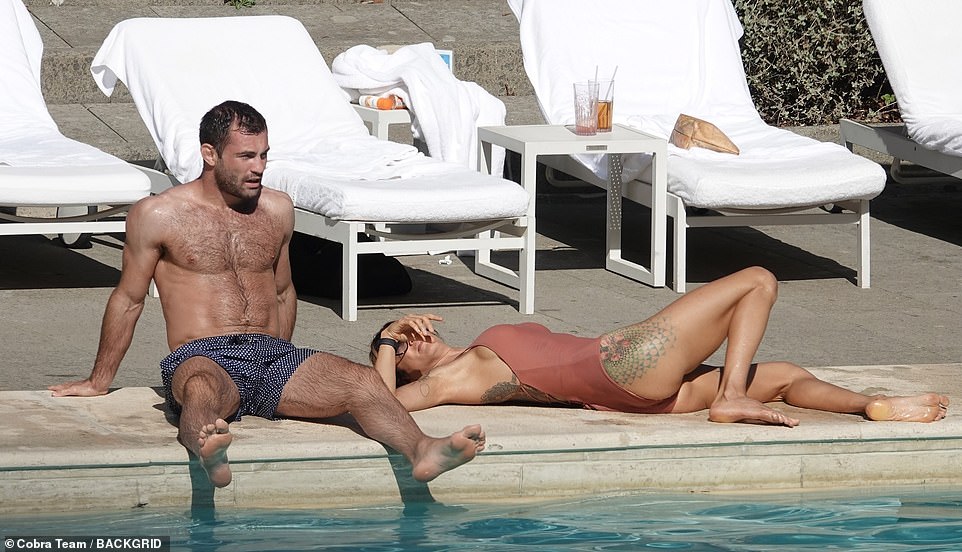 It served as a moment of respite for Argento, who is facing scrutiny over allegations made about her relationship with the late Anothony Bourdain in the days leading up to his 2018 suicide

Argento posted an image to one of her Instagram stories of her wearing a T-shirt of former professional bodybuilder Ronnie Coleman with the phrase ‘Stop Busting My Balls’ superimposed.

The night before Bourdain committed suicide, Argento sent him that message during their final text exchange, according to Charles Leershen’s book, ‘Down and Out in Paradise.’

Bourdain asked: ‘Is there anything I can do?’

She replied: ‘Stop busting my balls’.

He responded: ‘OK,’ and killed himself hours later.

Bourdain’s family and Argento have already challenged the book, accusing Leershen of multiple inaccuracies. Publisher Simon & Schuster is standing by it. 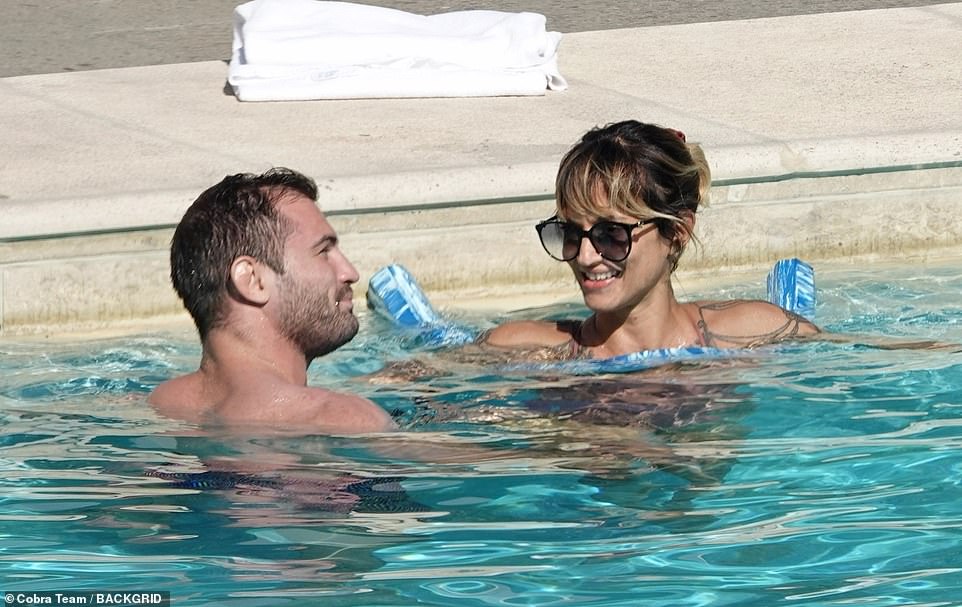 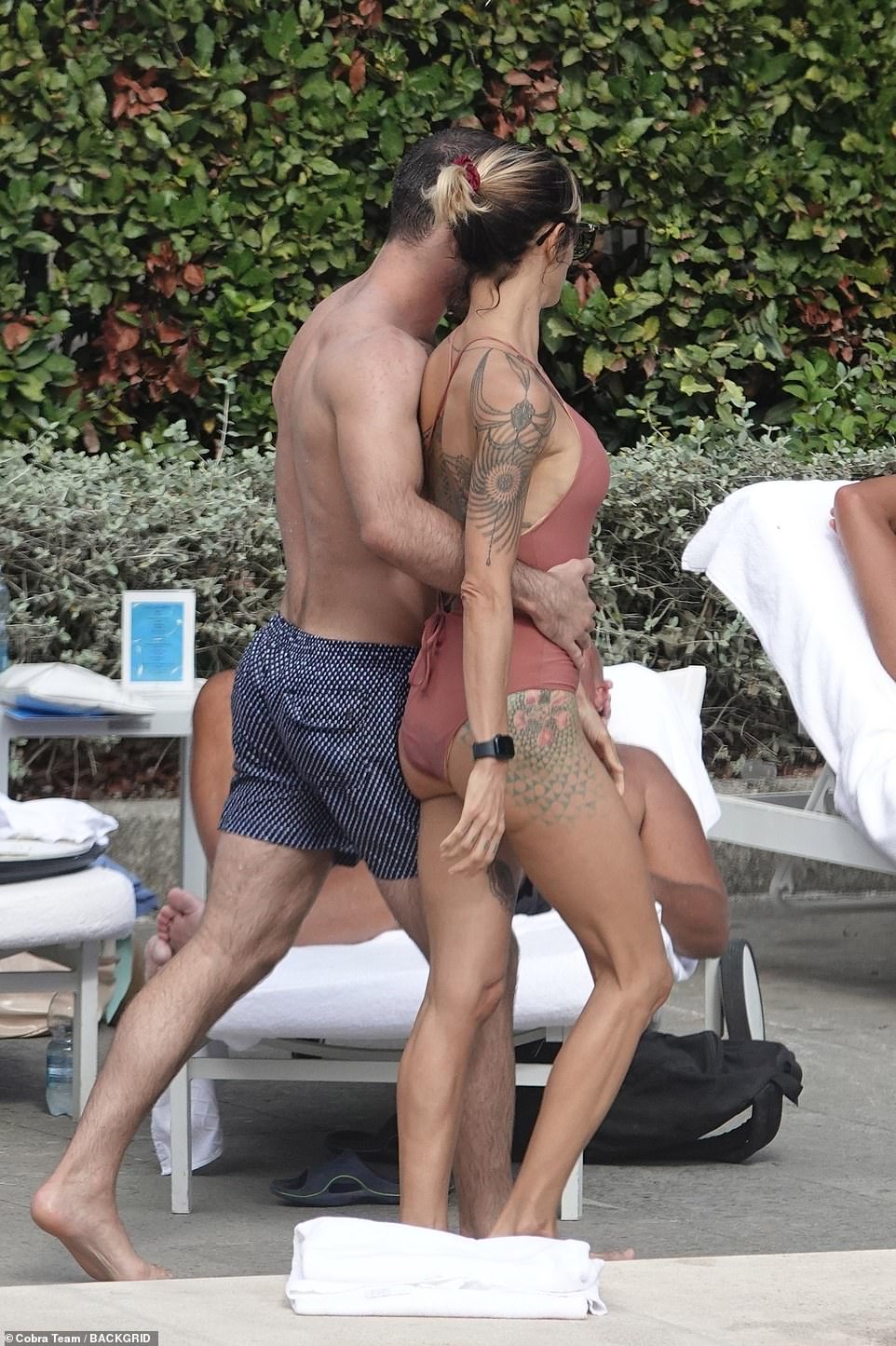 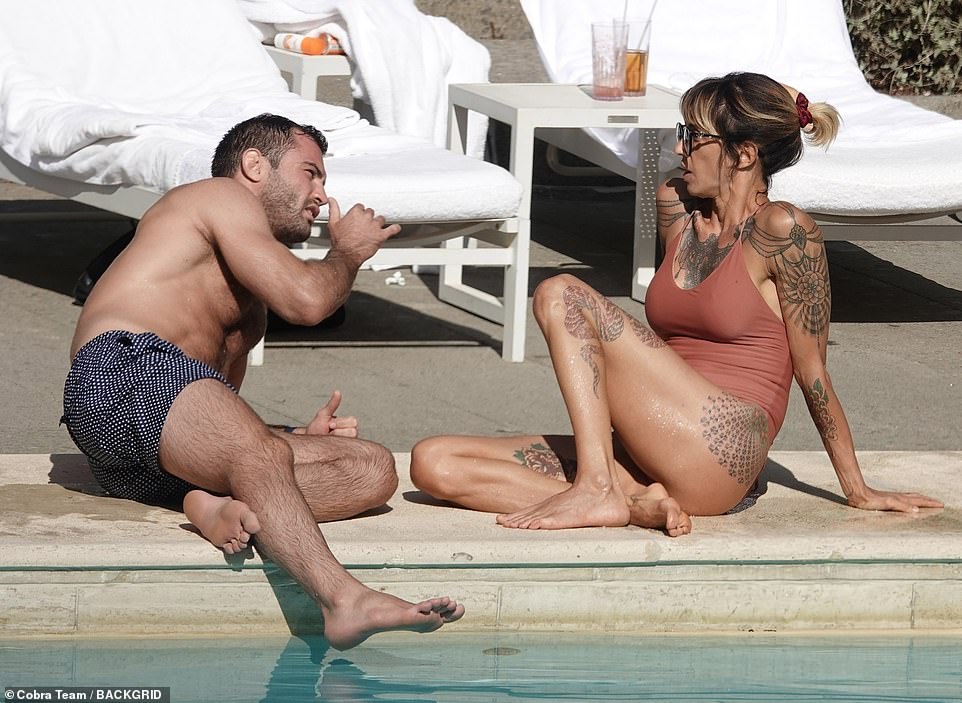 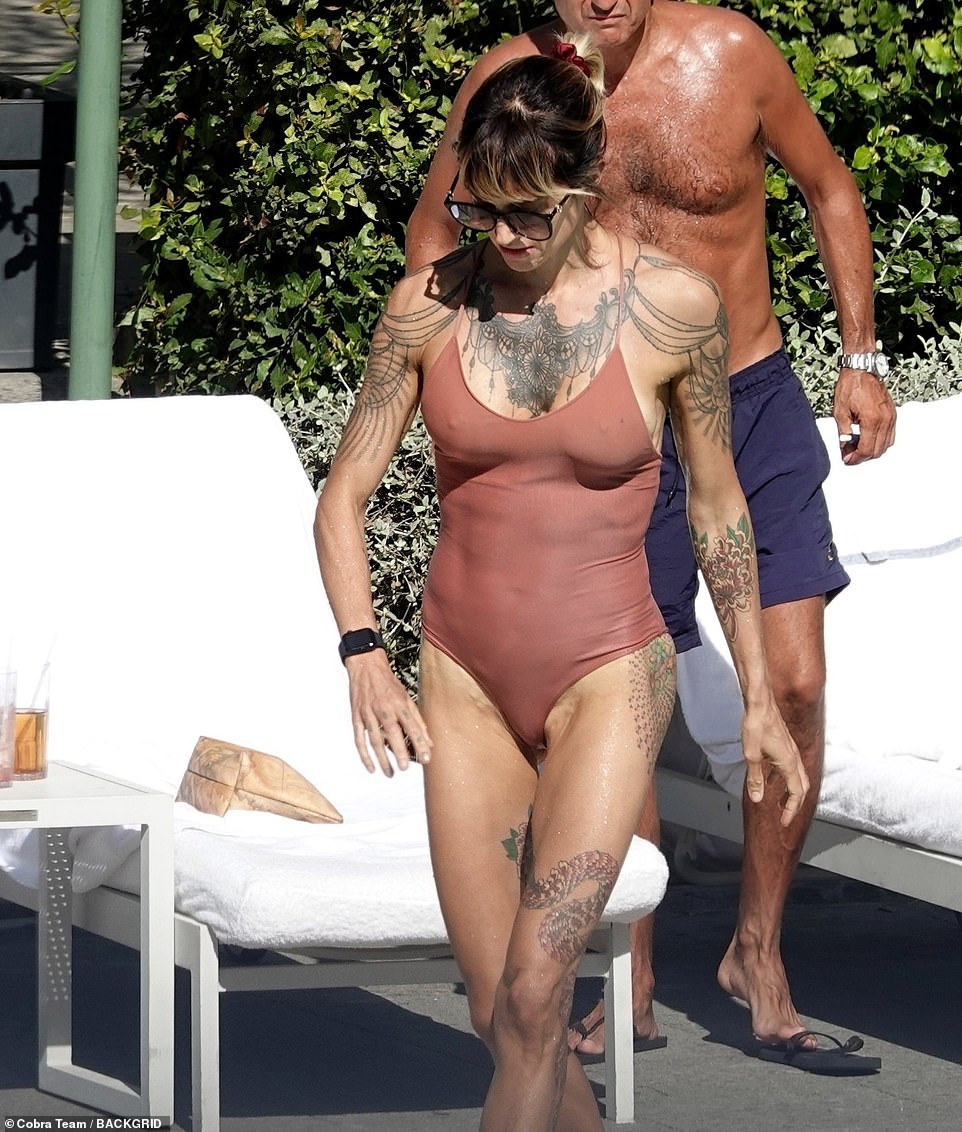 Pictured: Asia Argento in her peach one-piece as she led Michele Martignoni towards the poolside 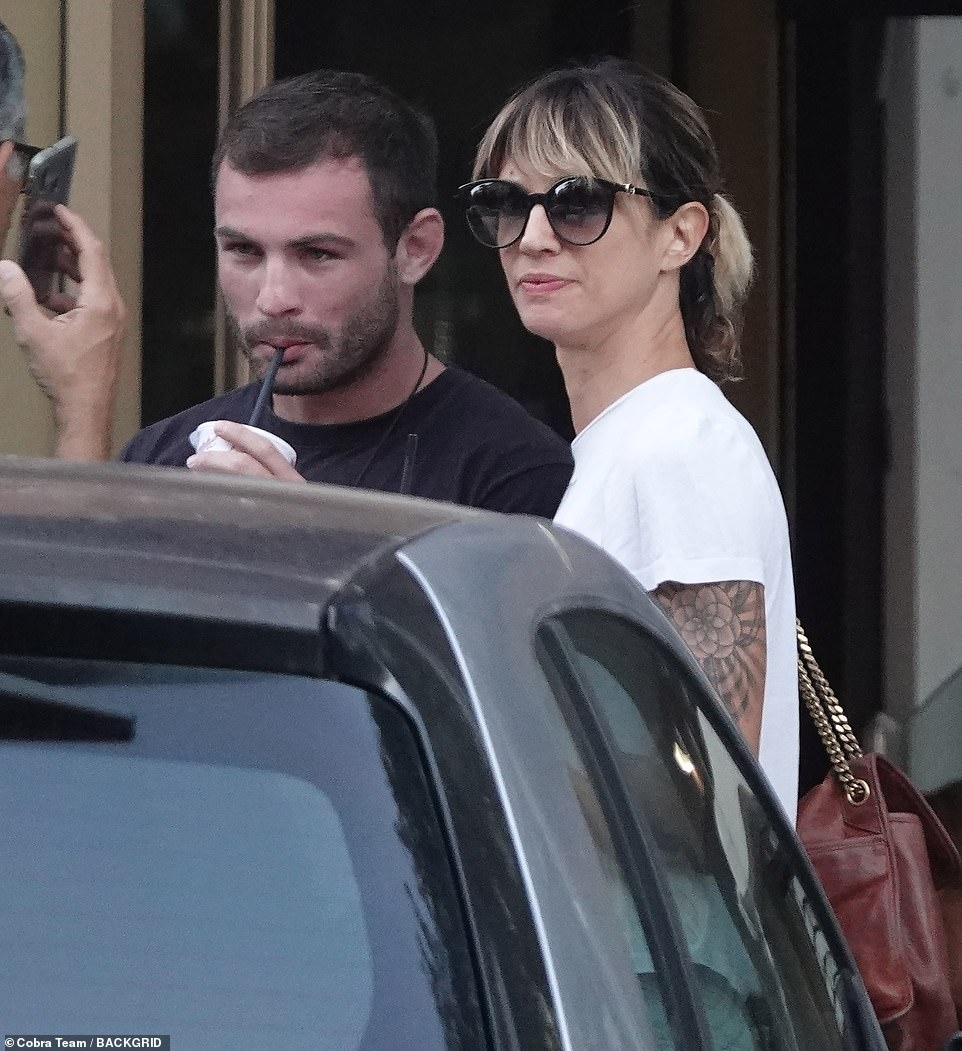 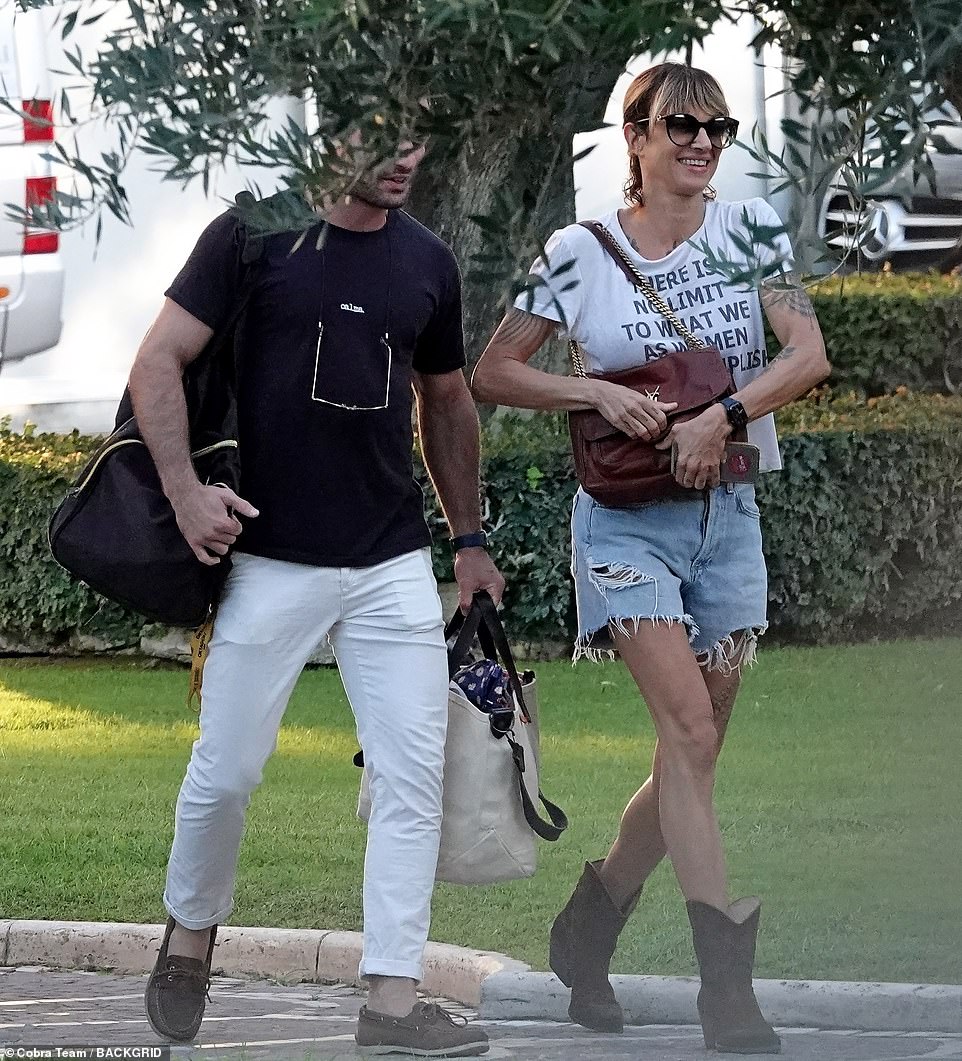 Argento’s shirt read: ‘Here is no limit to what we as women can accomplish,’ as she walked out with torn-up jean shorts and boots. Martignoni wore a black t-shirt and white pants 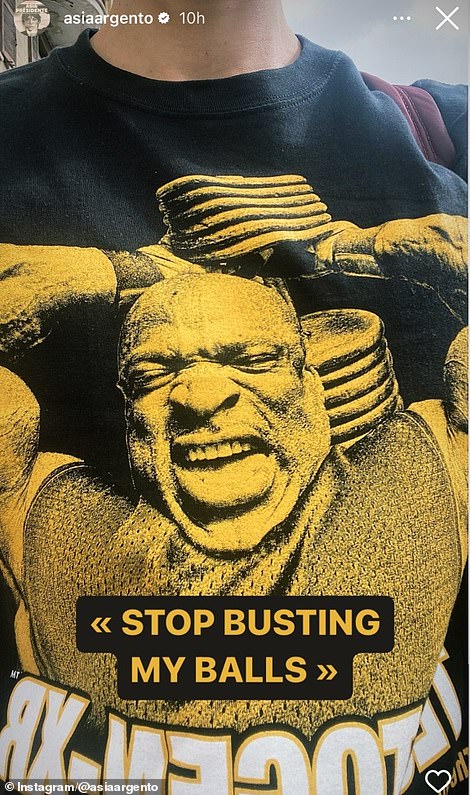 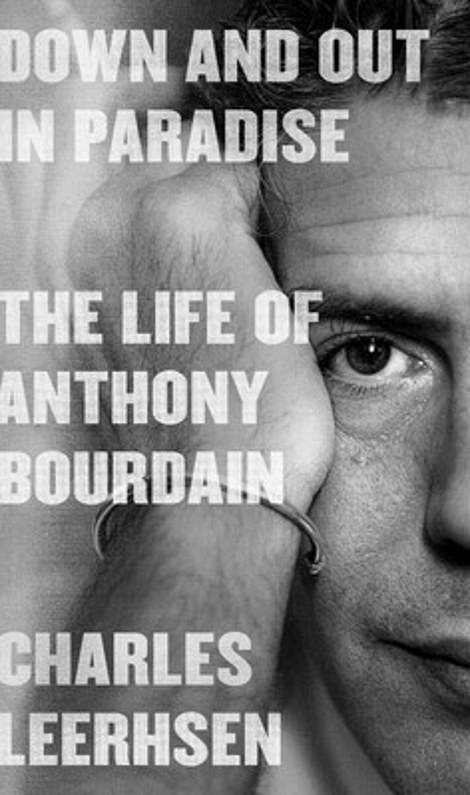 Pictured: The image posted to Asia Argento’s Instagram (left). It features former professional bodybuilder Ronnie Coleman and the phrase ‘Stop Busting My Balls,’ which she reportedly sent to boyfriend Anthony Bourdain before his June 2018 suicide, according to an unathorized biography of the late celebrity (right) 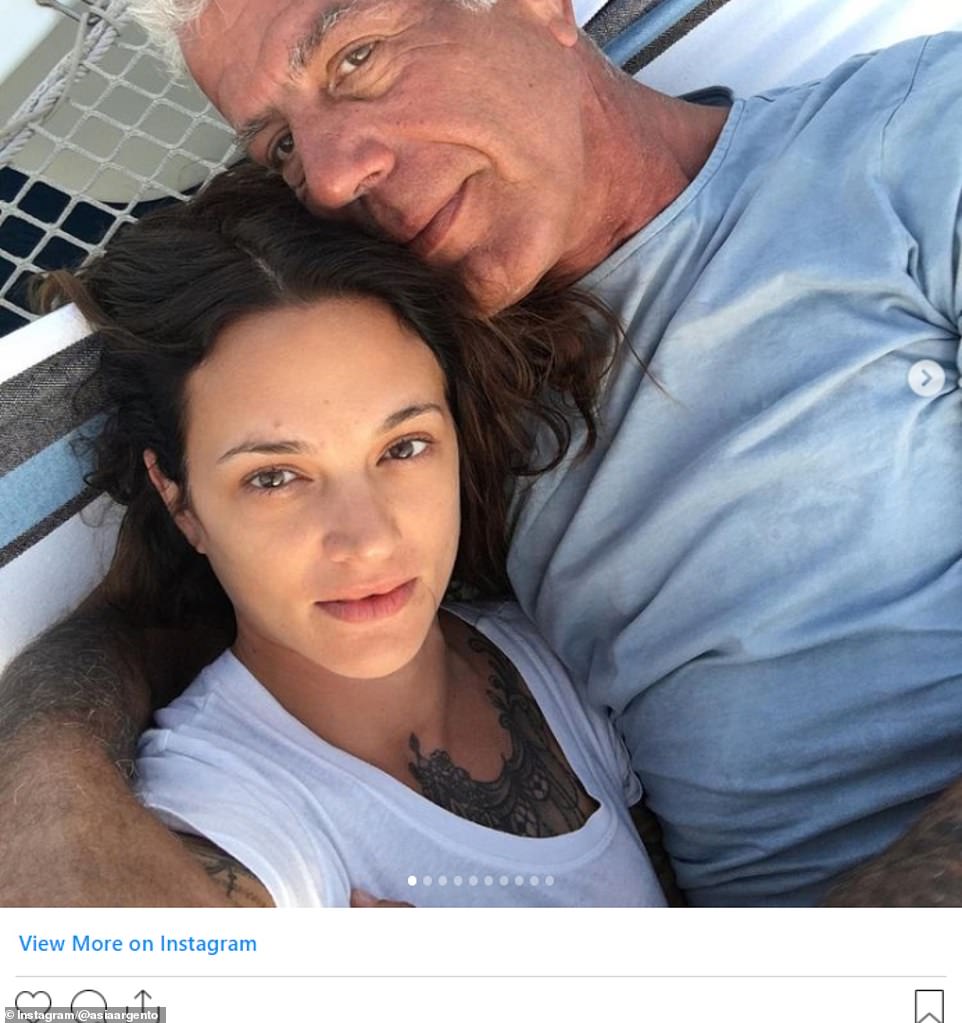 The biography uses files, texts and emails from Bourdain’s personal phone and laptop to paint a picture of the chef’s life and highlights his turbulent last days before he took his own life in June 2018.

While filming his CNN show, ‘Parts Unknown,’ in France, Bourdain was fighting with the Italian actress while he was on set and left ‘multiple times to talk to her on the phone,’ according to the book.

Bourdain became angry that she was spotted by paparazzi with journalist Hugo Clément in the lobby of Hotel de Russie in Rome, where he and Argento shared special memories.

‘Things escalated on Wednesday when by all accounts she told him she no longer wanted to be with him,’ the book reads.

‘Everyone was keeping an eye on him all day and night because he was incredibly distraught. More screaming phone calls through the day. By Thursday he seemed to be better and kind of wanted everyone to back off.’

In an email to the journalist, she said she forbade him from publishing, adding: ‘It is always Judas who writes the biography.’

‘People say I murdered him. They say I killed him,’ she said through tears in the interview.

‘People need to think that he killed himself for something like this? He had cheated on me too. It wasn’t a problem for us. He was a man who traveled 265 days a year. We took great pleasure in each other’s company when we saw each other. But we are not children. We are grown-ups.’ 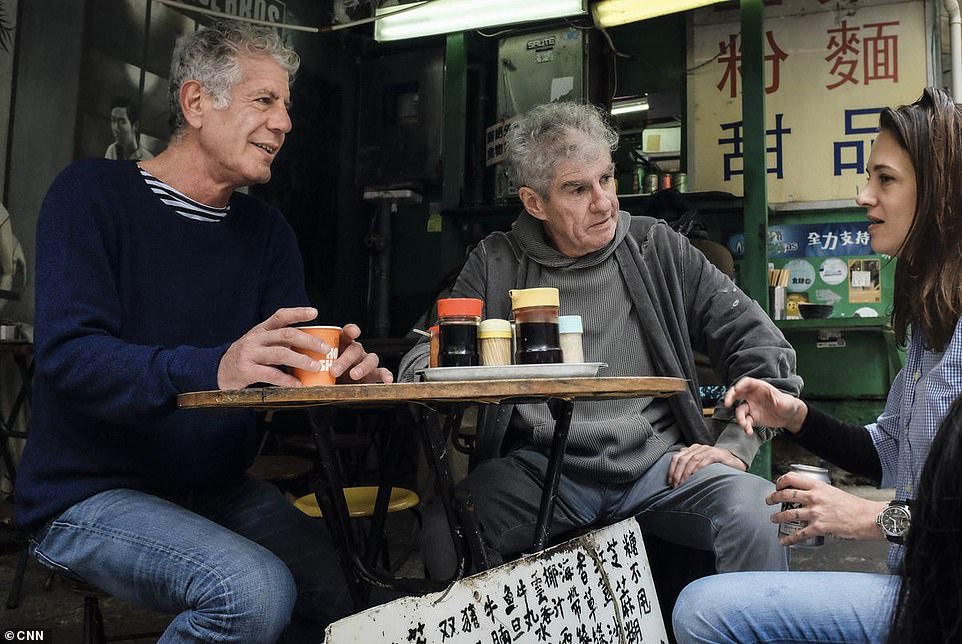 Bourdain was upset with Argento after she was spotted with journalist Hugo Clément at the Hotel de Russie in Rome, where he and Argento shared special memories 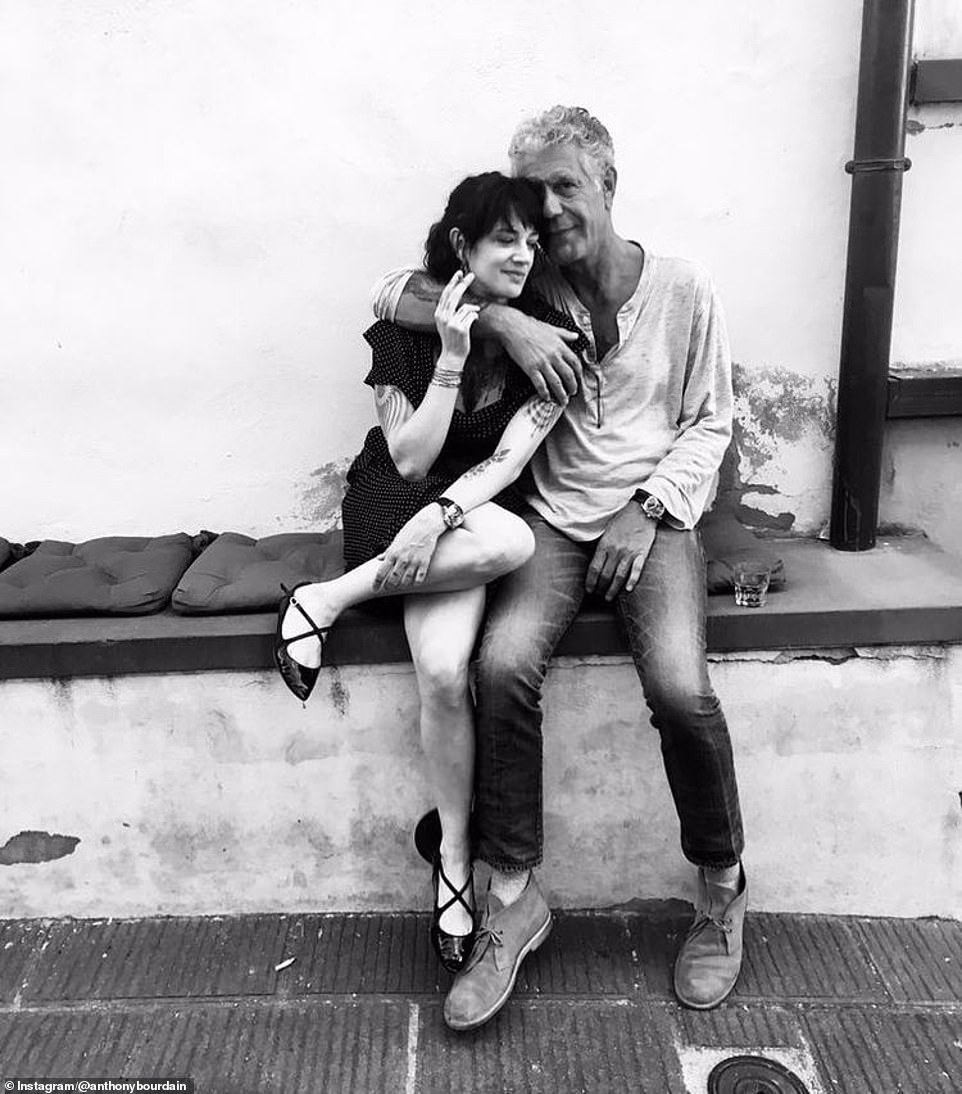 Bourdain asked: ‘Is there anything I can do?’ She replied: ‘Stop busting my balls’

Though Argento and Bourdain’s brother are against releasing the ‘unauthorized’ biography, Leehrsen defended his book, which goes on sale October 11, as ‘sympathetic’ and ‘true to the man.’

‘Every single thing he writes about relationships and interactions within our family as kids and as adults he fabricated or got totally wrong,’ Christopher, Bourdain’s brother, told The New York Times.

The explosive new biography claims Bourdain had been struggling with alcohol and steroids and that he’d also been sleeping with prostitutes.

In one text to his ex-wife, Ottavia Busia-Bourdain, he complained: ‘I hate my fans, too. I hate being famous. I hate my job. I am lonely and living in constant uncertainty.’

Charles Leerhsen, the author of the book, has previously written for Rolling Stone. He is also the former executive editor of Sports Illustrated.

He told The New York Times he wanted to offer a side of Bourdain that didn’t have the varnish of ‘an official Bourdain product.’

By the end of his life, he said he believes the chef ‘knew what he had become.’ 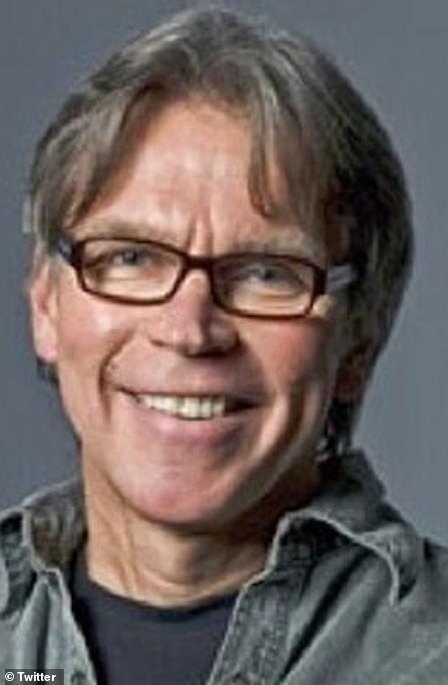 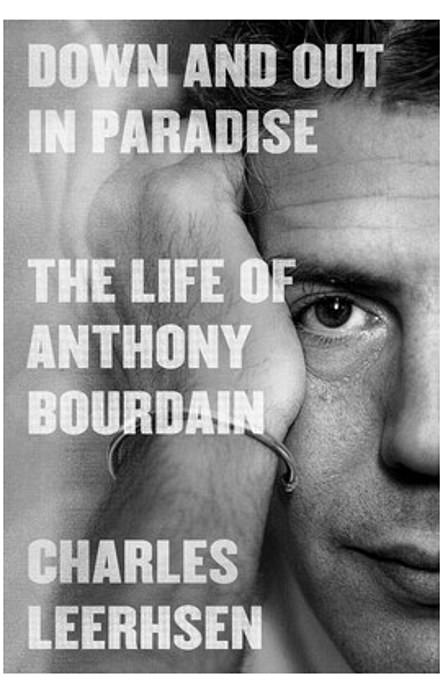 Charles Leerhsen’s book, ‘Down And Out In Paradise: The Life of Anthony Bourdain’ is due to be published on October 11

‘I think at the very end, in the last days and hours, he realized what he had become.

‘I don’t respect him killing himself, but he did realize and he did ultimately know he didn’t want to be that person he had become,’ he said.

‘A lot of people were willing to talk to me because they were left behind by Tony and by the Tony train,’  he said.