Ask DR ELLIE CANNON: Could a diet give me gallstones?

What are gallstones and what is the best treatment for them? I’ve read that very low-calorie diets can cause them and I’ve recently lost two stone on a fasting diet. Should I be worried? I am a 70-year-old woman.

The gall bladder is a small sac beneath the liver that contains bile – a liquid which processes dietary fat during digestion. Bile is released when fat is eaten.

In some people, an imbalance in the chemical components within bile leads to an excess of one ingredient, which can form into stones. Gallstones are incredibly common and for most people cause no symptoms. But when the stones travel in the gall bladder ducts or get stuck, pain occurs.

Gallstones, pictured, are more common in women aged over 40 especially if they are obese

Stones are more common in women over 40 and are associated with obesity, liver problems or bowel issues such as IBS – and are, indeed proven, in medical studies, to be a possible complication of very low-calorie diets – such as meal-replacement shakes. However, the risks are still small. It is likely that a sudden alteration in the amount of fat eaten disrupts the bile ingredient balance, leading to stones.

Most people with gallstones do not have any treatment but rather watch and wait. In those with attacks of pain – known as biliary colic – a low-fat diet may control symptoms. More invasive treatments are used for regular and severe symptoms, such as surgery to remove the gall bladder or treatment to break up the stones.

I am a 65-year-old man and took finasteride tablets for an enlarged prostate for about two years, but stopped a year ago as I started growing breasts. I have tried high-intensity exercises five days a week and lost two stone but nothing has come off my breasts. Can you help?

Finasteride is a drug commonly used for prostate conditions that affects the metabolism of the male hormone testosterone. A known side effect of the drug is a condition called gynaecomastia, or breast enlargement in men, caused by changes in the testosterone and oestrogen balance. As the proportion of the female hormone oestrogen increases, breast growth is stimulated. It is not merely fat but breast tissue, swelling and inflammation. The breast tissue cannot be lost like other fat in the body, so fat-burning exercises are unlikely to reduce the gynaecomastia.

Usually when gynaecomastia occurs with a drug, it reduces when the drug is stopped.

Radiotherapy can be used to lessen the breast tissue of gynaecomastia, as can anti-hormonal drugs including the breast-cancer treatment tamoxifen. It may be possible to have surgery on the NHS to remove the breast issue.

Selma’s not too young for MS 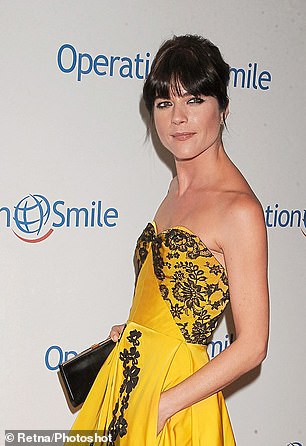 Selma Blair, pictured, has revealed she is suffering from multiple sclerosis

Hollywood actress Selma Blair, 46, has revealed she has multiple sclerosis (MS) and has been living with it since she was 30.

Many were shocked that the glamorous star of Cruel Intentions could develop the degenerative disease at such a young age, but her case is typical.

The illness is more common in women and, on average, its effects (including muscle stiffness, pain and exhaustion) do start to appear at the age of about 30.

But these symptoms can initially be hard to link to MS, meaning diagnosis is often delayed by a number of years.

MS is undoubtedly a devastating condition and I hope Selma’s story will provide comfort to others.

Apparently, people who eat organic food are 25 per cent less likely to get cancer, according to a French study of more than 68,000 adults.

Of course, the anti-cancer effect seen in the study is merely an association: those who choose to buy organic food are from a sector of society less likely to get cancer anyway.