ASK THE DOCTOR: Could exercise be risky now I’m over 80?

Can exercise be dangerous for the over-80s? I walk two miles every morning, work out with weights three times a week and swim 40 lengths every Friday. I also conquered Kilimanjaro on my 80th birthday. I am 82.

You have sent me the letter of the year. The exercise regimen you describe is a rarity for a man of 82, and I congratulate you.

I have always insisted that before someone decides not to exercise, they must undergo a medical examination to check it’s safe for them to be sedentary — and it is never safe. The fact is, regular inactivity is bad for health.

Meanwhile, regular exercise has many benefits: it helps build healthy bones and muscles which, in older people, help to maintain strength and balance, giving a degree of protection against falls.

Studies show regular exercise of any kind reduces the risk of high blood pressure, diabetes, depression, heart disease, stroke and colon cancer — and of dying prematurely. So the simple answer to your question is that the benefits of physical activity exceed the risks for most of us — even as we get older.

While our bones do become weaker with age — which may raise the risk of breakage slightly — again, it is not a reason to stop exercising because it strengthens bones and muscles.

Possibly the biggest fear for most is what the strain of exercise could do to the older heart — but let me reassure you.

If you have underlying heart problems, there is a risk that exercise could trigger symptoms such as an irregular rhythm. But your regimen will have reduced this risk by increasing the oxygen supply to your heart.

Another concern is the chance of a fatal heart attack during exercise, but this is actually quite rare in older people. The Physicians’ Health Study, which monitored 20,000 men for 12 years, found that the risk of a sudden, heart-related death was one in 1.5 million episodes of exercise.

And your risk may be lower given your exercise routine, though there may be other risk factors that should be taken into account: family history, cholesterol level, blood pressure and weight (to be discussed with your doctor).

But the fact that you climbed Kilimanjaro — which, at almost 20,000 ft, has an atmosphere that’s significantly low in oxygen — is testimony to your impressive heart and lung function.

I urge you to maintain this level of activity, and I encourage all who read this to take up regular exercise if they currently do not. A sedentary lifestyle is slow suicide.

About a year ago, I took my grandson camping. One day after eating, he complained of feeling sick, his face went numb and he had difficulty breathing. He was taken to hospital where we were told he’d had an extreme allergic reaction. How can we find out what he’s allergic to?

From your description I have a little doubt that your grandson suffered an episode of anaphylaxis, an extreme allergic reaction that is potentially life-threatening and demands immediate diagnosis.

Anaphylaxis is characterised by a sudden onset of symptoms affecting the skin (for example, hives) and/or mucosal tissue (swelling of the lips, mouth or tongue), or a person may collapse due to a drop in blood pressure.

Gut-related symptoms such as nausea and vomiting or abdominal pain may occur in response to a food trigger. 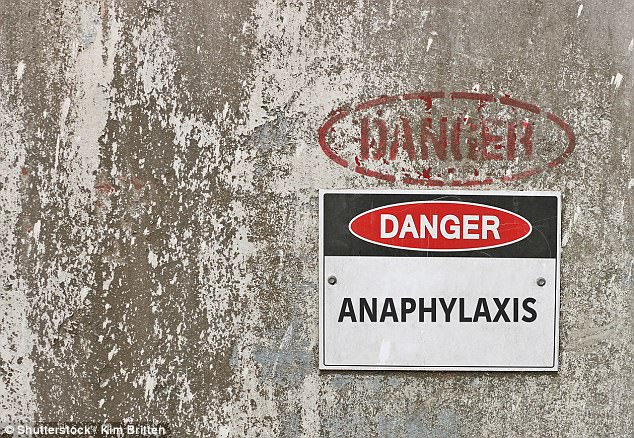 Anaphylaxis is characterised by a sudden onset of symptoms affecting the skin and/or mucosal tissue, or a person may collapse due to a drop in blood pressure

Anybody who’s experienced a reaction like this must be evaluated to determine the cause — anything that has been consumed or has come into contact with the body in the hour or two prior to the onset of symptoms is critical information.

In the case of your grandson, the key problem is that the exact contents of what he ate at teatime isn’t known.

A further and more obscure thought is that perhaps he suffered an insect bite. Maybe it was small and had abated by the time he got to A&E, not least because he would have been given adrenaline in the ambulance, which would have reduced the immune response.

With no guidance about what to avoid, the possibility of a future episode is a concern. You should ensure he has been prescribed two EpiPens — injections of adrenaline — and that he carries them everywhere. If there is another episode, the family must document all possible triggers.

Allergy testing includes skin and blood tests to look for a protein called IgE, which is released in response to a trigger — his parents should ask his GP to refer him to a specialist.

In a study of 500 patients who had been diagnosed with anaphylaxis, only 38 per cent were referred to a specialist clinic, according to a report in the Journal of Allergy and Clinical Immunology. But for a third of these patients, the suspected trigger was altered after proper analysis.

This tells us that specialist assessment is worthwhile, particularly when the trigger has not yet been properly identified.

By the way… ‘Sticky blood’ may be making you feel ill

Hughes syndrome is probably the most important medical disorder you’ve never heard of.

Also known as ‘sticky blood’, it is a disorder of the immune system that causes an increased risk of blood clots, and emerging research shows it is a major cause of conditions as varied as migraines, angina and recurrent miscarriages.

Some estimate that it may affect as many as 600,000 people in the UK, but many won’t realise it.

First identified in 1983 by Professor Graham Hughes, a London rheumatologist, the condition causes the body to make abnormal antibodies that target phospholipids, a component of cells. As a result, the blood can clot excessively and that makes the brain — and in pregnancy, the placenta — particularly vulnerable.

It affects people of all ages and is implicated in one in five strokes in people under 45 and in one in five miscarriages, as well as in unexplained deep vein thrombosis, migraines, seizures, memory loss and other neurological symptoms, and unexplained minor fractures and hip pain.

It is treatable — with low-dose aspirin once daily, or other stronger forms of anti-clotting drugs — though only if the condition is diagnosed in time, with a blood test to detect the antiphospholipid antibodies.

Recently, I attended the launch of The Graham Hughes International Charity, which aims to promote greater understanding and awareness of this dangerous disorder. All GPs have patients with the condition, but, sadly, we all miss cases.

Previously in these pages, Professor Hughes has urged anyone who has unexplained symptoms such as recurrent miscarriage and blood clots (where there is no clear cause) to press for a test.

We all need to ensure Hughes syndrome no longer flies under the diagnostic radar.