ASK THE GP: Blood pressure pills have made me impotent

Question: I have always enjoyed an active sex life, but since being prescribed drugs for high blood pressure, I have failed to obtain, or maintain, an erection. I tried Viagra, which didn’t work. Is there anything else that might help? I am desperate.

A. Blackburn, by email.

Answer: Diligent control of your blood pressure is vital for your long-term health and survival, but you are right — the drugs that are keeping your blood pressure under control can also cause impotence (or erectile dysfunction, to give it its medical name).

This is a well-known and common side-effect. Erectile dysfunction is thought to affect half of all men aged between 40 and 70 to some degree.

As well as being a side-effect of certain drugs, it’s been linked to a number of illnesses, such as diabetes and heart disease, which can impair blood flow to the penis.

Dr Martin Scurr answers a question on whether blood pressure pills have made a man from Blackburn, impotent

In heart disease, there is often atheroma, a build-up of sticky plaques inside arteries. This inevitably impairs blood flow around the body, including to the penis.

However, studies also show that erectile dysfunction is more frequent in patients with high blood pressure.

Have you heard about prescription prepayment certificates (PPCs)? Chances are, you haven’t — but behind the rather cumbersome name is a very useful thing.

A PPC is a way of getting as many NHS prescriptions as you need for a set price over a certain time frame, by paying a fee upfront. For instance, a three-month PPC is £29.10; for a year, it’s £104. If you’re paying for your prescriptions (in England, £8.60 each), you can see how this could save cash.

The reasons for this are unclear, but it leaves a further unanswered question for you: is your erectile dysfunction the result of the high blood pressure itself, or due to the drugs prescribed for the condition? Or possibly a combination of both?

You mention in your longer letter that you are taking indapamide. This is what’s known as a diuretic drug, and it works by flushing excess salt out of your system; too much can cause extra fluid to build up in your blood vessels, raising your blood pressure. I believe this is playing a major part in your impotence problem.

The good news is that this effect is not permanent and a change in medication should allow a return to normal function.

Talk to your doctor, who may suggest replacing your indapamide with another class of blood pressure-lowering drug that doesn’t hamper things in the bedroom — such as a so-called angiotensin antagonist (these include losartan and candesartan) or an ACE inhibitor (for example, enalapril) or calcium-channel blockers (such as amlodipine).

You may already be prescribed some of these — more than one mechanism is usually required to achieve sufficient blood pressure control.

You say you have tried Viagra, to no effect. Viagra (generic name, sildenafil), like Cialis (tadalafil), the other main impotence drug, works by increasing blood flow to the area. Your lack of response to these drugs is disappointing.

But this may be because you are on a diuretic and these medications work in opposite ways.

Possibly the Viagra dose was not high enough or maintained for long enough for full effect — you say you were prescribed a one-off dose. I’d suggest asking your GP about prescribing Cialis instead, every day at a dose of 5mg regularly for a longer period than before. 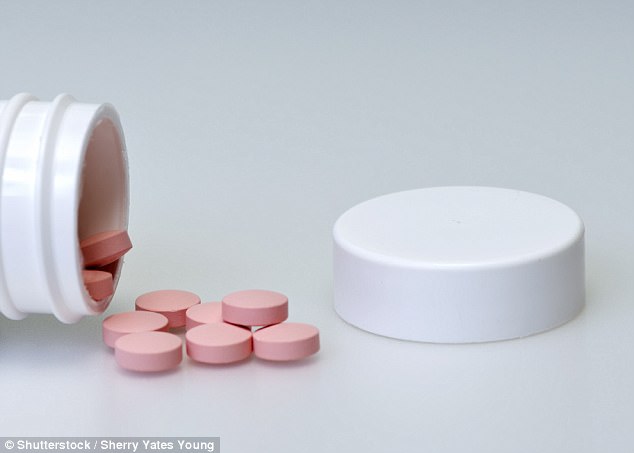 His question reads: ‘I have always enjoyed an active sex life, but since being prescribed drugs for high blood pressure, I have failed to obtain, or maintain, an erection’

If the above changes are ineffective, an ultrasound scan to assess the blood supply to the penis is necessary, as there may be another cause, such as atheroma, which is impeding blood supply.

Your GP could refer you for this. I do hope that an adjustment of your medication after a further discussion with your GP will result in better function.

Question: I hear roaring and hissing regularly and it’s driving me mad. I also have tendonitis in my left shoulder. My health is making me depressed and it doesn’t feel like a life worth living. I am 72.

Answer: Your letter gives me great concern, troubled as you are by your chronic shoulder pain, tinnitus and a clear, significant diagnosis of depression. I will consider each of these problems separately, but let me reassure you that there is hope for them all.

Tendonitis is where there is swelling of the tendon, a thick cord that attaches bone to muscle. It is usually due to trauma or repetitive overuse, but can be treated. It may sound obvious, but the first step is to stop the activities that caused the injury until you feel better — so rest your shoulder as much as possible.

Try ice or heat packs to reduce inflammation and pain, as well as friction massage, where you gently rub the inflamed area. The tendonitis should ease within a month.

Tinnitus is the perception of sound (typically ringing, buzzing or hissing) when there’s no external source. Many people, including doctors, fail to realise the devastating impact it can have, and your longer letter illustrates this.

The condition can be triggered by an underlying condition involving blood vessels close to the ear, or by deterioration of the microscopic hairs on the hearing cells of the inner ear.

One theory is that without the normal sound input along hearing nerve pathways, nerve cells in the brain activate spontaneously, ‘creating’ phantom sounds that you hear as hissing or ringing.

Crucially, anyone with significant tinnitus must undergo specialist evaluation to ensure no disease is behind the damage. Typically, no obvious cause is found.

However, one theory is that tinnitus may be considered a type of seizure, due to irritability or abnormal firing in nerve pathways — and so anti-seizure medication may be prescribed.

There is evidence that treatment with the antidepressant nortriptyline can help with severe tinnitus. Here, it is not working as an antidepressant as the dose used is low; it is thought to work by dampening down irritable nerve cells.

WHY I’M WORRIED ABOUT…

Apparently, Public Health England hopes the makers of burgers and pizzas will shrink their products, following the news that a quarter of the calories we consume comes from ready-to-eat foods bought outside the home.

This is contributing to the obesity epidemic — but why stop at burgers?

We all know these foods are bad news, yet many will happily knock back huge takeaway coffees without a thought — even though doing this daily for a week could easily add up to a pound in extra weight.

And the people who drink these are often the ones who are likely to avoid ‘fattening’ chips or burgers.

An audiologist may recommend tinnitus retraining therapy, too, which is based on bypassing, or overriding, the abnormal sound messages, by strengthening areas that aren’t involved in hearing.

The goal is to get the patient to a stage where they are unaware of their tinnitus unless they consciously focus on it.

Many people with tinnitus — and you are one — also have anxiety or depression. It is essential that you speak to your GP about referral both to an audiologist with an interest in this disabling complaint and, ideally, also to a psychiatrist (and hope that there is sufficient supply in your area, otherwise this could take a while), or, at the very least, for psychological therapy such as cognitive behavioural therapy (CBT), which aims to change the way patients think about their symptoms.

The psychiatrist will carry out a full assessment of your depression and have access to stress reduction programmes, and possibly also offer CBT.

Please be reassured others have walked this walk and recovered.

In my opinion…make sleep your priority

One of the simplest, but most important, things we can do for our health — something we too often overlook — is to get enough sleep. Sleep is not only just as important as diet and exercise for good health, but it is also the bedrock on which the other two rest, according to Professor Matthew Walker, a leading sleep expert and neuroscientist based at the University of California.

Thanks to advances in scanning technology, our knowledge about what happens while we sleep has progressed in leaps and bounds.

And the research has given insight into the damaging effects of a lack of shut-eye, from impairing the immune system to contributing to the development of dementia and possibly depression, diabetes and infertility.

I mentioned this in passing last week, but I think it really is worth stressing again: what multiple studies have shown is that we need eight hours’ sleep a night, unimpaired by caffeine, falsified by sleeping pills or damaged by alcohol intake. In other words, it must be natural sleep.

Quite apart from its effect on mental and physical wellbeing, research has shown that reduced sleep time — perhaps not surprisingly — affects our ability to work, causing a slower work rate, lack of satisfaction at work and lower productivity. The damaging effects of too little sleep are equally evident in leaders and senior managers as on the shop floor.

Yet, in our society, we value employees who cut themselves short on sleep in order to get to work early, and who stay late beyond their contracted hours.

Anyone who believes they can cut themselves short on sleep during the working week and catch up at the weekend will be disappointed: research tells us that the damage is done by sleep deprivation at the time. Nature doesn’t allow us a sleep ‘overdraft’ to pay off a sleep debt later.

So, if there is one thing you do this year for your health, make it getting enough sleep.

Write to Dr Scurr at Good Health, Daily Mail, 2 Derry Street, London W8 5TT or email drmartin@dailymail.co.uk – include your contact details. Dr Scurr cannot enter into personal correspondence. Replies should be taken in a general context and always consult your GP with any health worries.