Ask the GP: How can I banish the misery of restless legs?

Q: My wife has suffered from restless legs syndrome for years. Is there any hope?

A: Restless legs syndrome (RLS) affects between 5 and 15 per cent of adults and, since 2011, has been referred to as Willis-Ekbom Disease, reflecting the names of the two doctors involved in identifying the condition — Thomas Willis in the 17th century and Karl-Axel Ekbom in the Forties.

The disorder triggers an unpleasant, irresistible urge to move the legs; the sensation is often described as burning or itching. When the patient moves, the symptoms seem to subside, only to return as soon as they rest again.

Typically, the symptoms are worse at night and so patients — and indeed their partners — can suffer from insomnia and sleep disturbance. In most people, the symptoms are mild, but in 2 per cent of cases, they are significant and patients need to see a GP or a specialist as the disorder interferes with daily life.

Restless legs syndrome affects between 5 and 15 per cent of adults and, since 2011

Quite what is happening to cause restless legs is far from certain, although we know that it involves malfunction of nerves in the lower legs.

Sometimes, it’s related to an underlying medical disorder, such as kidney disease or diabetes, which can affect nerve function.

Another cause is iron deficiency — studies have shown that patients with restless legs have lower iron stores in and around the brain, including the areas that transmit signals to the legs.

Therefore, the first step you should take is to ensure that your wife’s GP has tested her iron levels and that any deficiency is corrected with a supplement.

It may also be that the brain chemical dopamine plays a role, as the symptoms seem to improve with medication that increases dopamine production.

Yet patients with RLS don’t seem to have dopamine deficiency, so the exact mechanisms are unclear.

It is also worth noting that several medications seem to make the condition worse because of their effects on dopamine in the brain. 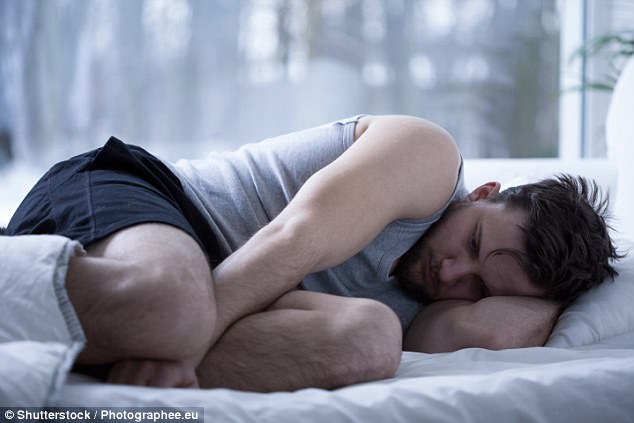 Typically, RLS symptoms are worse at night and so patients — and indeed their partners — can suffer from insomnia and sleep disturbance

As a result, taking these medicines may interfere with effective treatment. In particular, this includes the antihistamine diphenhydramine (known as Piriton when taken for allergy, or Nytol when taken as an over-the-counter sleeping pill), most antidepressants, and some anti-nausea drugs, such as metoclopramide. If your wife is taking any of these, she should discuss this with her doctor.

Once any iron deficiency is resolved, treatment will be with one of two classes of drugs.

Dopamine agonists are drugs that directly stimulate dopamine receptors in the brain and cause dopamine-like effects.

They include pramipexole and ropinirole — both available as once-daily tablets.

The dose of either may need to be gradually increased to gain best relief. The side-effects are usually mild and temporary, but can include lightheadedness and fatigue.

If these are unsuccessful, then another option is a skin patch — replaced daily — that delivers another type of dopamine agonist, rotigotine, through the skin.

The second class of drugs are the anticonvulsants such as gabapentin, which can be helpful in reducing the severity of symptoms, effectively dampening down the nerve reaction.

The most important thing for your wife is that any iron deficiency is corrected and, if drug treatments prove ineffective, that she is referred to a specialist — usually a neurologist — at a sleep clinic.

Be reassured that, in most cases, the symptoms can be relieved.

It has been announced that, from March, most of the major supermarkets will ban the sale of so-called energy drinks to the under-16s.

About time, too. A single 500ml can of these drinks can contain as much as 20 teaspoons of sugar and 160mg of caffeine — that’s more caffeine than you would get from two espressos. Little wonder these drinks have been linked to poor behaviour in schools.

Now, the under-16s won’t be able to buy any drink from supermarkets that contains more than 150mg of caffeine per litre.

But why did we ever allow children to buy these drinks in the first place?

Q: After undergoing the NHS MOT for over-60s last year, I was told that I have high blood pressure. I’m not overweight, cycle five miles daily and practise karate.

I also limit my salt intake (but then read an article saying salt wasn’t a factor). I eat kiwi, beetroot, broccoli and bananas — all of which supposedly lower blood pressure — and I am on 2.5mg ramipril daily. What else can I do? I am 63.

A: I applaud you. The amount of regular exercise you take is excellent — few people achieve this — and your dietary choices are good news for your health.

In particular, reducing your salt intake will undoubtedly help with your blood pressure control — unlike the article you read, I adhere to the long-term teaching that salt is bad news for the cardiovascular system: studies have established beyond doubt that lowering intake reduces blood pressure and significantly reduces the risk of cardiovascular disease.

The adverse effects of salt occur over time. Essentially, a high-salt diet raises the amount of sodium in your bloodstream and wrecks the delicate fluid balance system in your body as it holds on to extra water to ‘wash’ this out.

The result is higher blood pressure — hypertension — due to the extra fluid and strain on the delicate blood vessels.

You mention in your longer letter that you’re confused by conflicting advice about diet and blood pressure. I suspect the study you are thinking of was one published in 2015 in the journal JAMA Internal Medicine.

This study showed that the risk of cardiovascular disease was not significantly different in people aged 71 to 80 who had similar blood pressures, but differing levels of salt intake.

However, the authors were cautious and said the study does not contradict current dietary guidelines that we should consume less than 6g of salt a day.

WHY I’M WORRIED ABOUT

It’s a touch ironic that younger generations, who have grown up with a mobile phone attached to their hand, are, according to research out this week, seemingly losing the skill of conversation.

They are more at home texting and staying in touch via social media, rather than actually talking to one another face-to-face — and this, warns Cancer Research UK, is leading to social isolation.

Perhaps one answer is to follow the lead of actress Joanna Lumley, who uses her mobile phone only to pay for parking. ‘I will turn it on . . . use it to park, then switch it off,’ she confides. Maybe more of us should do the same.

Looking at the blood pressure results you describe in your longer letter, you appear to be well-controlled on minimal treatment.

If your blood pressure is consistently above 140/90, the control is not good enough — but you are doing better than that (now below 130/70).

Two things that we can all do, in addition to regular exercise, salt restriction and eating plenty of fruit and vegetables, are: engage in a daily meditative activity and ensure you get enough sleep.

By meditative activity, I mean yoga or tai chi, or using an app such as Pzizz or Headspace, which help to clear the mind. Of course, these are not a replacement for blood pressure-lowering medication, but studies have suggested relaxation techniques can help lower blood pressure, although exactly how is not clear.

Sleep is greatly undervalued, too: eight hours is recommended. You may need to re-learn good habits to make certain of this, but it is worth the effort, as it will benefit your brain, your immune system — and your blood pressure.

IN MY VIEW… WAR ON CANCER CAN BE WON

Most people will know that cancer is a disease caused by abnormal cells. But what many might not realise is that it is caused by changes in the genes within a normal cell.

Nearly every cell in the body contains a complete set of our 20,000 genes, our genome. These genes, in fact, constitute only around 5 per cent of our DNA, our genetic blueprint.

The remaining DNA material was thought to be redundant, and the focus was on our genes as determining what happened in our bodies. But recently, scientists realised that the ‘superfluous’ or ‘junk’ DNA was actually important, influencing and controlling how our genes behave.

The initial change in a cell that leads to cancer may be inherited, but may also be due to external factors that can affect the action of genes, such as radiation, toxins in tobacco or industrial chemicals.

A venture called Genomics England is investigating the genes of 70,000 people with cancer and their families.

By collating the history and progress of these patients with their genomes, this project will change the way we diagnose illnesses in the future and help in devising innovative drug treatments, creating opportunities to personalise treatment for the best effect.

This is already happening: for example, if a breast cancer patient’s tumour tests positive for the HER2 gene, we know that the drug Herceptin will be effective.

There is also a test for breast cancer tumours that looks at 21 genes to predict the likelihood of the disease recurring — and whether chemotherapy will be of benefit.

We are witnessing a revolution. And within our lifetimes, we may well win the war on cancer that President Nixon started in 1971.