ASK THE GP: Is there anything that can cure my mother’s back pain?

Fact: The foundations of osteoporosis are laid down in teenage years and, by the time a person is 20 or so, they will have reached peak bone mass and strength

My 87-year-old mother has had severe lower back pain for several months now. An osteopath arranged an X-ray and said her spine curved in two directions and that she had a trapped nerve. She spent some time on treatment, but is in more pain than before.

How concerning it must be to both of you that your mother’s back has worsened, despite her expensive treatment.

My feeling is that an exact diagnosis would be of great value — and that a specialist in spinal disorders could give a more detailed assessment than an osteopath and order more sophisticated scans.

In someone of your mother’s age, there are two common potential causes of her symptoms. The first is osteoporosis, the condition characterised by thinning of the bones, which results in them becoming weak and fragile.

They can become so fragile that even something as simple as bending over or coughing can lead to a fracture, with the hips, wrists and spine most commonly affected.

In your mother’s case, one or more of the vertebrae — the bones that stack on top of each other to form the spine — may have cracked or crumbled.

Known as a spinal compression fracture, this would lead to the curvature of the spine identified on her X-ray and could account for the pain she is experiencing.

The foundations of osteoporosis are laid down in teenage years and, by the time a person is 20 or so, they will have reached peak bone mass and strength, when the bones are as good as they ever can be.

Milk and other dairy products are especially rich in the calcium needed in adolescence to make the bones as dense and as strong as possible. Your mother was, however, in that age group who grew up in years of rationing when diet may have been relatively impoverished.

In addition, perhaps her exposure to sunlight may not have been optimal (we need this to produce vitamin D, which is essential for calcium to be used by the body). 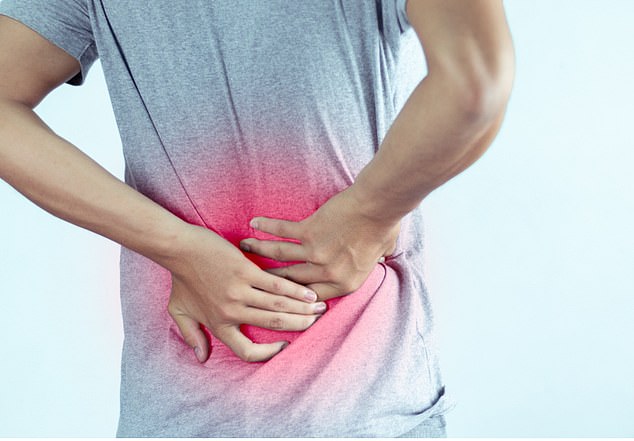 Advice: In exceptional circumstances, surgery may be needed to move the trapped nerve, but, most commonly, the patient will be offered supportive care, such as physiotherapy

If she has an osteoporosis-related fracture, your mother may be prescribed calcium and vitamin D supplements to take daily, to try to prevent further injury.

She may also benefit from bisphosphonate, which will provide small improvements in bone density that make a big difference in terms of symptoms in the future. The second possible diagnosis — and it might be that there is a combination of both — is degenerative disease of the lower part of the spine.

This is caused by an interplay of osteoarthritis of the facet joints, the buttresses that support either side of the spine, and thinning of the discs that act as shock absorbers in the spine.

This degeneration could also account for the pain and even the trapped nerve mentioned by the osteopath.

In exceptional circumstances, surgery may be needed to move the trapped nerve, but, most commonly, the patient will be offered supportive care, such as physiotherapy.

It would be quite wrong — and, in my view, unethical — to say that, at your mother’s age, she should merely be treated with painkillers and rest, or even anti-inflammatory drugs, and not investigated further.

A specialist could do a full assessment, including MRI scans and possibly a bone-density scan, to assess any degree of osteoporosis. I urge you to ask her GP for a referral.

Only with a precise diagnosis can the correct treatment be applied and plans made to restore her to healthy function, including the four-mile walks you say in your longer letter she so used to enjoy.

IN MY VIEW: MMR jab should be celebrated, not shunned

One Sunday evening 50 years ago, as a 19-year-old, I crouched in front of our small black-and-white TV set to photograph the quite incredible images of man walking on the Moon.

This month’s celebrations of the Moon landing brought to mind those pictures, and also made me think of the astonishing advances in medical technology I’ve had the fortune to witness.

Advances in scanning — from ultrasounds, to CT scans and MRIs — have revolutionised diagnosis.

Coronary artery bypass surgery freed countless patients from the pain of angina (one of mine was only the 23rd in the world to benefit), while the development of keyhole surgery has aided plenty more.

We saw the arrival of the first effective drug for stomach ulcers (cimetidine) and the first successful antiviral agent (acyclovir for cold sores and shingles). We’ve gone from sequencing the human genome to attempting to rewrite DNA to fight disease.

And, today, research into our gut bacteria is opening the possibility of new treatments for everything from obesity to Alzheimer’s.

There’s no doubt that the doctors of my generation, and our patients, have lived through a golden era.

Yet we must not be complacent: measles is back with a vengeance. This common viral infection that has no known treatment can cause deafness and brain damage and may even be fatal.

Science has given us a safe vaccine in the form of the MMR (measles, mumps and rubella) jab — yet, by virtue of human nature, ‘fake news’ and misinformation, some parents are not having their children immunised. The vaccine is an advance, like others, to be celebrated, not shunned.