I was badly concussed by a fall in the snow four years ago and, although a scan was clear, I have been left with bouts of dizziness.

Blood and other tests are OK and I am told I have benign paroxysmal positional vertigo. Can you suggest a treatment? I am 74.

It must be frustrating for you to have suffered from this for four years, especially when the fall itself did not cause any serious injury.

I am pleased to say that, if the diagnosis of benign paroxysmal positional vertigo (BPPV) is correct, then there is a simple, effective treatment that can minimise, or even halt, the recurrent bouts of dizziness.

Medical fact: BPPV is caused by tiny calcium crystals moving about in your inner ear, specifically in the so-called semicircular canals

First, let me explain a little about the condition. BPPV is the most common form of vertigo — ‘vertigo’ in this context does not refer to the fear of heights we often associate with the term, but a spinning sensation, much like the feeling you’d experience as a child after jumping off a roundabout in the playground.

It can often be traced back to a head injury (as in your case) or whiplash, but, in a third of cases, there is no obvious cause. It’s more common in women and the elderly, but each of us has a 2 to 3 per cent chance of developing it in our lifetime.

The symptoms tend to come and go, with episodes of dizziness typically lasting up to a minute at a time. These may be provoked by seemingly innocuous movements, such as rolling over in bed or turning to reach for the seat belt when settling into a car seat.

The bouts can be so severe that they trigger nausea or vomiting, rather reminiscent of the motion-induced vertigo of seasickness.

It can also cause unsteadiness or loss of balance.

BPPV is caused by tiny calcium crystals moving about in your inner ear, specifically in the so-called semicircular canals. These three loop-like structures are integral to our sense of balance and contain fluid and microscopic hairs that detect when the head moves and in which direction, and send that information to the brain.

In BPPV, the calcium crystals normally found in another nearby part of the ear collect in the semicircular canals. There, they roll around as the head moves, tripping the hairs, which then transmit to the brain erroneous information about the head’s position — the feeling of dizziness then ensues. 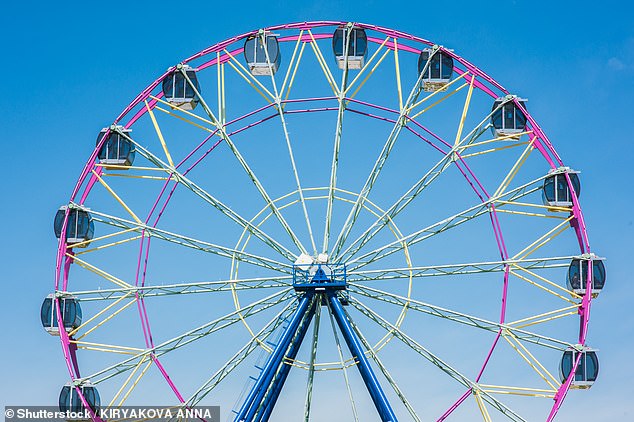 Did you know? BPPV is the most common form of vertigo — ‘vertigo’ in this context does not refer to the fear of heights we often associate with the term, but a spinning sensation

The condition is treated by dislodging troublesome particles from the semicircular canals and sending them rolling back to where they belong.

This is achieved by a series of exercises known as the Epley manoeuvre — developed by Dr John Epley, an American ear, nose and throat expert, some 40 years ago — and can be carried out by an ear specialist, trained physiologist or audiologist in their clinic.

It involves moving the patient’s head through a series of rotations and other positions, both seated and when lying down.

It is a skilled procedure, but harmless, requiring no anaesthetic or medication, and is almost always effective. In fact, studies have shown it to remedy the condition after just one treatment in more than 80 per cent of patients — the remainder may need a second or third treatment to move the crystals.

An alternative you can carry out at home are Cawthorne-Cooksey exercises. You can be taught these by a physiotherapist and, over time, the regimen can be as effective as the Epley manoeuvre.

I strongly advise that you ask your GP about these treatments.

Despite four years having passed since your fall, I believe that there is every reason to be optimistic about resolving your dizziness.

MEN NEED TO WASH THEIR BEARDS TWICE A DAY

The fashion for beards shows no sign of abating, so now comes the question: is this trend having an impact on men’s health?

The conclusion was reached after researchers compared bacterial counts taken from the beards on 18 men’s faces with samples from 30 canines, including dachshunds, collies and German shepherds — and the dogs were found to have lower levels of bacteria.

The initial reason for the study was to explore whether it is safe for dogs to be scanned in the same magnetic resonance imaging (MRI) scanners as humans.

The fact is that, like humans, dogs are living longer and so are prone to more ailments — an MRI scanner is a useful tool, but most vet clinics cannot afford one. So, the researchers were studying whether it might be feasible, in hygiene terms, for dogs to use human MRIs.

The findings might sound alarming: surely we are cleaner than the average dog? But not all bacteria are bad news. Our bodies house nearly 40 trillion organisms (our skin alone has one billion bacteria on every square centimetre). What matters is whether the bacteria found on the dogs or in the beards of men were pathogenic — in other words, a potential health threat.

Of the 18 beards tested, seven did carry potentially harmful organisms. There were fewer on the neck fur of the dogs — the particularly unhygienic part of a dog, according to veterinarians.

But the vast majority of the beard bacteria were perfectly harmless — beneficial, even.

That does not mean abandoning good beard hygiene — which may be as advantageous for the partners of those with a beard, as it is entirely feasible to catch something from a person’s beard.

My advice to anyone who wishes to snuggle up to a bearded partner is to encourage them to wash their face and beard with soap and water twice a day, to help keep bugs at bay.