Recently, my husband was given a memory test by his GP and he failed one question.

I asked the doctor about any potential medications and was told that what was available was little more than a placebo. The doctor also mentioned a memory clinic — can this help my husband?

From what you have said, it appears your husband has mild cognitive impairment (MCI), a spectrum of inevitable changes in cognition that typically occur as part of the ageing process.

Up to 20 per cent of over-65s have some degree of MCI and, as well as memory loss, it may lead to depression, irritability and anxiety. Around 10 to 15 per cent of MCI patients will go on to develop dementia at some point.

Did you know? Up to 20 per cent of over-65s have some degree of MCI and, as well as memory loss, it may lead to depression, irritability and anxiety

When a patient seeks medical help for impaired memory, their GP must initially ask them about their history to assess if there are any reversible causes, such as depression, sleep disturbance or side-effects of medication.

Once these have been ruled out, the patient will be given a brief test to check their cognitive function — usually either the Mini-Mental State Examination (also called the Folstein test) or the General Practitioner Assessment of Cognition.

These are similar tests of short-term memory and consist of questions and tasks, such as telling the doctor a seven-digit number, or a name and address, and then having to recall it a few minutes later.

According to the details in your longer letter, your husband scored poorly on this.

A low score can be an indication of cognitive impairment, so the patient will typically be referred for further investigations.

Often, this involves attending a memory clinic — these are staffed by a doctor, a psychologist and a specialised nurse or occupational therapist, who will work together in order to investigate the cause of the memory problems and provide appropriate information and treatment. 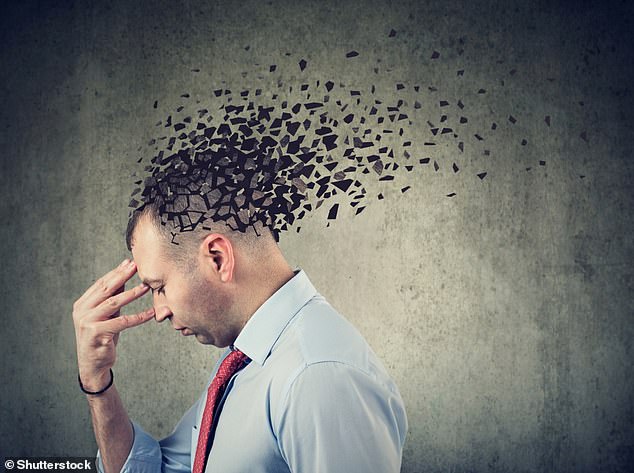 Guidance: When a patient seeks medical help for impaired memory, their GP must initially ask them about their history to assess if there are any reversible causes, such as depression, sleep disturbance or side-effects of medication

Typically, the assessment will involve a brain scan and detailed psychological and blood tests. The clinics per se cannot improve memory — there is insufficient research to give definitive guidelines on how to do this.

And, sadly, no medications or dietary supplements have yet been proven either to help improve memory or prevent its loss in the first place — despite the positive stories you hear about ginkgo biloba and vitamins (the supplements your husband takes, as you set out in your longer letter).

However, we do know that exercise programmes have shown — in small trials — to have some benefit in cognitive function.

And there is more hope on the horizon: for example, research is suggesting that electric brain stimulation — which involves electrodes being placed on the scalp — can improve memory function, although there is much still to learn before this becomes a practical treatment proposition.

Your husband could well benefit from being referred to the memory clinic. Coming under the care of a team of experts of different professional disciplines can only be of value.

IN MY VIEW: Rationing basic ops to save cash ruins lives

In the health service, the pressures on funding are immense. But what people may not realise is the extent to which certain treatments are being rationed, which is reducing quality of life for many.

The restrictions on the treatment for cataracts, for example, are a matter of record: NICE guidelines state that cataract surgery is cost-effective and should not be restricted to severe cases, yet an investigation in The BMJ revealed that, across the nation, patients with cataracts are being screened and denied treatment.

Meanwhile, other forms of rationing are more subtle.

Recently, I was in a taxi heading to the airport when the driver asked me to comment on the painful restriction of movement affecting his shoulder. The pain had deprived him of sleep for many months.

I explained the need for treatment to be based on accurate diagnosis and urged him to see his GP. He said he had an appointment, but that it was not for six weeks — that was the waiting list just to see his GP.

At the airport, I commiserated with a young woman for having such a bad cold she was unable to breathe through her nose. ‘Well,’ she said, ‘my nose has been completely blocked for a couple of years. I am due to have a CT scan in February’ — eight months away.

I told her that I hoped she was suffering only from nasal polyps and that a simple operation would resolve the symptoms.

Her response further shocked me: her consultant had said that if it was nasal polyps, she would not be eligible for treatment, as ‘no one ever died of that condition’.

Have we such an impoverished NHS that quality of life and the ability to breathe well and sleep comfortably are of no consequence? Have we lowered our standards so far?

We hear much about the great advances in medicine, but we must not lose sight of the basics.