ASK THE GP: Will having the shingles jab give us chicken pox?

My husband and I are in our 70s and have been offered the shingles vaccine. Neither of us can remember having chicken pox as a child. Is it possible the vaccine could give it to us?

I understand your caution and actually your concerns are not without foundation: both chicken pox and shingles are caused by the varicella-zoster virus.

Initially, the virus causes chicken pox, an extremely contagious condition. Even touching the skin of an infected person or putting on a piece of clothing worn by them can pass it on. This is why it is unusual, although not unheard of, for people to reach adulthood without being infected.

Worth it? Fewer than 1 per cent will experience side-effects, such as muscle ache, fatigue, headache and fever, but these normally clear up within three days

For children, it is normally mild. For adults, however, chicken pox can be more serious. The itchy blisters and fever tend to have more magnitude, and adults have a far higher risk of developing complications such as pneumonia.

Once the chicken pox infection clears — which normally takes around two weeks — the virus retreats into nerve tissue, where it survives in a dormant state.

If the immune system weakens — whether as a result of age (being over 50 increases the risk), stress, or, for example, having chemotherapy — the virus is able to escape and reappear as shingles, causing a painful, blistering rash and sometimes fever and stomach upsets.

Some will go on to develop postherpetic neuralgia — a severe nerve pain that can last months or even years. In very rare cases it can even prove fatal. So, in short, it is a condition best avoided.

The shingles vaccine is usually offered to those aged 70 and 78. Although it enhances immunity to the virus, the protection is not guaranteed, with a study of 1,000 patients showing it reduces the incidence of shingles by about 50 per cent.

However, if a person develops shingles after having the vaccination, the episode is milder, shorter and far less likely to cause postherpetic neuralgia. It is, in my opinion, a worthwhile vaccination.

It consists of a live form of the virus, albeit one that has been attenuated or weakened, which, when injected, stimulates the immune system to generate long-lasting resistance. 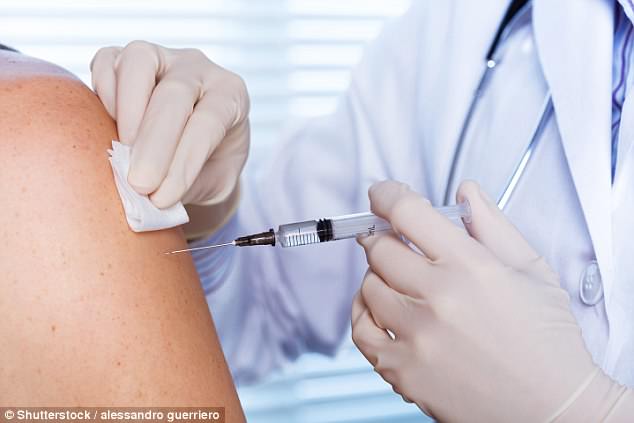 Risk: For adults, however, chicken pox can be more serious. The itchy blisters and fever tend to have more magnitude, and adults have a far higher risk of developing pneumonia

Fewer than 1 per cent will experience side-effects, such as muscle ache, fatigue, headache and fever, but these normally clear up within three days.

However, people with a weakened immune system — such as those on immunosuppressant drugs following transplants — are not permitted to receive a live attenuated virus because they are likely to develop severe symptoms of it, rather than it stimulating the body’s immune response.

So if you are both in good health it is safe, indeed desirable, given the undoubted benefit it offers, to have the vaccination.

My 22-year-old granddaughter has been diagnosed with psoriatic arthritis, which has left her with badly swollen knees and ankles. She was given an injection of high-dose steroids, which for three weeks brought massive relief, but now the pain has returned. Can you give me some idea what the future holds for her?

Psoriatic arthritis is a form of arthritis that can occur with the skin condition psoriasis. The red, scaly patches that psoriasis causes are the result of an overactive immune response, leading to an overproduction of cells.

Up to 30 per cent of those with the skin condition will develop psoriatic arthritis, which usually arrives later than the skin lesions. But in about 15 per cent of patients the skin lesions are seen later, sometimes because it is easy to miss a small patch of psoriasis on your scalp, hidden by hair, for example.

Psoriatic arthritis typically causes inflammation in the knees or in the hands and feet, most often around the joints closest to fingernails or toenails. There may be also what is called dactylitis, when entire fingers or toes are swollen.

Inflammation may affect the joints of the spine — referred to as a spondyloarthritis — and tendons that attach to bone.

Nail changes — again a result of inflammation — occur in more than 80 per cent of patients with psoriatic arthritis, with pitting as well as separation of the nail from the nail bed.

Between 10 per cent and 20 per cent of patients will develop inflammation involving the iris or conjunctiva (the mucous membrane coating) in the eye: look out for symptoms including acute redness and pain in the eye.

As so many different body systems can be affected, early evaluation by a rheumatologist is important, even if initial care has been with a dermatologist.

As the powerful steroids are no longer working for your granddaughter, I think it is now likely she will be treated non-steroid anti-inflammatory drugs by mouth (for example, naproxen 500mg twice daily) and I suspect a disease-modifying, anti-rheumatic drug, such as methotrexate, which suppresses an over-active immune system. This is a tablet given once weekly.

If there is no significant benefit after three months, the next step will be a drug called a TNF inhibitor (there are several, e.g. etanercept and infliximab) that helps suppress inflammation. Etanercept is a weekly injection under the skin, whereas infliximab is given intravenously (via a drip) every four weeks.

Psoriatic arthritis may be a mild disease for some, but it can also cause joint damage, so there is a strong imperative to treat it with effective immunosuppressive anti-inflammatory medication.

I would hope that with the right treatment under expert care, your granddaughter can live a full life without too much impediment from her condition.

IN MY VIEW…WE NEED 24-HOUR GPs

Recent images of people languishing on trolleys in A&E for hours not only demonstrate the human cost of the cracks in NHS emergency provision, but also put the spotlight on an important element of it — the GP out-of-hours service.

It has been 14 years since the huge upheaval in the way GP night and weekend services operate. Prior to 2004, each surgery would be part of a co-operative of GPs who would take it in turn to tend to those who fell ill outside normal surgery hours.

After 2004, GPs were given the choice to relinquish this service, either to a commercial provider or to the local primary care trust. The result is hospitals crammed with people who feel they have no other option but to go to A&E.

To me the answer is clear: improve the funding for out-of-hours care.

The money provided by the Government is set by regular negotiations between the British Medical Association and NHS England.

I had hoped the recent negotiations between these two bodies might have paved the way for an improvement, but there is no relief in sight.

For 2018/2019 there has been a 1 per cent increase in pay for GPs, an uplift in expenses and additional finance to cover the cost of medico-legal insurance, which is spiralling due to growing litigation.

The investment for these changes by NHS England amounts to £256 million, but there are no plans for any change in the way out-of-hours services are to be provided.

Rather than dodge the issue, the Government needs to grasp this nettle, and quickly.