ASK TONY: I’m dying, but Sky refused to help get my affairs in order

I have been diagnosed with terminal cancer, so my husband and I have been working through accounts in my name and putting them in joint names.

We have been Sky customers for many years. As you could not have a joint account, the account is in my name.

However, it provides us with a joint email address for my husband and me, which is linked to all our bank accounts, my elderly mother’s accounts and all our utility services.

I rang Sky several times and finally got to speak to someone when I said it was to register a bereavement.

Ring us when you’re dead: Sky refused to help a terminally ill customer switch her account into her husband’s name

I explained that it was essential to keep the email address, that we wanted all the same services, and that the direct debit would come out of the same account.

I said we needed to put the account in my husband’s name so he has no stress with it when the time comes and he is grieving, as well as continuing to care for my elderly mother.

Sky’s response was: ‘We cannot do that. He has to ring us when you have died and we will sort it out then’.

I asked the man to justify this. He said that powers above him make these decisions, and that my husband can do most actions if he knows the password, but he has to ring when I have died if he wants the account in his name.

I was in tears. I don’t understand why this is such an issue.

Tony Hazell replies: I was horrified when I read your letter. You’re facing up to a terrible situation with immense bravery and practicality, yet have been met with a callous response.

What the hell did this Sky call handler (in the bereavement area, no less) think he was doing? Did he not have the nous to pass your call to someone better able to handle your request?

Sky’s press office leapt into action when I passed on your letter. I believe it was as shocked as I was.

Sky says that while its standard procedure is set up to support customers who are registering a bereavement after it occurs, its customer service teams are empowered to be flexible.

A spokesman says: ‘We pride ourselves on giving agents flexibility to respond to unique circumstances in bespoke ways but unfortunately, in this situation, this flexibility wasn’t employed as it should have been.

‘We are urgently rebriefing our support teams on how to support customers in this situation and we have provided feedback to the customer-service agent who handled Mrs C’s call.’

Sky called you on the day I made contact to apologise and has made the changes you requested. You have been sent some flowers, and a Sky director has made a further call to apologise personally.

It has also made a £250 donation to Cancer Research UK.

The Sky spokesman adds: ‘We are deeply sorry for the experience Mrs C had when she called us to talk about her situation.

‘It was not handled as it should have been and we did not support her in the way we would have hoped to. We have taken action to ensure this situation does not happen again.’ 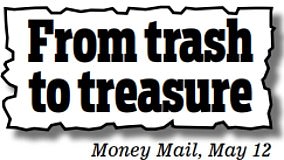 Every week Money Mail receives hundreds of your letters and emails about our stories. Here are some regarding our article on how to how to turn your piles of junk into mountains of money:

Funnily enough, we were going to give our son’s Star Wars stuff to the charity shop but it was shut due to Covid.

My husband put the bits and bobs on Facebook Marketplace and we are now a couple of hundred pounds up.

Twice a year I take my unwanted gifts and clothes to a car boot sale. I usually sell 80 per cent of my stuff and make approximately £100 on each trip.

Getting up early and setting up my stall are the hardest parts. I usually pay a £10 entrance fee. I strongly suggest it if you are having a good clear-out.

Wait for the weather to brighten up and bring your unwanted items to a car boot sale – you will sell them immediately without the hassle of selling online, which is not always easy.

You will also have a nice day out and a chance to chat to people.

In the 1970s, I went to evening classes for upholstery, French polishing, paint effects, flower arranging, china repair and cooking. I have spent my life saving and repairing items. We need to be less wasteful.

I have piles of clothes all over the house that are listed on eBay. They don’t sell immediately but do eventually. My loft is finally almost free of clothing!

I’ve occasionally bought PCs and laptops from the auction room to refurbish and sell, for the fun of doing it.

Others at the same auction room specialise in jewellery, games consoles and even garden ornaments. There’s relatively easy money to be made there week after week.

A pair of £130 shoes I was returning to Farfetch was lost in transit and it won’t refund me. The shoes were collected by Farfetch’s ‘shipping partner’ and scanned at my door.

The last email I received said: ‘Your case is now closed. We do not have any evidence to suggest the previous investigation needs to be reopened.’

Tony Hazell replies: I had never heard of Farfetch. It seems it is an internet operation acting as a go-between for designer brands and customers.

After I made contact, you received an email saying your case had been re-examined and you would receive a refund.

Your case seems very peculiar. You say the return instructions on the email were different from those you received online.

The email said the return label should go into the box, which should be left open.

As a regular internet shopper you found this odd. Nevertheless, someone came to your house at the appointed time, scanned the item and took it.

However, Farfetch insists its courier did not have any vans in your area at the time.

I sniffed a scam, but the company has not come across this before. As we all know, couriers are now photographing our front doors to confirm delivery. I suggest we reciprocate and photograph vans to confirm collection of returns.

E.on switched my suppliers without asking

I have been using E.on for 12 years. Soon after making my first payment I began receiving an additional printed bill for another address.

This was sorted out, but about seven or eight months ago E.on sent a notice saying I was transferring to a different supplier.

I had not initiated this, and tried to tell the firm. Next, my gas account vanished.

The mess continued and I finally became so frustrated that I decided to switch suppliers.

My electricity has been moved, but E.on keeps putting in objections to my gas supply changing.

Tony Hazell replies: E.on says that when your property was built, the developer provided the gas-supplier database with the incorrect address details. E.on has been unable to reverse this error, despite requests.

Details of this have been passed on to your new supplier so that it can update the gas-supplier database.

In December last year I bought a hi-fi system on eBay for around £400. It arrived faulty so I initiated the returns process.

The seller did not reply and then deleted his account. I have tried multiple times to get a refund but eBay has not responded.

Ebay admitted there was an error in processing your refund. I am pleased to say you now have your money back.

I received a letter from the International Fifa World Cup Online Lottery in Melbourne, Australia, informing me I have won £90,000. Is this a scam?

Definitely. If you respond, the crooks may ask you to pay a fee to claim the fictional prize or trick you into handing over your bank details.

They may also share your information with other fraudsters who will bombard you with more mail scams.

My husband of 63 years died suddenly of a heart attack in September.

I have managed to sort out everything in his estate except for the points accrued on his Barclaycard. I feel like I am banging my head against a brick wall.

Barclaycard apologises for the service you received and has offered you £145 – the equivalent of the points on the card if you had exchanged them for vouchers – plus compensation for the inconvenience.

You have also received £25 from the third party that manages the points scheme.

I set up a 12-month payment plan with TV Licensing in November.

After my first £17.50 payment went through, I changed my mind and decided to pay the £157.50 bill in full. But I am still waiting for my first payment to be refunded.

TV Licensing apologises for the length of time it took to refund you. The money is now back in your bank account.