My girlfriend was supposed to fly to the UK from Spain on Boxing Day. As required, we booked a day-two Covid test for her with a company called Lateral Flow Testing.

We paid around £50 for the test, which she would have taken when she landed in the UK.

The test arrived on December 16. But on December 20, my girlfriend received an email from the company saying she had tested positive for Covid-19 and must isolate.

Stranded: A mix-up by Covid-testing company Lateral Flow Testing left a reader’s girlfriend unable to fly to the UK from Spain on Boxing Day

At this point she was still in Spain and the test was at my house, unopened. I emailed the firm several times but I did not receive a reply.

She has now cancelled the trip, meaning we have lost nearly €160.

When the firm finally investigated your case, it discovered the barcode for your girlfriend’s online customer portal was not the same as the one printed on the test you had been sent.

It had been duplicated from another order for a customer who had tested positive.

Lateral Flow Testing told you it has informed Public Health England of the error and refunded the full cost of the test.

I asked the firm if it would refund the cost of your flight, too, but was told the issue was resolved prior to the flight. 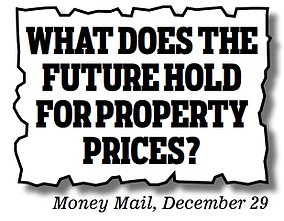 Every week, Money Mail receives hundreds of your letters and emails about our stories. Here are some of the best about our article on what to expect from the property market this year:

The lack of supply to meet the demand isn’t going to be solved quickly. We have too many people and not enough houses, which is why homes will remain relatively expensive.

Inflation is high and the Bank of England has been very slow to raise its base rate.

House prices have been resilient, but if mortgage rates rise significantly then it’s hard to see how prices won’t be affected.

The only people who benefit from increased house prices are those who own many properties and people who are downsizing.

My eldest child moved last year and her home has already risen in value by £36,000.

However, I do not know how my youngest will get on to the property ladder without my help.

My uncle passed away ten months ago. I wrote to his bank, Barclays, to ask for advice twice, but did not receive a reply.

Eventually, I called and was given an appointment at a nearby branch on July 19 by the bereavement team.

After completing the forms and providing my letters of administration documents, I was assured the bank would transfer the legacy (around £20,000) shortly.

But by September 22, I’d still heard nothing, so I called again. I was told the branch employee had not forwarded the forms and he would be reminded.

On November 23, I was told I would be sent new forms to fill in, but I have heard nothing since.

I am 87 years of age, my husband is having chemotherapy for lymphoma and this is becoming just another difficulty.

Tony Hazell replies: It was so disappointing to receive yet another complaint about Barclays’s bereavement service.

There seems to have been some confusion around missing contact details, which meant the bank could not reach you or process the forms — although given how many times you called, I find this a little bewildering.

The good news is that after I got in touch, the bank swung into action and you have now been reunited with the missing money.

You have also been paid an extra £150 as compensation.

I’m being hounded over a mystery £800 bill

I left Together Energy in November 2020.

A year later, I began receiving texts and emails from a company called Credit Resource Solutions, which claims I owe the energy supplier an outstanding payment of £831.95. Yet I never received a bill for this amount.

I contacted Together Energy’s customer service department several times, but was ignored.

In desperation, I emailed the chief executive, Paul Richards. I was then contacted by the finance team, who confirmed they had never sent me a bill.

Tony Hazell replies: Together Energy says a final bill worth £831.95 was created when you left the provider.

However, it admits there was a delay in you receiving this bill owing to an error, for which it has apologised.

Energy watchdog Ofgem’s rules stipulate that providers cannot back-bill customers for costs incurred more than 12 months ago if they have not already informed them of the debt.

But Together Energy told me that it had made you aware of the debt before November 2020.

If you disagree, I recommend contacting the Energy Ombudsman on 0330 440 1624 or visiting: ombudsman-services.org/sectors/energy.