ASK TONY: We moved out after a fire but Scottish Power still billed us

A bad fire at our home forced us to move to other accommodation from October 6, 2019, until December 1, 2020. We informed Scottish Power, so the electricity could be disconnected.

Our house was all electric and we paid £255 per month. We asked that Scottish Power adjust this amount.

In January 2020, it cancelled the payment for one month but, since then, it has taken the full amount.

Each month, we contacted Scottish Power and were promised a review. On December 12, 2020, we were told it would be sorted out.

The debit was stopped for two months but started again in February 2021 at £255. Then staff said it would increase to £319.

We contacted the firm twice more and made the complaint official in March when we were promised a call back which never came.

What’s more, as part of the refurbishment, we installed gas central heating and had informed Scottish Power of this in August 2020.

We are in our early 70s. I have high blood pressure and diabetes and was told I would be a priority case.

Tony Hazell replies: I sent your problem to Scottish Power towards the end of March but it wasn’t until June 17, after much hassling by me, that you finally received a call saying a cheque was in the post! In fact, it was paid into your bank account.

For 20 months, Scottish Power had been dipping into your account despite you telling staff again and again that you were not in the property.

Many would regard that as tantamount to theft.

I was told on May 25 that you had been credited with £3,600 and given £100 compensation — a measly sum given Scottish Power’s appalling behaviour.

But, even then, it was another three weeks until you were finally told that a cheque for £3,528.77 had been issued on June 14 — the difference being between what you owed them and what they owed you.

In your position, I would have cancelled the direct debit long before — though Scottish Power is so hopeless I suspect it may have started debt proceedings.

In a statement, Scottish Power says: ‘We’re sorry for the issues experienced by Mr H and his wife, which stem from the fact we had not removed the meter from our billing database.

‘We’ve reviewed the billing for the period the property was empty, closed down that account and created a new one from the date they got their property back.’ 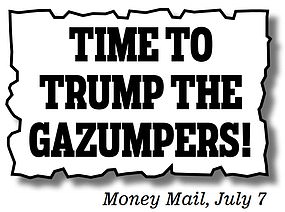 Every week Money Mail receives hundreds of your letters and emails about our stories.

Here are some about the property hunters who missed out on their dream homes after their offers were hijacked by brazen bids.

I sold my house last September and two bids came in after I’d already accepted an offer. However, I rejected both because I would have hated someone to do that to me. The agent told me he was obliged to tell me about the late offers.

Nobody who bids a higher offer is ‘cheating’. If the seller accepts a gazumping buyer, then the seller is morally in the wrong even if it is legal.

We had an offer accepted on a property in May but, a month later, the vendors went to new estate agents who told them it was worth £50,000 more.

We refused to match this and it remains unsold, even after they cut £25,000 off the new price.

There should be a system where you offer the buyer the chance to pay a fee to purchase at an agreed price within a fixed period.

For example, you could pay £100 for the fixed period to be one month and £150 for a two-month period.

I stopped myself getting gazumped while I was on holiday. The solicitor asked the vendor to sign a paper when I made my offer to confirm that they would not pull out.

I recently published Memoirs of A Removal Man, a collection of anecdotes about people moving home over the past 30 years.

Many of these involve gazumping due to the dysfunctional way our housing market has operated for decades.

My wife has breast cancer that has spread. Since we found out two years ago, two weeks before our second child was due to be born, we have been blessed with the fact that through meeting certain doctors my wife is in clinical remission.

Every day really matters to us and we are trying to enjoy life as much as possible. In January, we decided to book a holiday to Thailand as my wife has this on her bucket list.

We booked our flights for £3,366.05 with Qatar Air as it advertised a refundable promise and that you can cancel for any reason.

On March 29, I called Qatar Air to cancel the flights and asked for a full refund.

The reason was that Qatar changed our flight times five times after we booked, and then cancelled one of the connecting flights which would have meant we wouldn’t have been able to return home.

Qatar Air has confirmed I am entitled to a full refund and keeps saying that it has processed the refund, but I still haven’t received our money.

Tony Hazell replies: Qatar Airways processed your refund as soon as I contacted it.

I don’t think Qatar can be held to account for changing flight times when international travel is as uncertain as has been. And, in all honesty, it can take a little time to process refunds.

However, in your circumstances, I understand why you would be so anxious about the money. You do not need further stress in your lives, so I was happy to give Qatar a prod to move things along.

A spokesman says: ‘Qatar Airways has given out more than £1.7billion in refunds due to Covid-19 since March 2020 as we honour our refund policy.

‘We have addressed the hold-up with this particular refund and we are sorry for the delay.’

We do not have a Pin or password to access our Virgin Media account. We cannot call because we do not a number and the letters we have posted since January have been ignored.

Virgin Media apologises for the difficulties you’ve had and has now helped you reset your online account password, updated your memorable word, offered you a monthly discount and added £109.50 credit to your account as a goodwill gesture.

I ordered the wrong engraved wooden wine box for a retiring colleague on Amazon.

I cancelled just moments after paying but have not been refunded the £18.85. I am finding it impossible to contact the firm.

Amazon says you ordered two similar items — one which you cancelled and were not charged for and the second which was delivered and you kept.

You confirmed you did not want a refund on this. The retailer has offered you a gift card and explained how to contact it in future through its Help Page.

For more than 30 years, I have used the same AOL email address. But, for the past couple of months, I have been unable to send or receive any messages. Why has AOL disabled my account?

AOL changed its terms of service and a pop-up box should have asked you to confirm you agree with them — but you were unable to see this message.

Someone from AOL has since been in touch and you are now able to use the account again.

In January, I found £100 cash in a car park. There was no one around, so I handed it in at a nearby Argos.

I left my details and said if the cash remained unclaimed I would like to donate it to charity. But, in June, I received an email saying the matter was closed.

Argos apologises for the confusion and has contacted you to arrange returning the money.

A spokesman says most items are donated to charity if they go unclaimed for more than a month and is looking into what happened here.

During lockdown, my husband decided to further his knowledge of his family history.

We signed up for free trials with Ancestry and My Heritage. We looked briefly at both sites and decided that Ancestry was not for us.

I sent an email to cancel the subscription within the 14-day trial period. However, on December 5, 2020, Ancestry took £69.99 from our account.

We have sent several emails which have not been acknowledged. We are an elderly couple and cannot afford this.

Tony Hazell replies: Unfortunately, Ancestry’s member services could not find a record of your cancellation.

A spokesman says: ‘We regret any concern or confusion this may have caused. We have cancelled the subscription and issued a refund.’