Aspirin ‘cuts risk of cancer by up to half’

A trial involving more than half a million people found long-term aspirin users cut their risk of liver and oesophageal cancer by almost half, while their odds of getting bowel cancer fell by a quarter.

Aspirin, already known to protect against heart attacks and strokes, is thought to block enzymes which help cancer tumours to grow.

The cheap drug was also found to reduce people’s chances of getting leukaemia, lung and prostate cancer, although experts warn it may work less well for women and can cause ulcers and bleeding.

The study, which followed patients for 14 years, was led by the Chinese University of Hong Kong. Lead author Professor Kelvin Tsoi said: ‘The findings demonstrate that the long-term use of aspirin can reduce the risk of developing many major cancers.

‘What should be noted is the significance of the results for cancers within the digestive tract, where the reductions in cancer incidence were all very substantial, especially for liver and oesophageal cancer.’

The research, to be presented at the United European Gastroenterology conference in Barcelona this week, compared the incidence of cancer among more than 400,000 non-aspirin users and more than 200,000 people who had been prescribed the drug for at least six months.

The aspirin users had on average been taking the tablets for more than seven and a half years.

Almost one in six of the patients got cancer, but those taking aspirin regularly were 47 per cent less likely to have been diagnosed with cancers of the liver or oesophagus. Experts also found significant reductions in the rate of stomach cancer (38 per cent), pancreatic cancer (34 per cent) and bowel cancer (24 per cent). 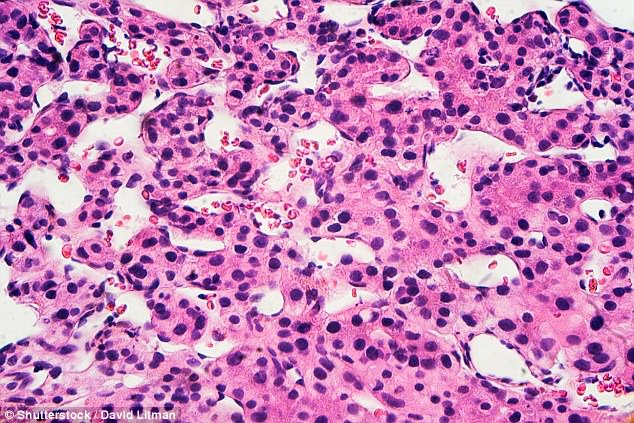 Aspirin  is thought to block enzymes which help cancer tumours to grow. Pictured is an image of  Hepatocellular carcinoma, the most common type of primary liver cancer

Aspirin, which has the side effect of thinning the blood, is believed to block the pathways of ‘COX2’ enzymes in the body. The molecules, which also cause pain and fever, appear to help the body generate the blood vessels needed to support the fast growth and spread of cancerous tumours. They may also help cancer cells multiply and stop the body’s natural defence mechanism which battles cancer by making cancerous cells ‘commit suicide’.

The authors did not find a protective effect for breast, bladder or kidney cancers.

‘It is important to recognise factors that can play a part in prevention and help decrease the number of bowel cancer cases. As ever, we recommend patients consult their physician prior to taking medications.’