WikiLeaks founder Julian Assange met with Rep. Dana Rohrabacher, R-Calif., on Wednesday and told the lawmaker he did not receive the Democratic National Committee’s trove of emails from the Russians.

‘The congressman plans to divulge more of what he found directly to President Trump,’ the statement from the congressman’s office read. 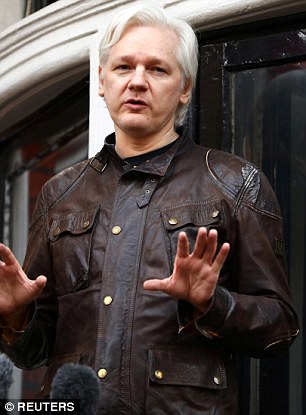 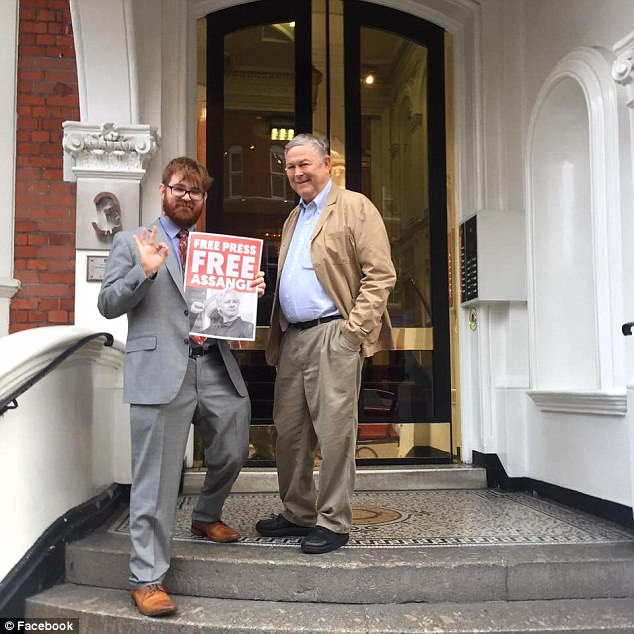 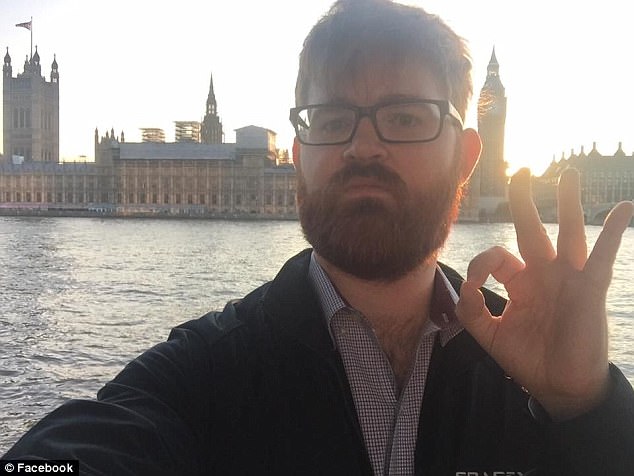 Charles Johnson, photographed during his London visit this week, told the Daily Caller that Julian Assange wanted to meet the GOP lawmaker to work out a deal to avoid prosecution

The statement included a quote from Rohrabacher publicizing that Assange had ’emphatically stated that the Russians were not involved in the hacking or disclosure of those emails.’

The press release noted that ‘Assange’s claim contradicts the widely accepted assessment of the U.S. intelligence community that the thousands of leaked emails, which indicated the Democratic National Committee rigged the nomination process against Sen. Bernie Sanders in favor of Clinton, were the result of hacking by the Russian government or persons connected to the Kremlin.’

Rohrabacher’s office also divulged that the two men discuss the ‘status of WikiLeaks, which Assange maintains is vital to keeping Americans informed on matters hidden by their traditional media.’

Rohrabacher is the first U.S. lawmaker to meet with the WikiLeaks head.

Johnson told the Daily Caller that Assange wanted to meet the Republican lawmaker in order to strike up a deal to avoid prosecution for publishing classified documents given to him by NSA leaker Edward Snowden.

In April CNN reported that the Justice Department was planning to arrest Assange over his role in allegedly aiding Snowden with his document dump.

The head of the CIA, Mike Pompeo, has also blasted WikiLeaks for aiding Chelsea Manning in her document theft.

Pompeo said in April that WikiLeaks ‘directed Chelsea Manning to intercept specific secret information, and it overwhelmingly focuses on the United States.’

‘It’s time to call out WikiLeaks for what it really is: A non-state hostile intelligence service often abetted by state actors like Russia,’ Pompeo said during remarks in fron of the Center for Strategic and International Studies.

In the statement from the congressman’s office, Assange is called a ‘fugitive’ who is ‘living under the protection’ of the Ecuadorians, not a criminal wanted by the government of the United States.

Rohrabacher is also friendly with Russia.

Veselnitskaya was representing the group that hosted the event, which took place the same month in 2016.

DailyMail.com published an email from a Rohrabacher intern inviting Congressional staff to the screening, behind held at the Newseum, a news museum located several blocks away from the Capitol Building.

While two of the California congressman’s aides attended the event, a spokesperson for the lawmaker said the office was not aware of the invitations being sent.

Communications Director Ken Grubbs told DailyMail.com, ‘Our staff was not asked to help out. Two of our staffers went to the event, one stayed for the screening after the reception.’

And while staffers ‘crossed paths with [Veselnitskaya] at a screening of the Magnitsky film. Nothing of substance was discussed.’

Two months earlier, Rohrabacher had traveled to Moscow, leading a congressional delegation, according to the Atlantic, in which he was handed materials that were critical of the Magnisky Act.

In November 2016, Politico wrote a story headlined, ‘Putin’s Favorite Congressman,’ pointing out that Rohrabacher had received those materials straight from the Russian government to further Russian President Vladimir Putin’s agenda.

While Rohrabacher’s Russia ties have riled the State Department and his Republican colleagues ‘in Trump’s Washington, he could fit right in,’ Politico wrote.