An assistant police chief in Kent, Washington, was given a two-week suspension and ordered to take ‘cultural sensitivity training’ for displaying a sign that glorifies Nazi Germany at work.

Derek Kammerzell was disciplined last July for hanging the insignia of Schutzstaffel Opergruppenfuhrer – one of the Third Reich’s highest ranks – on his office door in September 2020, according to an internal report obtained by DailyMail.com.

An investigation by a Washington law firm also included allegations that the veteran cop once showed off a photo of himself wearing lederhosen and sporting an Adolf Hitler-style mustache.

On another occasion, he allegedly boasted about raising his hand in a ‘hail Hitler sign’ as a joke while posing with a public figure, the report said.

The findings were obtained through a freedom of information request by local watchdog group No Secret Police, which shared the documents with DailyMail.com.

In his notice of disciplinary action for hanging the Nazi propaganda, police Chief Rafael Padilla gave Kammerzell the option of taking an unpaid leave or using his paid vacation time.

The department’s top cop also said he ‘tempered’ his decision with the fact Kammerzell – a 27-year veteran of the force – had no disciplinary history and ‘above-satisfactory performance reviews.’

Kammerzell told investigators the insignia was related to the The Man in The High Tower, a TV series that examines what the world might have been like if the Nazis had won the Second World War.

He said he adopted the nickname ‘Obergruppenfuhrer’ after colleagues began referring to him by the German name that translates into ‘senior group leader.’

Kammerzell claimed that at the time he hung the image, he didn’t know it was a Nazi rank and instead thought it represented his position as a high-ranking cop with German lineage.

He denied ever praising Nazis or fascism. 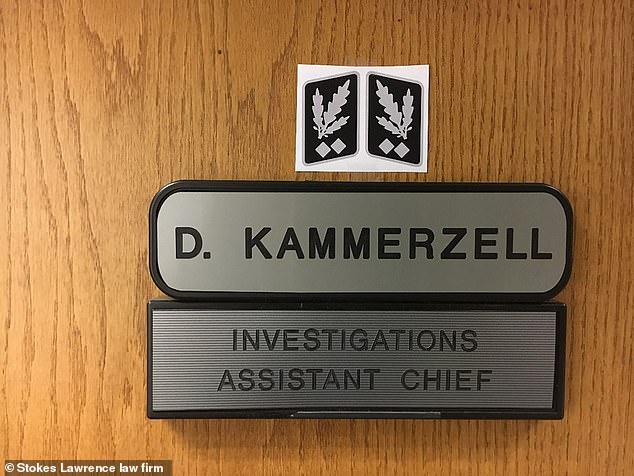 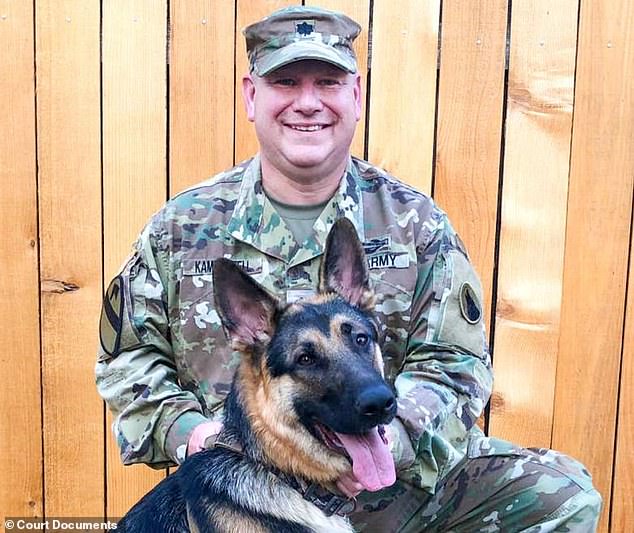 Kammerzell told the investigator that he did joke ‘more than once about his grandpa dying during the Holocaust by getting drunk and falling off the guard tower.’

But he denied claims by a colleague that he once bragged about giving a ‘heil Hitler’ salute. The claim likely stemmed from a joke he made while posing with Kent’s mayor during Oktoberfest in 2019, he said. 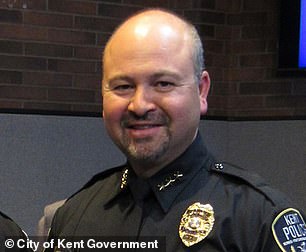 He recalls saying:  ‘Hey, you want to be seen with a German guy in lederhosen with our hands raised up?’

He said claims he once bragged about wearing a Hitler mustache are related to various styles he pictured himself sporting during ‘Movember,’ when men grow their facial hair to raise money for prostate cancer.

But the lawyer investigating the case didn’t buy all of his excuses, including the claim he wasn’t aware of Opergruppenfuhrer’s Nazi connection.

‘It is not plausible that after watching The Man in the High Castle and Googling “Obergruppenfuhrer” [that] Assistant Chief Kammerzell would not understand the Nazi affiliation,’ the report said.

‘First, Assistant Chief Kammerzell described the results of the Google search he performed, including the symbol that appeared, that it translated to “senior group leader,” and that it included NATO equivalent and non-equivalent rankings. I searched “Obergruppenfuhrer” on Google, and provide a screenshot of the search results below.’

A Google search of the word yields a plethora of results related to the Nazi rank. 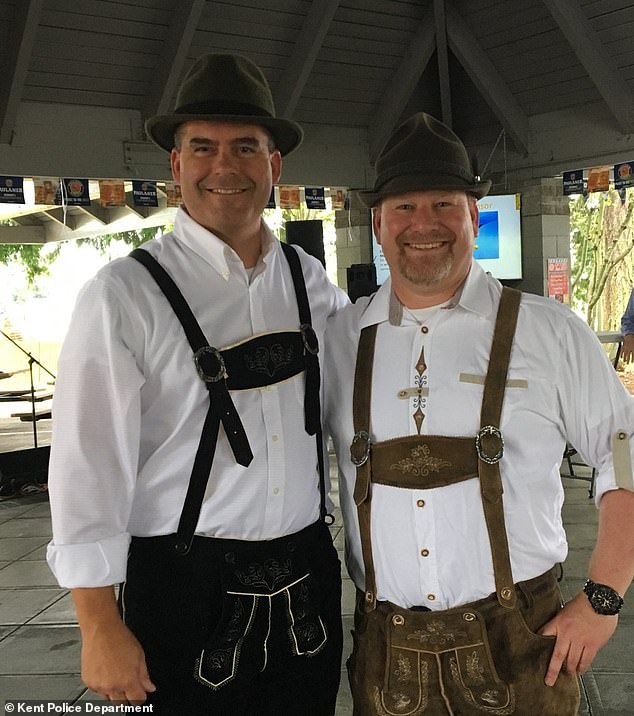 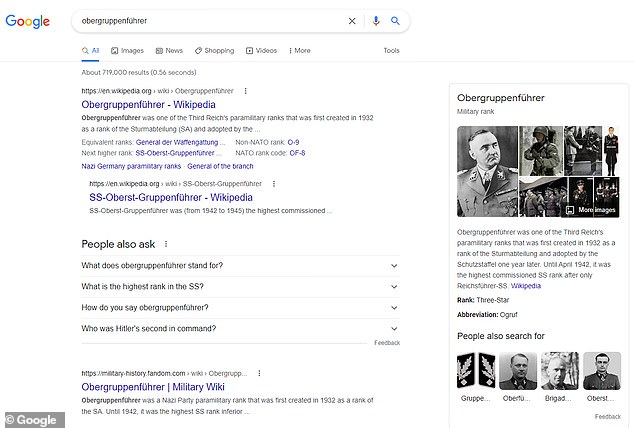 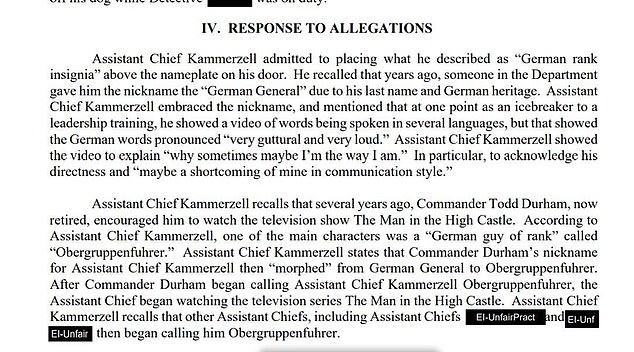 Kammerzell told investigators the insignia was related to the The Man in The High Tower, a TV series that examines what the world might have been like if the Nazis had won the Second World War

The City of Kent said in a statement that it hired two law firms to investigate claims against Kammerzell, and believes the two-week suspension was an appropriate outcome based on legal advice and labor laws.

‘The City of Kent and Kent Police Department condemn racism in all its forms and are committed to investigate and, when necessary, impose appropriate discipline for every violation of our values and policies.’

The city said he has apologized and has ‘fulfilled his responsibilities in full compliance with the department’s values and policies’ since returning to work.