Assistant principal, 40, charged for having sex with 16-year-old boy gets two years probation

Missouri assistant principal, 40, who was charged for having sex with 16-year-old boy multiple times gets two years probation

An assistant principal in a Missouri school was sentenced to two years probation after she was charged with raping and sodomizing a 16-year-old student.

Elizabeth ‘Beth’ Giesler, 40, was fired from her job as assistant principal at Ste. Genevieve Middle School in Ste. Genevieve Township in eastern Missouri, about 45 miles south of St. Louis, in May 2018.

This week, however, Giesler was given unsupervised probation as part of a deal with prosecutors in which she entered an Alford plea to one count of second-degree harassment.

As part of the plea bargain, Giesler is required to surrender all of her teaching credentials, according to Daily Journal.

Had the case gone to trial and resulted in a conviction on all counts, Giesler could have faced a maximum of more than 30 years in prison.

Elizabeth ‘Beth’ Giesler, 40, agreed to forfeit her teaching certificate and promise never to teach again in Missouri in exchange for two years of unsupervised probation

When a defendant enters an Alford plea, they acknowledge that there was enough evidence to find them guilty should the case go to trial. An Alford plea is not an admission of guilt.

According to the St. Louis Post-Dispatch, a 16-year-old student at Giesler’s former school told investigators that she performed a sex act on him at her home sometime between April 7 and 8 of 2018.

The student told authorities that they engaged in sexual intercourse and sex acts twice between April and May. These alleged encounters also took place in her home.

The boy was staying with Giesler and her family at their residence. A friend of the boy told school officials that he revealed the sexual contact with Giesler.

He said that several factors weighed into his decision to agree to a plea bargain.

‘Number one was the fact that the defendant doesn’t have any prior criminal history whatsoever.

‘I also took into consideration in extending this recommendation on misdemeanor harassment that it was conditioned upon her giving up her teaching credentials,’ he said. 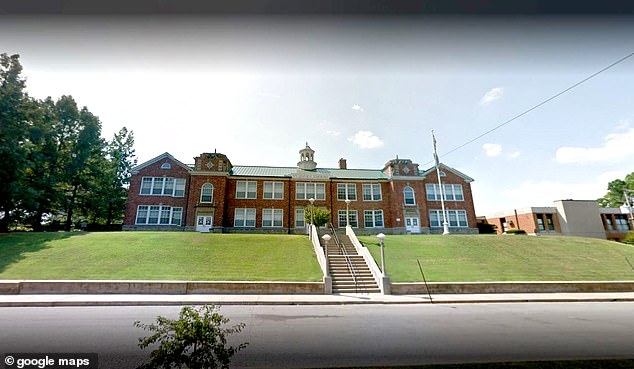 She was as assistant principal at Ste. Genevieve Middle School in Ste. Genevieve Township in eastern Missouri when police say she had at least three sexual encounters with a 16-year-old boy

‘And part of my thinking on that was, “OK, I’m trying to help this victim and looking at helping other potential victims if she remained in her employment status.”

‘I think that it was a priority for me as a prosecuting attorney looking at other potential victims she might encounter.’

Williams said that the odds of Giesler harming another child are slim since she will never be allowed to teach in Missouri again.

‘Some people might not understand the bargain that was struck in this case unless they really understand what she had to give up voluntarily to get that bargain,’ Williams said.

He added: ‘That was basically her livelihood, and she had to surrender that.’