Associated Newspapers has apologised in court to the Conservative peer Lord Mohamed Sheikh for alleging that he ‘rubbed shoulders’ with people with antisemitic or extremist views.

The story, published on MailOnline in August 2018, focused on Lord Sheikh’s attendance at a conference in Tunisia in 2014, where Jeremy Corbyn had participated in a wreath-laying ceremony.

The article categorised the Tunisian event as a ‘conference of hate’ and accused the peer of ‘rubbing shoulders with Islamists, hate preachers and Holocaust deniers for years’.

It reported that two Conservative MPs, Robert Halfon and Zac Goldsmith, had demanded an investigation into Lord Sheikh’s attendance.

Lord Sheikh has been engaged in the promotion of inter-racial and inter-faith understanding, tolerance and respect both before and since his 2006 appointment as a life peer 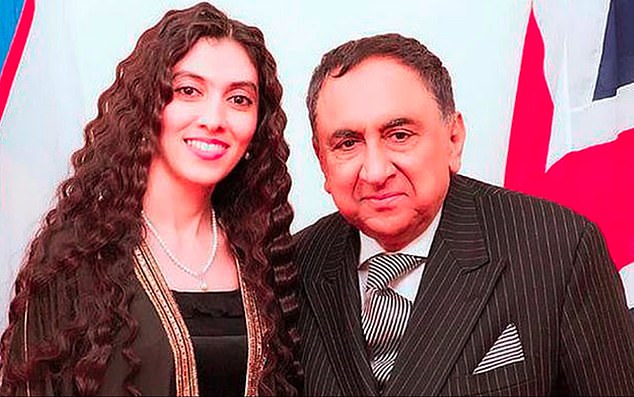 Lord Sheikh, right, and his wife Guli Moradova, left, whom he married in 2018

The Tory grandee, who both before and since his 2006 appointment as a life peer has been actively engaged in the promotion of inter-racial and inter-faith understanding, tolerance and respect, found the article deeply distressing.

This was especially the case as he supports a wide range of charitable and humanitarian causes, both Muslim and non-Muslim, several of which he is a patron, and is a member of the All-Party Parliamentary Group against Anti-Semitism.

Although Lord Sheikh did attend the conference in Tunisia, the speech he delivered advocated that to achieve a lasting peace, a two-state solution should provide for security for the State of Israel and respect for the rights of Palestinian people.

This was in line with the policy position of the British Government. Lord Sheikh played no part in the wreath-laying ceremony attended by Mr Corbyn, and was not aware of it until it was reported by the Daily Mail.

In November 2018, the Conservative Party’s independent Code of Conduct panel dismissed the complaint brought by Mr Halfon and Mr Goldsmith, though the original article remained online.

Last year, Associated Newspapers notified Lord Sheikh that the story had been removed, and offered to publish a correction and apology and to pay compensation as well as legal costs. That offer was accepted by Lord Sheikh.

Associated Newspapers and MailOnline accept that the very serious allegations which were published about Lord Sheikh were untrue and have undertaken not to repeat them.

In recognition, the Conservative peer is content to let the matter rest and considers his reputation fully vindicated.