Asteroid that skimmed past Earth on Friday has TWO moons

On September 1, a massive asteroid measuring roughly 2.8 miles wide skimmed past Earth at just 4.4 million miles away, or 18 times the distance between our planet and the moon.

While it might sound far away, NASA says it’s the closest an asteroid of this size has come since it first began tracking near-Earth objects.

Radar images captured during the August 29-Sept 1 flyby have now uncovered new details on the huge space rock, dubbed ‘Florence’ – and, they’ve revealed the asteroid has two small moons orbiting it. These can be seen as the small bright streaks in the images above

Asteroid Florence was first spotted in 1981, and is estimated to be 2.7 miles (4.4 kilometers) wide.

It will fly past Earth at a distance of about 4.4 million miles (7 million kilometers), or about 18 Earth-moon distances.

This is the closest an asteroid this large has come since NASA began its NEO-tracking program.

The flyby in September will be the closest it’s come to Earth since 1890.

For astronomers, the close pass was an unprecedented opportunity to study it through ground-based radar observations.

As nearly two-thirds of near-Earth asteroids are known to have a satellite, NASA suspected Florence would have a partner as well.

But, they found it has not one, but two moons circling it.

‘The sizes of the two moons are not yet well known, but they are probably between 100-300 meters (300-1,000 feet) across,’ according to NASA’s Center for Near Earth Object Studies (CNEOS).

‘The times required for each moon to revolve around Florence are also not yet known precisely but appear to be roughly 8 hours for the inner moon and 22 to 27 hours for the outer moon.

‘The inner moon of the Florence system has the shortest orbital period of any of the moons of the 60 near-Earth asteroids known to have moons.’

The radar images also revealed new details on asteroid’s surface features, and confirmed that it is about 4.5 km (2.8 miles) in size.

While it’s mostly round, the scientists have spotted a ridge along the equator, giving it a somewhat lumpy appearance.

The asteroid, named for Florence Nightingale, was first spotted in 1981, and the flyby in September will be the closest it’s come to Earth since 1890

It also has at least once large crater and two large flat regions.

The data collected by the Goldstone Solar System Radar in California and at the National Science Foundation’s Arecibo Observatory in Puerto Rico could reveal more surface detail, and allow scientists to better estimate the orbital periods of the two moons.

‘While many known asteroids have passed by closer to Earth than Florence will on September 1, all of those were estimated to be smaller,’ said Paul Chodas, manager of NASA’s Center for Near-Earth Object Studies (CNEOS) at the agency’s Jet Propulsion Laboratory. 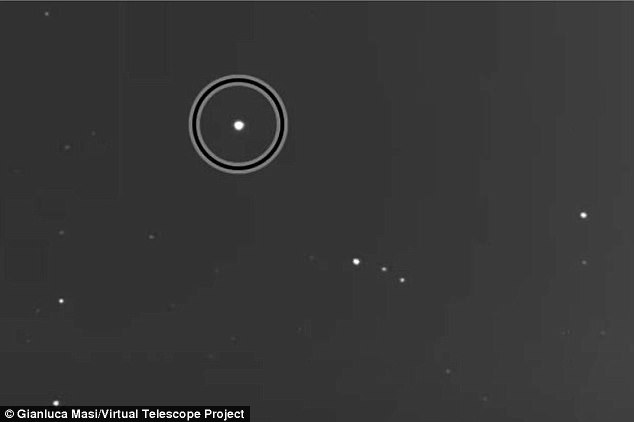 The big asteroid 3122 Florence, as seen by the Virtual Telescope Project on Aug. 30, 2017 — two days before its closest approach to Earth

‘Florence is the largest asteroid to pass by our planet this close since the NASA program to detect and track near-Earth asteroids began.’

The asteroid, named for Florence Nightingale, was first spotted in 1981, and the flyby in September will be the closest it’s come to Earth since 1890.

It was first discovered in Siding Spring observatory in Australia by asteroid hunter Schelte J Bus on the night of 2 March 1981 and orbits the sun once every 859 days.

‘Lots of these Earth-approachers are only visible for a matter of hours in amateur scopes before they precipitously fade from view’, according to Bob King writing in Sky & Telescope. 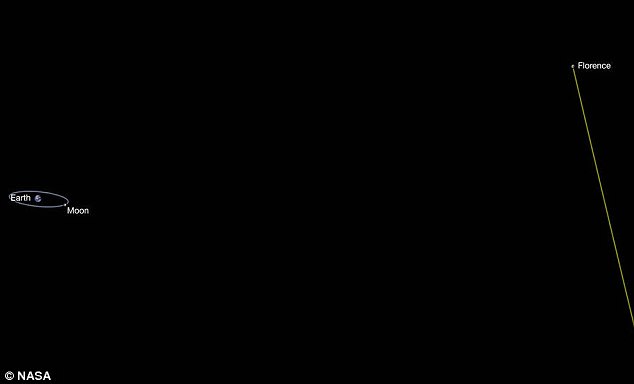 While it may sound alarming, NASA says asteroid Florence will safely fly past Earth at a distance of about 4.4 million miles (7 million kilometers). It’s not the closest encounter our planet has seen with an NEO, but for this distance, the experts say it is the largest

‘They’re just so tiny and move so fast. Not Florence. It’s neither tiny nor in a terrible hurry. Matter of fact, it’s a beast’.

‘Some of you will be able to pick it up in binoculars, and anyone with a 4-inch or larger telescope should kill it.’

Next month, Earth is set for another close flyby. 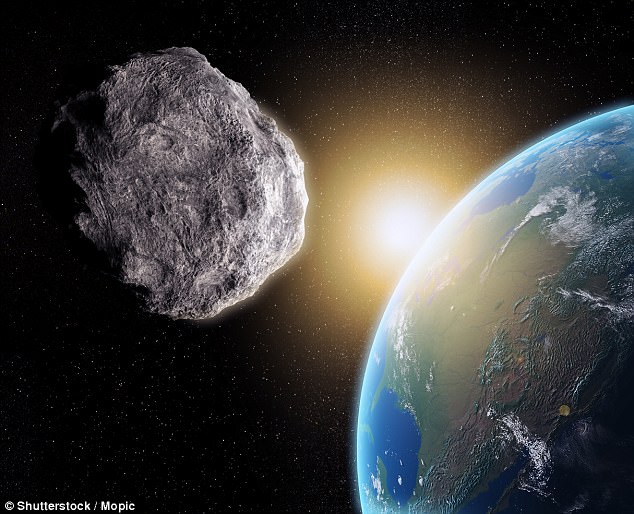 The asteroid, named for Florence Nightingale, was first spotted in 1981, and the flyby in September will be the closest it’s come to Earth since 1890 (stock image)

According to ESA, an asteroid the size of a house will narrowly skim past our planet in October.

It was recently spotted by scientists for the first time in five years.

The asteroid, dubbed 2012 TC4, first flitted past our planet in October 2012 at about double the distance of its next expected pass, before disappearing.

Now the European Space Agency (ESA) has tracked down the giant hunk of rock, which is about 15 to 30 metres (49 to 98 feet) long and roughly the size of a house.

TC4’s next approach, predicted for October 12, will bring the massive object ‘damn close’, according to experts, when it flies inside the moon’s orbit – just far out enough to miss our geostationary satellites.