Asteroids lurking between Earth and the sun but hidden by our star’s glare may help to shed light on the history of the solar system, a scientist believes.

Astronomer Scott Sheppard, from the Carnegie Institution for Science in Washington DC, says the discoveries of near-Earth objects (NEOs) are only just beginning.

This is because telescopes tend to look away from our planet so they can avoid the glare of the sun; however, new surveys peering in the other direction are revealing more NEOs – including never-before-seen asteroids.

Sheppard and other experts say finding and tracking these space rocks could be vital in helping improve our understanding of planet formation and the solar system’s history.

‘New telescopic surveys are braving the sun’s glare and searching for asteroids toward the sun during twilight,’ Sheppard wrote in a column in the latest Science journal.

‘These surveys have found many previously undiscovered asteroids interior to Earth.’

Asteroids lurking between Earth and the sun but hidden by our star’s glare may help to shed light on the history of the solar system, a scientist believes (stock image)

What is a ‘potentially hazardous’ asteroid?

A potentially hazardous asteroid (PHA) is an asteroid whose orbit comes nearer than 0.05AU (about 7.5 million km) to the Earth.

The International Astronomical Union claims there are around 1,500 potential hazardous asteroids.

Although these are not a risk to Earth as of yet, asteroid this large have the potential to cause devastation if they were to land on our planet, especially in highly-populated areas.

The discoveries include the first asteroid with an orbit interior to Venus – named ‘Ayló’chaxnim 2020 AV2 – and the asteroid that currently has the shortest-known orbital period around the sun, which is called 2021 PH27.

Modelling had predicted that these space rocks should exist but now telescopes are actually beginning to confirm their presence.

Among the observatories are the Zwicky Transient Facility camera in California and the National Science Foundation’s Blanco 4-metre telescope in Chile.

They are categorised based on their position in our solar system — for example, Atiras orbit interior to Earth and Vatiras interior to Venus.

In 2026, the US space agency’s Near-Earth Object Surveyor space telescope (NEO Surveyor) is due to launch to help detect more of these asteroids.

It will be positioned between the Earth and sun to better spot space rocks that right now cannot be seen because of their positions in space.

According to NASA-funded experts, some asteroids can ‘sneak up’ on us thanks to a quirk of the Earth’s rotation that makes them seem like they are barely moving — making them hard to detect.

The scientists investigated how telescopes nearly missed a 328-ft-wide asteroid that came within 43,500 miles of Earth back in 2019.

The space rock, dubbed ‘2019 OK’, was the first object of its size to get that close to our planet since 1908 — but it was only spotted 24 hours before its closest approach.

The reason, the team determined, is because it was moving towards us in such a way that its motion across the night sky was counteracted by the Earth’s spin.

Thus – to early warning systems like Pan-STARRS1 at Hawaii’s Haleakala Observatory – 2019 OK looked stationary, so did not set off the automated detection software.

In fact, the experts said, up to half of asteroids approaching Earth from a danger zone east of ‘opposition’ likely undergo periods of such apparent slow motion.

This means that half of these asteroids could presently also be difficult to detect – and computerised telescopes will need to be updated to take account of the effect.

Scientists think that most NEOs are asteroids that have been dislodged from the main belt between Mars and Jupiter.

However, Sheppard believes there might also be stable inner reservoirs of NEOs that replace asteroids that spin out into the wider solar system, crash into a planet, or get obliterated by the sun. 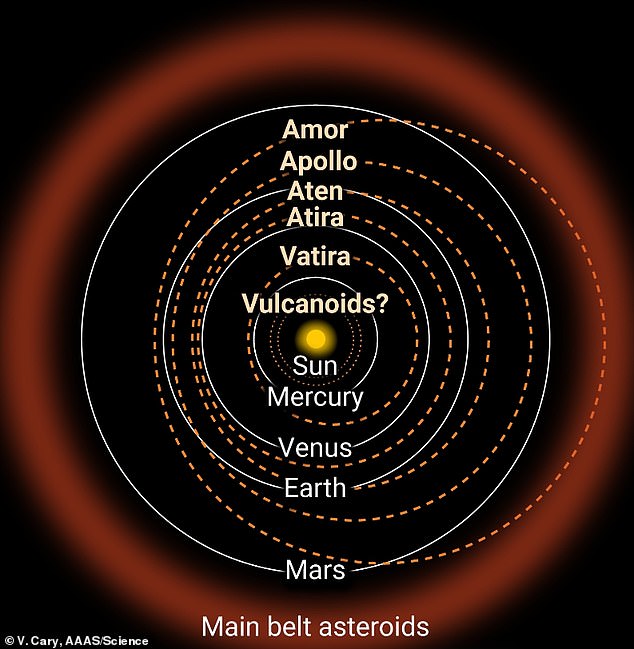 Asteroids are categorised based on their position in our solar system. For example, Atiras orbit interior to Earth and Vatiras interior to Venus (pictured above)

Scientists know that the numbers of NEOs have been steady over the last few billion years – having observed craters on planets and moons – but the fact they have such unstable orbits and unpredictable movements caused by the sun suggests they are being replenished in some way.

‘The movement depends on the asteroid’s rotation, size, albedo, and distance from the sun,’ Sheppard wrote.

‘The smaller an asteroid is and the more sunlight it absorbs, the larger its movement.’

The discovery of NEOs should help scientists to understand more about their movement, and how their numbers have managed to stay steady over such long periods of time.

Experts believe that around 90 per cent of the so-called ‘planet killer’ NEOs – those just over half a mile (1km) or more across – have already been found.

‘The last few unknown 1-km NEOs likely have orbits close to the sun or high inclinations, which keep them away from the fields of the main NEO surveys,’ Sheppard added.

The perspective was published in Science.