Aston Villa have lost a second member of their coaching team in less than three weeks with Richard O’Kelly announcing his departure less than 48 hours before their opening game of the season.

After former England captain John Terry left his role on manager Dean Smith’s staff on July 26, to pursue a career in management, Smith’s long-time assistant O’Kelly has followed him out of the door.

Villa’s official statement gave no explanation for O’Kelly’s choice, saying simply that he had ‘decided to leave’.

Aston Villa have not given a reason why Dean Smith’s assistant, Richard O’Kelly, has departed

Sportsmail understands that with O’Kelly and Terry now gone, Smith will look to add to his coaching team, with candidates who have experience of overseas football – rather than the traditional English No 2 – of particular interest. O’Kelly had moved from Brentford with Smith when he took the Villa Park post in October 2019.

The club had always expected Terry to go at some stage as they knew his desire to follow his former Chelsea and England team-mate Frank Lampard into management, and never planned to stand in his way when the time came.

Yet O’Kelly’s move comes with Smith in the final stages of preparation for Saturday’s Premier League meeting at Watford, with Villa having sold captain Jack Grealish to Manchester City for £100million and spent the money on playmaker Emiliano Buendia and forwards Leon Bailey and Danny Ings. 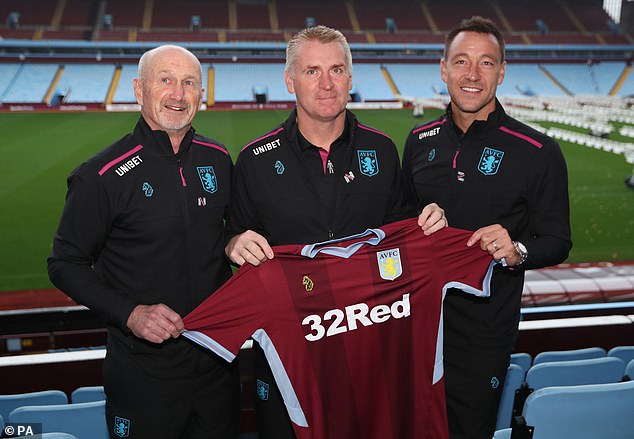 It is thought that while O’Kelly played a valuable role for Smith, he was not as prominent as he had been when the club won promotion in 2019, and in their first campaign back in the top flight.

In a statement posted on Villa’s website, Smith said: ‘Richard has worked with me for the best part of a decade and we have always had a really close relationship. We are friends as well as colleagues and I will miss him.’

Smith brought Craig Shakespeare, who worked with Claudio Ranieri when Leicester won the title in 2016, as he wanted more Premier League experience on his staff. Earlier this month, Smith also added Austin MacPhee as a specialist set piece coach.