Theresa Government was accused of trying to cover up allegations that a Tory MP fondled a female aide’s breasts after they drank champagne.

A Tory Whip is said to have told the MP, Charlie Elphicke, that the Party had destroyed the official record of the complaint.

The woman withdrew her accusations of sexual harassment after she was paid wages she said she was owed, and Mr Elphicke was told at a meeting attended by current Chief Whip Julian Smith and a fellow Whip that the documents had been ‘destroyed’. It was the second Whip who made the alleged remark.

Chief Whip Julian Smith leaving Downing Street. He told Charlie Elphicke that he was suspended following allegations made against him

However, months later, Mr Smith, newly promoted to the Cabinet, suspended Mr Elphicke and reported him to police following a separate claim of rape against the Dover MP.

But when police interviewed the politician last month, they made no mention of rape. Instead, they asked about the alleged breast fondling and a claim by a third woman that he ‘lunged’ at her.

Mr Elphicke denies the claims and has not been arrested. Friends say he had been ‘badly treated’ by Mr Smith. ‘Julian is trying to protect himself and Charlie’s reputation has been trashed,’ said one.

Elphicke is said to have ‘fondled breasts’ of ex-aide in his office one spring evening in 2016 after they drank a bottle of champagne between them, and on another day ‘touched her leg’ in his car.

Denial: Elphicke says he spent the evening in question at supper with his mother and has emails to prove it. Denies leg touching, and says she travelled in his car again later the same day.

Denial: Elphicke denies ‘lunge’ and says she kept inviting him to socialise after incident, signing a text with a friendly ‘X’. Drinks were to let her down over job offer.

Chief Whip Julian Smith suspended Elphicke in November 2017 over ‘serious allegations’. Sources say it was over alleged rape of a third woman – and not linked to Claim One as previously reported.

Denial: Elphicke denies it. Sources say police quizzed him over Claims One and Two on March 12 – but made no mention of the rape claim.

Senior Tory MP Bob Stewart said: ‘It is absolutely appalling that Charlie has lost the whip for nearly six months. This matter should have been resolved long ago.’

But one of Mr Smith’s allies said: ‘Once there had been a rape allegation, he had to report it to police. It is not true he tried to cover up any complaint. He has acted with complete integrity.’

A source close to the Chief Whip said: ‘Julian did not say he would destroy any files and was not in charge of the case. No files were destroyed.’

However, the disclosures are likely to focus attention on how the Tories initially handled the first complaint.

The Mail on Sunday can today reveal what police told married father-of-two Mr Elphicke, when they interviewed him last week.

The first allegation came from a former female employee who claimed he had fondled her breasts after they drank champagne in his office one evening in the spring of 2016. She also claimed he touched her leg after he gave her a lift to his constituency. 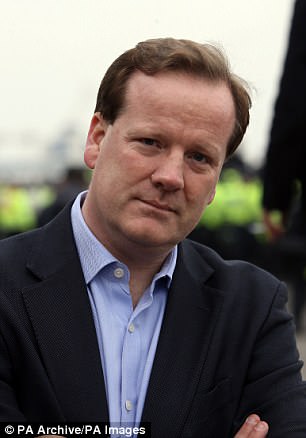 Charlie Elphicke, the MP for Dover, has denied the claims made against him

Mr Elphicke denied fondling the woman’s breasts and said he spent that evening having supper with his mother – and had emails to prove it. He admitted having champagne with her in his office on another day in spring, but again denied groping her.

The second complaint came from a female lobbyist who claimed he had ‘lunged’ at her in a Commons lift three years ago after they had drinks in Parliament’s Pugin Room.

The 47-year-old MP again denied the allegation and said the way the woman stayed in touch with him after the alleged incident, signing off at least one text message with a friendly ‘X’, undermined her claim.

Mrs May was dragged into the controversy after it emerged that Mr Smith told Mr Elphicke the decision to suspend him in November was taken with her full support. At the time, Westminster was engulfed in multiple claims of sexual harassment and bullying by MPs.

Michael Fallon had to resign as Defence Secretary after it emerged that years earlier he had tried to kiss a female journalist and touched the knee of another.

In the subsequent reshuffle, Mr Smith was promoted to Chief Whip. Within 24 hours he suspended the whip from Mr Elphicke, saying ‘serious allegations’ against him had been given to police. Furious Mr Elphicke denied it and accused Downing Street of tipping off the BBC before informing him.

At the time, it was said Mr Smith reported Mr Elphicke to police as a result of allegations the party had received a year earlier, but initially decided not to act.

This newspaper was told yesterday by senior sources that in fact, Mr Smith reported Mr Elphicke to police because he had been informed of a rape claim.

However, when Mr Elphicke, who has always denied any wrongdoing, was interviewed by police on March 12, no mention was made of rape. Instead, officers raised the two other allegations.

Mr Elphicke had first been challenged over the ‘fondling’ incident nine moths after it was alleged to have happened.

A Tory source said: ‘Charlie was told a former female employee had made sexual allegations against him. He was told… 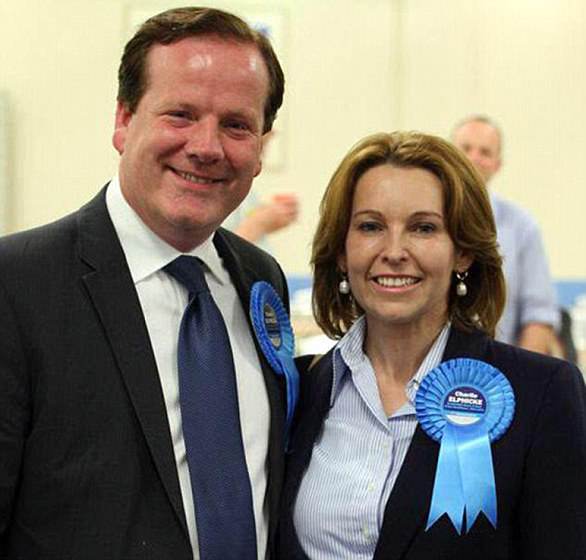 Elphicke and his wife Natalie. She listened as her husband was told serious allegations against him were being reported to the police

‘We can’t have MPs behaving like this. If she goes to police we’ll have

to support her. She says you did not pay her (wages) in full.’

A Whip allegedly tells Elphicke: ‘The payment has been made. She is withdrawing her complaint completely. There is no further action. We have destroyed the papers.’

The ‘Pestminster’ row erupts at Westminster in October.

Smith promoted to Chief Whip in reshuffle after Defence Secretary Michael Fallon sacked for ‘lunging’ at a female journalist and touching knee of another.

9.05pm Elphicke learns Smith has suspended him from Tory Party in a tweet by BBC Political Editor Laura Kuenssberg.

9.07pm Smith leaves voice message for Elphicke saying decision to suspend him taken by ‘myself and the Prime Minister’.

9.10pm Elphicke rings Smith who says he is passing ‘very serious allegations’ to police – but refuses to go into detail. Elphicke’s wife Natalie listens in.

JS: ‘Hello Charlie. In consultation with the Prime Minister I am tonight suspending the whip from you.’

JS: ‘Very serious allegations have been given to us and we have given them to the police.’

CE: ‘I’m not aware of anything. This is extraordinary.’

JS: ‘I’m not getting into a discussion about it tonight.’

CE: ‘What are the allegations?’

JS: ‘I have referred them to the police.’

CE: ‘This is prejudicial to my ability to defend myself.’

Elphicke is told he faces historic sex harassment claim by a second woman who is a lobbyist. He denies it.

Elphicke is quizzed by police. They say former female aide claimed he ‘fondled her breasts’ and ‘touched her leg’ in 2016. Elphicke denies both accusations and says he spent evening having supper with his mother.

Officers also say a second woman alleges he ‘lunged’ at her in lift after drinks at Commons in 2015. Elphicke denies it.

At that time he was summoned to a meeting with the two Whips, including Mr Smith, where he was told the woman had accused him of sexual misconduct and failure to pay her wages in full.

Mr Elphicke said the allegations were ‘b******s’ and denied failing to pay her, saying the payment was ‘being processed’. Shortly afterwards, Mr Elphicke was told the payment had gone through, the woman was withdrawing her complaint and the relevant files had been ‘destroyed’.

Mr Elphicke’s friends also challenge the woman’s claim that he touched her leg while driving her to his constituency after the alleged ‘fondling’ incident.

‘Much later in the day of the alleged leg touching, he dropped her off at a station so she could get the train home and she never mentioned it then or afterwards,’ said one.

The ‘lunge’ complaint by a lobbyist surfaced two days after Mr Elphicke was suspended by Mr Smith. Police told the MP that the woman claimed he had ‘put his arm around her and leaned in to kiss her’ in a Commons lift in May 2015 after they had drinks in Parliament’s Pugin Room.

Mr Elphicke denied it and said the woman’s claim was undermined by the fact that in the intervening period she had stayed in touch and regularly asked him out to drinks and dinner. He showed police one text message which she signed off with a friendly ‘X.’

The MP had first met the lobbyist as part of his work for the Commons Treasury Select Committee. They had also discussed the possibility of her working for him as a press officer.

That became impractical after the 2015 Election, when Mr Elphicke became a Whip – by custom, office holders do not speak in public. He invited her to the Pugin Room to break the news to her over a drink.

Afterwards, he escorted her to the Commons exit via a lift.

The MP told police they retained cordial relations for the next two and half years – until she complained to Tory HQ two days after his suspension in November 2017.

A spokesman for Mr Smith said he ‘robustly denied’ referring allegations against Mr Elphicke to police ‘in an effort to support suspension of the whip’ or that he knew of some allegations ‘some time before they were referred to the police’.