A police patrol car was sent flying through the air after being clipped by a van while speeding through a busy intersection.

The dramatic footage of the collision at 3.18pm on Tuesday in Perth was shared to the Dash Cam Owners of Australia Facebook page, though the footage is actually CCTV.

The police car has its siren and lights when approaching the intersection and the white van hits the brakes but is unable to stop, clipping the right hand rear corner.

Two pedestrians can be seen rushing out of the way on the footpath as the patrol car flips on its side and continues skidding along the street.

Viewers commenting on the clip debated over who was at fault.

‘They (police) must proceed through the intersection with caution even with sirens on. The van hit the skids a bit late but he had right of way as the road rules state.’

‘Van driver will obviously cop a fine for failing to give way to an emergency vehicle. They didn’t approach the intersection with care, regardless of having a green light.’

Others hoped the police officers were okay and some noticed the bus which promptly drives on as soon as the police car flips.

‘That bus driver, he’s gotta get to the next stop,’ one person said. 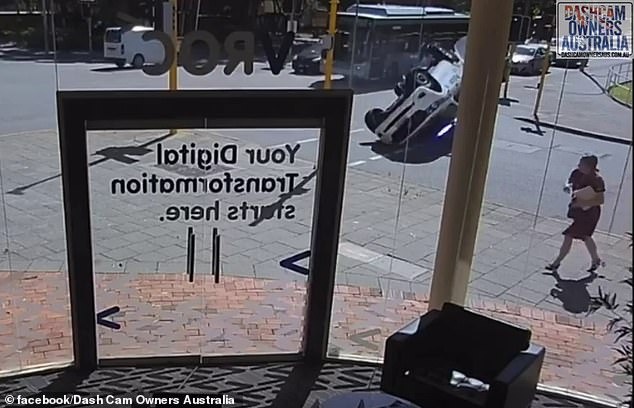