AstraZeneca’s drug pipeline was boosted after European regulators cleared one of its cancer treatments.

The pharmaceutical giant’s Lynparza drug has been approved by the European Commission to treat those suffering from a type of high-risk, early-stage breast cancer.

The approval followed data from a Phase III clinical trial published last June which showed Lynparza reduced the risk of death by 32 per cent.

Approved: AstraZeneca’s Lynparza has been approved by the European Commission to treat patients suffering from a type of high-risk, early-stage breast cancer

The drug was approved for use on breast cancer patients in the US in March.

‘Today’s approval marks a new era of care in Europe for patients with an inherited form of breast cancer,’ said Andrew Tutt, professor of oncology at the Institute of Cancer Research in London who led the clinical trial.

In Britain, around 11,500 die from breast cancer each year, according to Cancer Research UK.

Approval in the EU will trigger a £62million payment to AstraZeneca from US pharma group Merck & Co, which it collaborated with to develop the treatment.

AstraZeneca shares edged up 0.5 per cent, or 58p, to 10720p following the news, further cementing its position as the most valuable company on the London stock market with a value of around £165billion.

The EU approval provides yet another shot in the arm for the company’s cancer drug pipeline following its £1.1billion purchase of US firm TeneoTwo last month, which gave it access to TNB-486, an early-stage experimental treatment for a form of non-Hodgkin lymphoma, a type of blood cancer that can lead to tumours.

Enhertu, another of its cancer drugs which it developed alongside Japanese firm Daiichi Sankyo, has already been approved for use in the EU and the US for certain types of breast cancers. 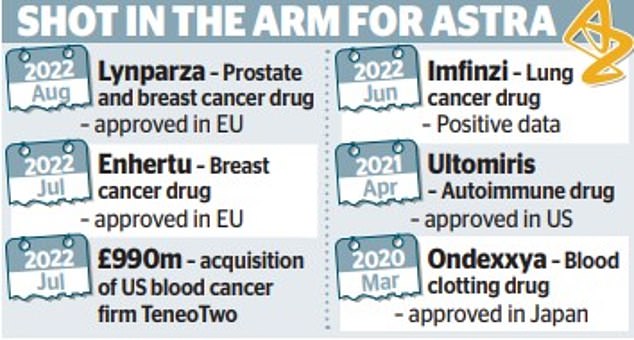